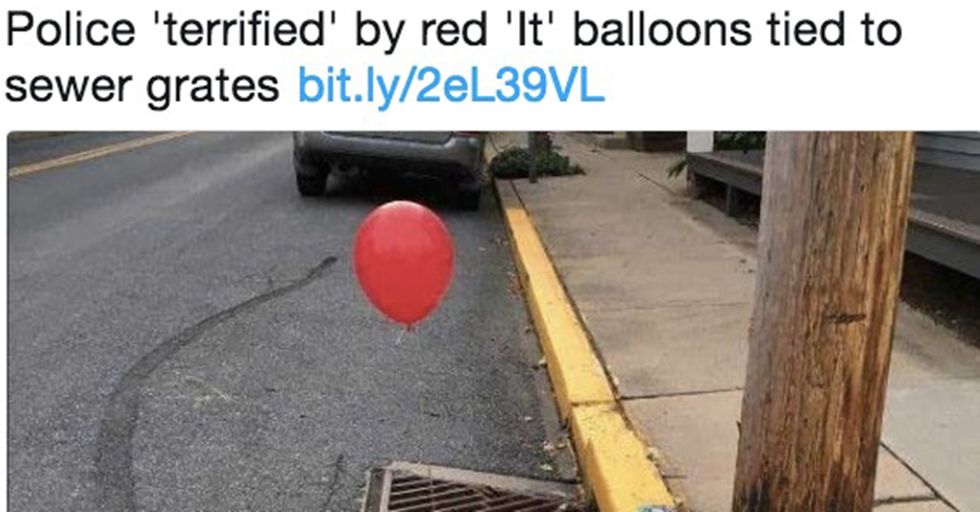 Is the Clown from 'IT' Alive and Well in This Pennsylvania Town?

Few things make people freak out as irrationally as clowns do.

And if you're looking for proof, look no further than a tiny Pennsylvania town that was convinced it was being stalked by a killer clown.

If you're afraid of clowns, you're not alone.

It's the makeup and hidden identity, along with the fact that they're SUPPOSED to be friendly that drive us away crying.

Horrifying. It's not even doing anything and my skin is crawling.

Hollywood's used this to get screams for years, and since everything old is new again, the Stephen King adaptation It is heading back to theaters as a remake.

It's about a clown named Pennywise who (what else) torments people.

His terrifying appearance in a sewer is the stuff of horror film legend.

Here it is. What's scarier than a clown? A clown surprising you from a sewer.

Well, fiction became reality for one small town that had their own run-in with Pennywise the Clown.

Lawerence, KS Police were stumped by the signals, and everyone else was just plain terrified, wondering if this was the real thing or a prank. This was one of just many instances of a clown's balloon tied to a sewer grate. So...what was going on here?

The image alone was enough to freak the cops out.

If you could think of another irrational fear that would scare the police away from addressing a situation, let's hear it. Clowns seem to occupy the top spot on our collective list of phobias.

The cops turned the scare into a recruiting effort.

Albeit a tongue-in-cheek one, but still, I'm sure they're not going to turn away applicants.

They upped the stakes graphic design-wise, offering a somber look with a creepy balloon.

Is this thing expected to recruit people or scare them off? Could it be that they're really looking for backup in taking on their clown phobias?

Then they raised the stakes even higher with this ad. Not only would it scare some folks off, but maybe get them to move altogether.

Still, amid the funny social media posts, the "terror" persisted, and people were getting a little edgy. But also may have gotten a few applicants.

Possibly making a bad case of Clown Frenzy even worse, people started in on the clown memes.

It seems to be only a matter of time before this town's paranoia drove it apart. The case continues unsolved, but another copycat case appeared during the same window of time, leading many to wonder..."Copycat?"

Across the country in Lilitz, PA, police were addressing an eerily similar crime.

They were quick to label it the work of a "prankster," but truthfully, they had no idea. But this case had a quick and awesome resolution when the guilty parties came forward.

They weren't even trying to scare the whole town (though they did). They were just messing with their friend who was afraid of clowns.

Points for the prank. That one got a little more attention than most do, for sure.

Maybe because it was so...thorough. These girls tied balloons to over twenty locations, sure to freak out just about everyone in the town.

There are even more instances of random balloons popping up, many of which haven't been solved or even addressed.

If you're going to scare people, don't do it with clown-based terror. It's just too real.

If this shakes you to your core, you might want to lie low during It's opening weekend.

Or just go see the terrifying film and consider it immersion therapy. Together, we can beat our fear of clowns. (No, we won't.)