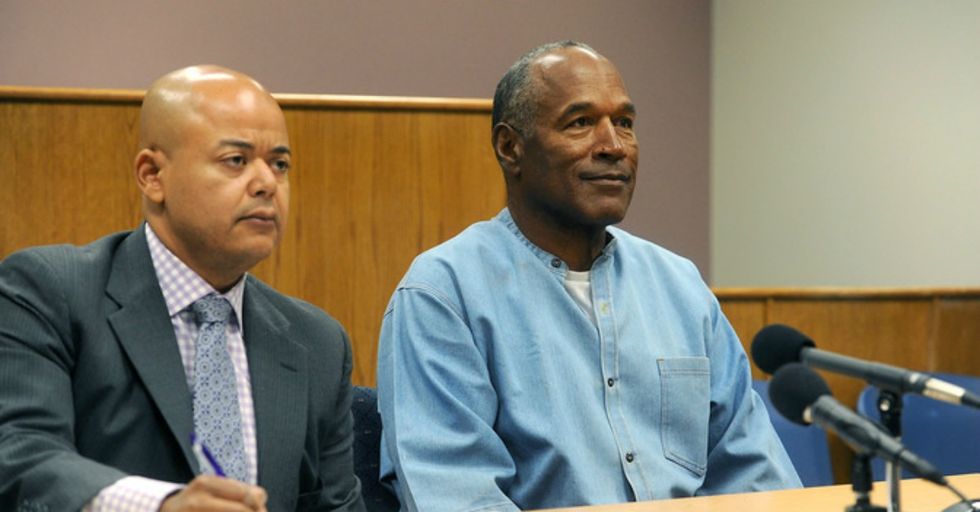 Is the Juice Loose? The Verdict Is IN For O.J. Simpson Parole Case

The Juice, it seems, is loose!

This morning in Carson City, NV, former NFL Hall-of-Fame running back, actor, broadcaster, failed author, and alleged murderer O.J. Simpson was deemed by a panel to be eligible for parole.

Simpson is currently serving 33 years in a Nevada state correctional facility on strong-arm robbery and kidnapping charges stemming from a confrontation with a sports memorabilia dealer back in 2007.

Multiple family members, Simpson himself, and even the victim of his most recent crime testified on Simpson's behalf.

He was sentenced to serve an additional 20 years, which, now age 70, was tantamount to a life-sentence.

This isn't Simpson's first brush with the law. In 1995, Simpson went on trial in the double-murder of his ex-wife Nicole Brown Simpson and her friend Ron Goldman.

Deemed "The Trial of the Century," Simpson went on to be acquitted of all charges, although a later civil suit found him guilty.

Prior to his life of crime, Simpson was an accomplished athlete who won the Heisman trophy while playing for USC and went on to be inducted into the NFL Hall of Fame in 1985.

In 2016, ESPN released a seven-part documentary on Simpson and his rise and then fall from grace called O.J.: Made in America that won the Academy Award for Best Feature Length Documentary. You can watch the Oscar-winning film here. That same year, FX released The People vs O.J. Simpson: American Crime Story which won nine Emmy awards and garnered 22 nominations. You can pick that up here.
Buy Now

Simpson always professed his innocence for the pair of murders, while public opinion continues to be mixed, over 20 years later.

The 1997 civil suit found that he must pay $25 million in punitive damages to the families of Nicole Brown Simpson and Ron Goldman. To this date, he has not yet paid off the fine.

Outside of football, Simpson also was a celebrated actor, broadcaster, and product pitchman, becoming the face of Hertz Rent-a-Car.

His film credits include starring in The Towering Inferno, The Naked Gun series, Capricorn One, and making a cameo appearance in the award-winning Alex Haley series Roots.

Following today's decision, Simpson will be free to return to public life as early as October.

While this decision is bittersweet for many, others feel that he has been rehabilitated and has paid his debt to society. But has O.J. truly changed? Only time will tell. Until then, perhaps he will use his time wisely, and follow through on his promise to track down the real killer.