One participant pointed out that multiple passports are a big warning sign. | 22 Words 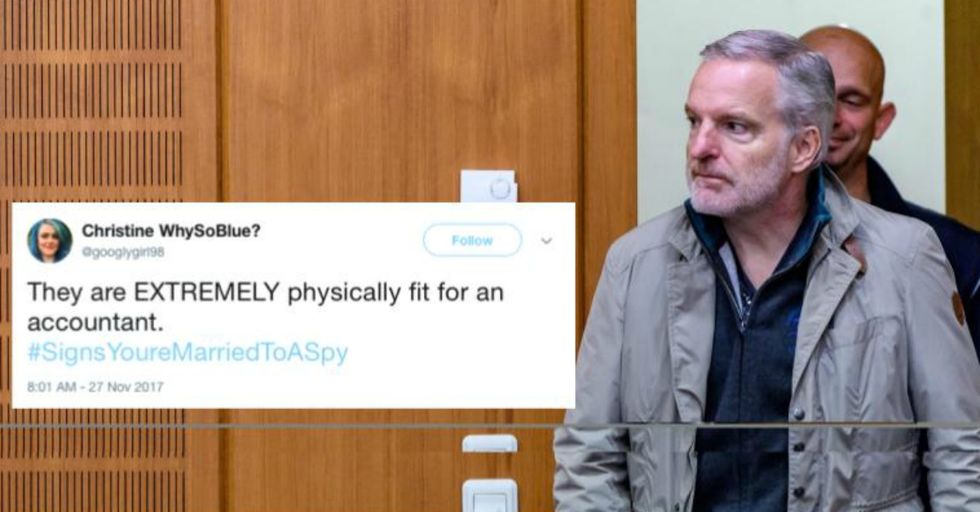 Is Your Spouse a Spy? These People Are Pretty Sure They Can Tell

In the February of 1996, Florida resident Ana Margarita discovered that her husband Juan Pablo Roque was a Cuban spy in the most horrific way ever – news cameras showed up on her front lawn asking her about Roque, who had defected to Cuba three nights ago and was now gloating about how he had fooled the United States government.

Until that moment, Margarita had never even considered the idea that her husband, a former pilot, could be an espionage agent. People on social media, however, think they'd be much more perceptive.

On Monday, Hashtag Roundup, a site that creates trending Twitter hashtags came up with a new game for the social media site.

They asked a simple question of participants. What are the #SignsYoureMarriedToASpy? While this seems like an absurd game, it could happen.

There are many notable examples of people discovering their spouse is a spy.

Look at the case of Ana Margarita. Or Jane Smith, a tech consultant who discovered that her husband of six years was a spy. The fact that she was also a spy is besides the fact. Okay, yes, this is the plot of Mr. and Mrs. Smith, but it could happen. People on Twitter were only too happy to demonstrate exactly how.

One participant pointed out that multiple passports are a big warning sign.

When you’re role playing in bed, they already have a passport for their character. #SignsYoureMarriedToASpy
— Dont Think So (@Dont Think So)1511787776.0

If your spouse has multiple passports, be forewarned – he or she is definitely a secret agent... or a drug dealer... or they just could be multinational. But still – anyone with more than one passport deserves a sideways squint. Or at least a clandestine call to the Pentagon – you know, to make sure they're not really trying to use you to get to the US's nuclear codes.

Another potential spy catcher pointed out the fact that many spies are extremely tech savvy.

That right there, the whole encryption thing – total warning sign. Spies always have the hottest gear for cracking into your computer so they can learn all your habits, steal nude pictures, and listen in on your mother so they make a good impression when she comes to dinner. Just saying.

If your spouse keeps buying supplies that could double as weapons, be on the alert.

Piano wires, as a reminder, can function as garrotes. We assume they're very effective, if bloody. Seriously, that arterial blood spray can get everywhere... we assume – not that we'd know from first hand knowledge or anything, because how could you know that if you slice someone's carotid with a sharp– We digress. Piano wires = bad.

This participant's example was a bit iffy.

Maybe they like recording themselves. This could be one of those newfangled sex games where you record everything and then you make an tape to listen to later. We don't know what you're into.

This one is an extreme warning sign for spies... and cheating.

One of the biggest warning signs your spouse is about to cheat is if they begin paying special attention to their appearance. If their appearance is already waaaay hotter than it needs to be for their profession, then you're in dangerous waters. Not only is your spouse cheating, they're totally a spy.

One participant had a very pointed idea about who's a spy.

This participant had a thought-provoking, if slightly sexist warning.

On one hand, we want to discount this, on the other, how many female friends do you know who know all the ways of getting into someone else's phone and can sniff out deception at a hundred paces... This one is a bit of a toss-up.

One participant gave the most practical, common sense warning sign of them all.

The best way to figure out who's a spy is to be a spy yourself. If you also work at the same organization, then, no surprises there. But if one of you decides to defect to Russia, or Cuba (assuming you're not already a spy for either country) that's when things get iffy.