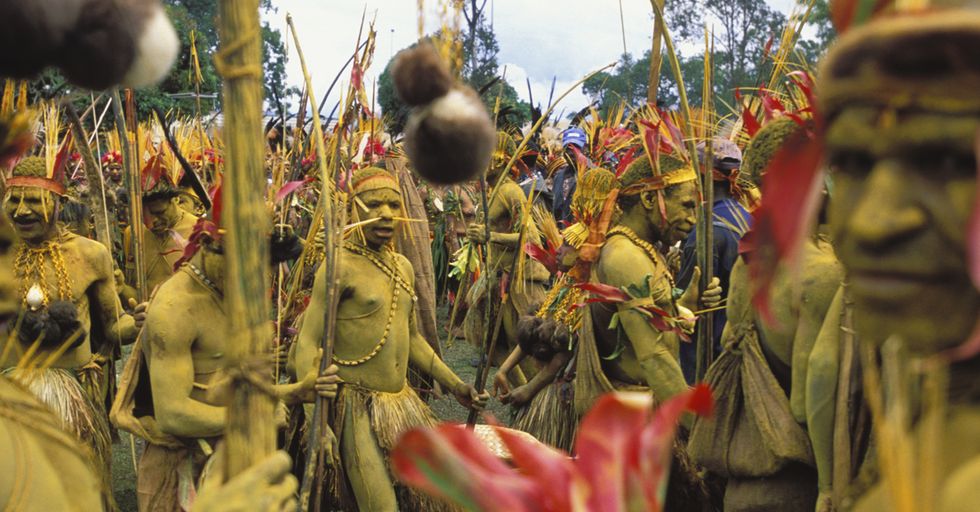 There are many intriguing traits about indigenous and tribal people. Perhaps it’s the stark contrast between their way of life and ours. Or maybe it’s that their life hearkens back to our evolutionary roots, transmuting a sense of knowing within their communities that we have fallen out of touch with.

Although the world is more interconnected than ever, with the prevalence of devices that ding and screens that glare at us, there are still people out there who live a life in preservation to their ancestors. So when you see a photo of a tribal person or read about one of these communities, what you are seeing is a compilation of images and a volume of descriptions; a powerful distillation of who these people are and how they came to be.

The tribes on this list represent a slice of the kind of tribal life that exists today, but I promise it will be eye-opening, regardless.

This tribe is located in Papua, New Guinea and there's a bit of a mystery on how this tradition began. Legend states that the tribe retreating to the banks of the Asaro River to recoup, after being defeated in battle. Upon dusk, the Asaro climbed from the banks covered in mud. The enemy tribe saw this and fled, believing that the Asaro were spirits.

This semi-nomadic tribe roams in western Mongolia. The Kazakhs may be a traditional people, but by our standards they are veritably unique, maintaining an ancient practice of hunting with trained eagles. This custom is kept alive in the yearly Golden Eagle festival, where near 70 Kazakhs engage in eagle hunting as an homage to this approximately 1,000-year-old tradition.

The Huli, of Papua New Guinea, has an estimated membership of 250,000 people within their tribe.  The bachelors of the tribe grow their hair out, to create ornate wigs. These wigs, combined with yellow or red face paint are a unique Huli practice.

Although “gaucho" is a term used to describe for a terribly un-stylish pant in America, the Gaucho people are nomadic tribesmen of the South American prairies. These people are more integrated than your average native inhabitants. Their skilled horsemanship and rural lifestyle have remained a national symbol for countries like Argentina, Brazil, and Uruguay.

This tribe is thriving, with latest census details reporting that the Maasai have 840,000 members. They are located in southern Kenya and northern Tanzania and have a number of distinct customs and features. Among them is the remarkable height for a Maasai individual, with men averaging 6 foot 4 inches and women, 6 foot. They are also known for their coming-of-age ceremony for the warrior, known as an "adumu." This dance involves competitive jumping, where two or more members will step within the circle of ceremony members and continually jump in a narrow posture.

The Nenets live within the Russain tundra. The Nenets inhabit the area between the forest and the tundra, and each group is distinct yet related. Both divisions of Nenets engage in subsistence hunting and reindeer herding to survive in such a harsh environment.

Tibet has a tumultuous history, and despite China’s seeming interference with their population, the people who originally inhabited Tibet are considered to be a distinct ethnic group. One genetic trademark that native Tibetans exhibit is the ability to produce more nitric oxide in their blood and produce more blood flow than the average person. Many attribute this as a direct response to the high altitude living that the Tibetans endure.

The Himba live in Namibia and are among the last semi-nomadic peoples in this region. Due to the semi-arid climate, the Himba have developed unique clothing and body alteration practices. Himba women create a cosmetic paste of red ochre and butterfat, known as "otjize paste," and the tribe members cover their hair and bodies with it to protect them from the harsh elements.

The Maori represent the indigenous Polynesians of New Zealand, who traveled here by way of canoe sometime between 1250 and 1300. They are best known for their haka dance, a traditional performance art that involves a ball of light that is tethered by a string and spun in synchronous patterns. They also incorporate a "waiata a-ringa," and "waiata koroua," which are action songs and traditional chants.

Google this tribe, and you’ll find a bevy of articles about running. Why? The Tarahumara are native to Chihuahua, Mexico and are renowned for their long-distance running. Their settlement patterns are far spread, and as a result, the Tarahumara developed the capability of running for stretches of 200 miles, across rugged canyon terrains. Of course, the Tarahumara aren’t doing this in Nikes – they prefer a minimalist sandal, referred to as "huaraches."

The Sentinelese live on the North Sentinel island, of the Andaman Islands. Their population is very scarcely contacted, and estimates of their membership range from 40 to 500. Their language is unclassified, and their lifestyle is based on hunter-gatherer practices. It’s also apparent that the Sentinelese are not friendly to outside contact, as several expeditions, including a documentary entitled, Man in Search of Man, arrived on North Sentinel island only to be greeted with a salvo of arrows.

The Pintupi is an Australian Aboriginal group who live in Western Australia. The last member of the tribe was said to have left the Pintupi’s original territory (in Northern Australia) in the 1980’s. However, there has been a resurgence in members returning to their original lands, in an effort termed as the "outstation movement."

While perhaps not exactly a distinct group of people, communities in rural southeastern China live very close to the land and practice many of the same traditions their ancestors did, thousands of years ago. They use a style of fishing that involves trained Cormorant birds who hunt in the shallow rivers.

Split between Indonesia, and Papua New Guinea, the Korowai are distinct from other tribes in the region. Instead of covering their genitals with gourds as many other groups, Korowai men opt to tuck it in. However, not unlike many South Pacific traditional cultures, the Korowai are believed to participate in cannibalism, likely as a result of their spiritual beliefs.

The Yali live in Indonesia and Papua New Guinea. They are a pygmy group, with men averaging under 5 feet tall. The men wear a gourd to cover themselves, known as a "koteka," and waistbands made from rattan, a far eastern type of climbing palm.

The Karo are a Nilotic dwelling people, located on the Omo River in southern Ethiopia. They practice flood-retreat cultivation, which takes advantage of the mineral-rich silt left behind after the annual flooding of the Omo River. The Karo are also notable for their body painting practices which use a number of materials including colored ochre, white chalk, charcoal, and crushed iron ore.

An estimated 200 Livonians live on the eastern Baltic seaboard in modern-day Latvia. Unfortunately, hundreds of years of warring and assimilation efforts have greatly damaged traditional Livonian culture. The last individual to learn Livonian as their primary language died in 2013, making the only surviving speakers those who learned Livonian after their first language.

This tribe lives in the rainforests of Ecuador, and they have an unusual skill. They hunt for monkeys with blowpipes. These blowpipes are about 9-feet long each and are loaded with arrows, dipped in curare poison to help paralyze their victims.

Vanuatu is an archipelago (a group of islands) in the South Pacific ocean, and its people are referred to as the Ni-Vanuatu, meaning “of Vanuatu." As we know from Darwin’s exploration of the Galapagos, islands tend to breed a lot of interesting diversity, and Vanuatu is no different. There are over 110 distinct languages, and cultures present on Vanuatu and many of them still adhere to kastom or customs. One such kastom includes a yam harvest celebration, known as the land-diving ceremony. The village males tie their ankles with vines and plummet towards the earth off of wooden towers. This is meant to encourage a bountiful harvest.

Ladakh is a cold desert in the Indian state of Jammu and Kashmir. It houses The Muslims of the Kargil territory and the Buddhists of the Leh territory. Artistic craftsmanship is prided within this region, as members work to create beautiful items for both domestic and religious use out of metal.

The Mursi are Nilotic peoples who live in Ethiopia. They live in the Debub Omo zone, near the border of South Sudan and Kenya. They are among the last peoples who wear large lip plates made from pottery, and girls get their lips pierced at around 15.

The Rabari are a nomadic group of cattle and camel herders in northwestern India. Their name directly translates to “outsiders" which is an accurate depiction of their place in the Indian social caste system. The Rabari believe in creatin by Matadevi, an Indian mother goddess. As such they are primarily matriarchal people, with women conducting much of the business and management of the villages.

The Samburu are considered a sub-sect of the Maasai, but they have several distinct traits. Located in north-central Kenya, the group is largely nomadic and choose to follow their herd animals. The Samburu also base their values in gerontocracy, having a great respect for their elderly members.

The Mustang people live on the border between China and the Tibetan plateau and are considered one of the last bastions for traditional Tibetan culture. Religious life is a principle within Mustang life, and the majority of the traditions are grounded in early Buddhism. Interestingly, many Mustang people believe that the world is flat.

Located in Papua New Guinea, the Goroka represent one of the many tribes who has developed distinct cultures as a result of the difficult terrain of this region. The warrior concept is an important value in Goroka life, and the men of this tribe wear ornate headdresses made from tropical bird feathers as well as shell jewelry to showcase their prowess.

The Akuntsu occupy an Amazonian region in Brazil and are among the smallest groups of extant, native people. This is mainly due to the land that they occupy, which contains rich resources for logging and forestry. The Brazilian government protects its country’s natives, and as a result, loggers cannot log on the Akuntsu land. Though many loggers decided to kill the vast majority of the Akuntsu and today, only 4 members remain.

The Aleut are indigenous to the Aleutian islands, which are divided between Alaska and the Russian administrative territory, Kamchatka Krai. As you can imagine, the climate here is unforgiving. The Aleut traditionally lived in Barabara, a type of underground housing.

The Tuareg are a sub-sect of Berber people. They are commonly referred to as “the blue people", as they are famed for their indigo clothing and dye.

The Kayan are an ethnic minority in Myanmar, and the Kayan Lahwi is a portion of this ethnic group. Among their distinct features are their brass coiled necklaces, which the women begin wearing when they are near 5-years-old. The practice works by depressing the collarbone to create the illusion of the neck lengthening.

These people are one of the twelve Adyghe tribes, which belong to the Circassian people. Circassia is a region the encompasses the land northwest of Georgia, bordering the Black Sea. Although the majority of Abzakhs live in diaspora in Turkey, they once thrived in the mountain slopes, using horses for transport and mining iron, copper, lead, and silver.