Oprah accepted the Cecil B. DeMille Award at the Golden Globes for her outstanding achievements in and contributions to the world of entertainment. | 22 Words 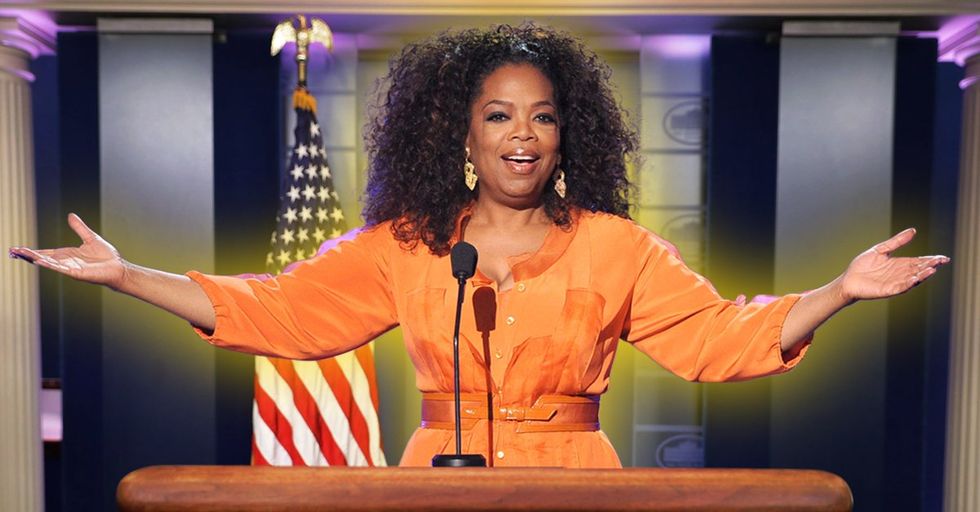 Despite the Hype, Oprah Running for President Would Actually Be Terrible

President Winfrey? President Oprah? What would we call her?

The name debacle is one of the many reasons Oprah should not be president. When she tore up the stage with a moving, inspiring speech at the Golden Globes last night, the Internet started gunning for #Oprah2020. And reportedly, she's actually thinking about running.

But this is a bad idea for so many reasons, reasons that I will enumerate below. Oprah is far from the worst person in the world. In fact, the good she does probably outweighs the bad. But that doesn't mean she should be in charge of our government.

Oprah accepted the Cecil B. DeMille Award at the Golden Globes for her outstanding achievements in and contributions to the world of entertainment.

Not politics. Entertainment. (Just going to periodically remind you of this throughout the article.) Oprah took to the stage and delivered an impassioned, beautiful speech in which she expressed her support of the brave women and men of the #MeToo movement and her faith in the changing tide when it comes to the power dynamics between men and women.

You can watch the whole thing here:

It really is a stunning speech, and it rightfully brought the house down. "I want all the girls watching here and now to know that a new day is on the horizon," Oprah said, "and when that new day finally dawns, it will be because of a lot of magnificent women, many of whom who are right here in this room tonight and some pretty phenomenal men fighting hard to be sure they are fighting hard to take us to the time when nobody has to say 'me too' again." A reasonable reaction to this would have been, "Oprah is a queen and did everything right. She used her significant voice to empower women and inspire the countless people at home who may not have thought they had the power to stand up for themselves. Wow, Oprah did a great thing. I can't wait to keep watching her shows and supporting her causes and her products."

An unreasonable reaction would be, "Oprah gave a good speech so now this billionaire talk show host should be President of the United States." But that's exactly what happened.

#Oprah2020 quickly took the reins of Twitter, and at first, it was hilarious. Yeah! Oprah should be president! Gayle should be vice president! Stedman should be whatever position Ivanka Trump has in the White House! But no. People were serious. They earnestly want Oprah Winfrey to run for president.

And apparently, Oprah is actually seriously considering it.

Two of Oprah's close friends told CNN that following her Golden Globes appearance, Oprah is "actively thinking" about running for president in 2020. She's deflected questions about running for office in the past, but apparently, things have now changed. Even Meryl Streep wants Oprah to run for president. And when Meryl Streep thinks something, it usually comes to fruition.

Someone even went so far as to add Oprah to the Wikipedia entry for the Democratic party presidential nominees for 2020.

It's getting out of hand. What many of us thought was a light-hearted joke has now become a real possibility. And there are just so so many reasons why this is a bad idea. Ready? 'Cuz I'm going to get into them right now...

First, we must imagine what the United States of America would look like under President Winfrey. Everyone would get a car!

That may seem great, but think about the fossil fuel emissions. Also yeah, I know not everyone would get a car if Oprah was president, but this highlights an actual problem with a potential Oprah presidential run...

What does Oprah believe? She loves bread. That's all I know about her.

I know she loves bread, and I know she likes to give away large objects, and that's about it. What are Oprah's political platforms? Is she pro-choice? She liked Obama, and she doesn't seem to like Donald Trump, but what's her stance on the Israeli-Palestinian conflict? How does she plan to combat institutional poverty?
Sure, these are likely things that we would learn about Oprah when she hit the campaign trail in what I can only imagine would be the most luxurious custom bus ever made. But right now? We know very little about her actual politics. And that's what has made her so popular. People love Oprah because she is universally lovable. Once she's forced to take a political stand, the universality of her likability will automatically go kaput. Ira Madison III put it succinctly when he wrote, "I recognize that Oprah doesn’t just reverberate emotionally in Hollywood but in America as a whole, but do you understand why that is? It’s because Oprah doesn’t decide how much you pay in taxes. Oprah doesn’t send drone strikes. Oprah doesn’t have to be friendly with racist, homophobic or misogynist politicians in order to pass legislature." If Oprah doesn't have her likability, what does she have? Who is she? We don't really know.

All politicians have skeletons in their closet, and here's the thing: So does Oprah.

The second she runs for president, the second someone else, another candidate, will try to destroy her. And because Oprah is seen as a goddess, put up on a pedestal as a mythical, infallible force, all this opponent would have to do to take her down is to reveal what she is: a human being.
It's not cool to say, but Oprah is not perfect. In fact, she's far from it. Oprah has f***ed up a bunch, and she has rarely if ever been called out for it because she's not seen as a fallible human being. To call out Oprah is to destroy the concept of Oprah. But sometimes, she sucks. Over the years, she has bolstered the careers of shady "doctors" like Dr. Phil and Dr. Oz. Winfrey once had Jenny McCarthy on her show and promoted her book. Yeah, Jenny McCarthy, the anti-vaxxer. Since then, there's been a gradual increase in the cases of measles in the U.S. Coincidence? Maybe, maybe not.

And remember that time Oprah Winfrey destroyed author James Frey because she looked like an idiot for putting his discredited memoir on her book club list?

Yeah, it was messed up that James Frey lied about the details of A Million Little Pieces, but the warpath Oprah went on when she found out was also more than concerning.
She had oodles more power than James Frey did and could have let him wither away into obscurity. But instead, she decided to use her power for evil.

A powerful person who lifts up or destroys people less powerful than her for her own personal gain? Hm. Reminds me of someone else.

Sure, on some level it's egregious to compare Oprah to Donald Trump. Let me be clear when I say that they are not the same and Donald Trump has done far more damage to this country than Oprah Winfrey has.
However, and there is a however, billionaire TV stars and business moguls who have made careers out of putting themselves first shouldn't be in the White House. We've tried it; it doesn't work.

The United States cannot make any more a fool of itself than we already have.

Elect a rich reality TV star once, shame on us. Elect a rich reality TV star twice — no matter how opposite in belief systems they seem to be — shame on us exponentially more. I'd love to be proven wrong and for President Oprah to be a delight, but maybe she could start as, like, a mayor or something and work her way up from there. Our next president should be a person who knows how the government works, who brings experience to the job, and who has never had Tom Cruise jump up and down on their couch.