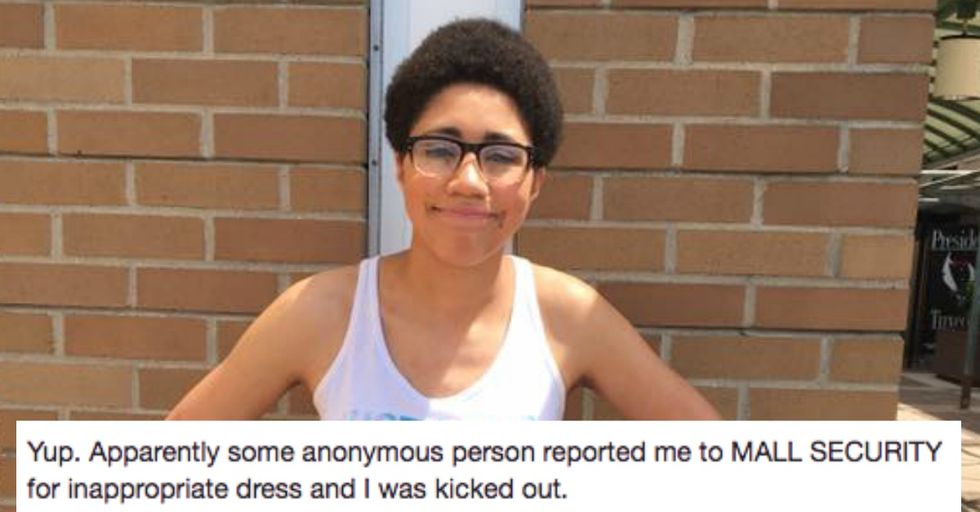 I'm coming to you from Grand Rapids, Michigan, which is important because that's also the setting of this story.

Right now in Grand Rapids, it's about mid-90s temperatures with humidity so thick it's like sticking your head in an oven, which does wonders for your hair. If you're lucky, you're in air conditioning.

If you're SOL with the air situation, you're probably trying to hang out somewhere nice and cool — like the mall — wearing shorts and a tank top or T-shirt.

Shopping malls are generally thought to be places where casual dress is encouraged.

Of course, "casual dress" is a very relative, subjective term that can lead to a lot of confusion among people, especially in a place that's for customers just dropping in and out.

So people generally wear whatever they want to the mall.

Anything goes at the mall - some malls, anyway. The all have their own policies and practices, which is where some of the problem lies, as you'll see.

The mall is a place where all walks of life come together, where everybody can decide how they look.

But ultimately, as a private place, the mall management has the say on what goes on and what doesn't.

But if you were to go to Woodland Mall, like Grand Rapids resident Hannah Pewee did this weekend, that outfit might just get you kicked out.

via: Chris Foote for Google Maps

That's right. Setting a new record for quickest summer-related, clothing-shaming incident is the mall security guard who told Pewee her outfit was "inappropriate." Are you ready to see this get-up?

NOT A FINDING DORY TANK TOP! She shared the picture on Facebook with this caption: "As many of you know, it is NINETY degrees outside today in West Michigan. Aka, really hot. So, of course, I decided to dress for the weather: shorts and a tank top. But apparently, how I was dressed (see photo below) was too slutty for the public, as I was kicked out of the Woodland Mall today. Yup. Apparently some anonymous person reported me to MALL SECURITY for inappropriate dress and I was kicked out. Never mind that within a one foot radius there were plenty of girls dressed just like me, since it's NINETY degrees outside. I am so angry right now I'm shaking. I felt so embarrassed I almost cried. All because a stranger didn't like how I dressed. The Woodland Mall should be ashamed of themselves, as well as that anonymous complainer. It's my body, and it's hot outside! I'm not going to show up in jeans and a sweater, sorry. Don't like it? Look away! I was out having a fun time with my sister and next thing I know, I'm out on the street. Slut-shaming how girls are dressed is deplorable and outdated, and it needs to stop."

Pewee's post has been shared over 8,000 times, and as you can imagine, hundreds of commenters agree it's ridiculous.

The Woodland Mall's code of conduct states only the following in regards to customer dress:

"Appropriate attire, including shirts and shoes, is required. Clothing with inappropriate words, phrases or graphics is not permitted and is subject to mall management approval. Excluding attire worn in accord with religious practice, tradition or significance, deliberately obscuring the face is prohibited." That's about as clear as mud.

A dress code like that is bound to be applied inconsistently.

It's a miracle that a controversy like this hadn't happened sooner. But when it does happen, people make a huge stink about it, which is completely understandable. People don't want to be told how they SHOULD appear.

But Pewee has since spoken with Woodland Mall management, and has received an apology:

They also issued a public apology to MLive.com: "We apologized to the shopper and the public for the way that this was handled. We've already spoken to her and are working to make things right. We work to create a fun and safe shopping and dining destination but failed to deliver on that message for this shopper. We're working internally to make sure we fully deliver on excellent experiences at our Mall immediately."

Yeah, probably a good idea considering SHE WAS WEARING A DISNEY SHIRT!

And it's not like she paired it with a g-string and stilettos, at least not out in public. As for Pewee, she said, "Style has evolved and they need to be aware that people are going to dress how they want to dress," she said. "If public malls want to have a dress code, that's their choice, but consumers need to be made aware of this dress code so we can decide whether or not we want to shop there." Exactly.

Of course, that doesn't mean we need to go crazy.

Yet, some people's style of dress IS kind of crazy, so there will always be an issue with people pushing the bounds of good taste with their dress. It's not going to go away.

Hopefully, the Woodland Mall is now a welcoming place for all.

Well, until the next time someone shows up, rightly or wrongly, in an outfit that the powers that be deem "inappropriate" for their stores and the masses.

Even people in Disney shirts.

Society is ready for people in all kinds of tank tops to walk around in public. Even if people with more refined senses of fashion think otherwise.
20%