'It Was Me!': Trump Goes On Rant, Continuing to Complain About Those 'Ungrateful' UCLA Players | 22 Words 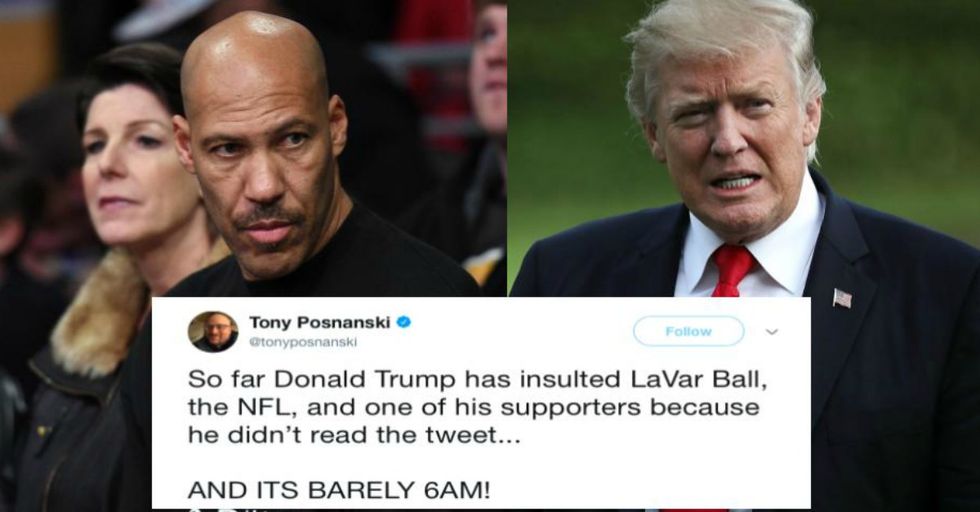 'It Was Me!': Trump Goes On Rant, Continuing to Complain About Those 'Ungrateful' UCLA Players

Donald Trump HATES it when he's not given his due. Especially on that most hallowed of times for thanking people – the Thanksgiving holiday. He especially hates it when those people are people of color or women. The President has a long history of going after women, or people of color for perceived slights (bonus points if they're both), while failing to do the same any time he's presented with the specter of a white male. Again, we're still waiting for him to respond to Eminem's excellent diss track.

It is no surprise, then, that Trump is now going after the Ball family.

The Ball family is composed of patriarch LaVar Ball, a man almost as ostentatious as Trump, and his three sons of varying NBA readiness Lonzo, LiAngelo, and LaMelo (eldest Lonzo is already in the NBA), who now have a TV show called Ball in the Family.

Patriarch LaVar Ball, as you may recall, is the man responsible the $495 sneaker fiasco.

Ball is such a loud and ostentatious blowhard that he has caused his eldest, Lonzo, to become the most bullied rookie in the NBA, damaged his youngest's chances of playing college basketball, and completely tarnished his own former reputation as a nice, protective father.

So, basically, he's a perfect mirror for Trump...

After all, Trump is, himself, the definition of the word "blowhard," which, according to Merriam-Webster, is a "braggart" or "windbag." In fact, the dictionary even mentions Trump in an example of the word: "But Mr Trump’s blowhard talk risks provoking Iranian hardliners anyway."

The point here is, it was only a matter of time before Trump and Ball would come head to head. And head to head they did, in the most spectacular fashion.

It began, as most things do, with Louis Vuitton – as in the Louis Vuitton store in Guangzhou, China, which is where Ball's middle son, LiAngelo, stole sunglasses along with two of his other UCLA teammates on Nov. 7.

The trio were in China for a UCLA game against GA Tech.

The store was reportedly close to their hotel, and the the trio were swiftly detained by Chinese police and confined to their hotel rooms. They were allowed to play the game, however, but they were not allowed to leave the country.

Trump was in China on his grand Asia tour when the boys were detained.

He reportedly spoke personally to Chinese president Xi Jinping to help resolve the issue. “They’re working on it right now," he told reporters during a press conference. "Hopefully everything is going to work out."

Thanks to Trump's intercession, the players were released and sent back home.

They have reportedly cooperated with Chinese authorities and are now indefinitely suspended from playing basketball. "They will have to earn their way back," coach Steve Alford said during a news conference.

They also thanked Trump during a news conference (and the Chinese police for their nice treatment) as well as apologizing to their school and families.

“I would like to thank President Trump and the United States government for the help they provided. I am grateful to be back home and I will never make a mistake like this again. I am extremely sorry for those that I let down," LiAngelo Ball said, reading from a script.

But his father was not so contrite.

In an interview with CNN, Ball said, "Did [Mr Trump] help the boys get out? I don't know," adding, "It wasn't like [Mr Trump] was in the US and said, 'OK, there's three kids in China. I need to go over and get them.' That wasn't the thought process." Ball further stated that if he was going to thank anyone, it would be Xi.

Trump, of course, was not pleased.

He blasted Ball on Twitter, saying, "Now that the three basketball players are out of China and saved from years in jail, LaVar Ball, the father of LiAngelo, is unaccepting of what I did for his son and that shoplifting is no big deal. I should have left them in jail!" You'd think that would be the end of it, right?

Wrong! Ball came back mouthier than ever, questioning why the President was so concerned about his words.

"That's on your mind, that a father didn't say 'Thank you'? And you're the head of the US?" Ball said. “Come on. There's a lot of other things that's going on. Let him do his political affairs and let me handle my son, and let's just stay in our lane."

Of course, this incensed Trump, who quickly shot off a Tweet-storm early Wednesday morning.

It wasn’t the White House, it wasn’t the State Department, it wasn’t father LaVar’s so-called people on the ground in China that got his son out of a long term prison sentence - IT WAS ME. Too bad! LaVar is just a poor man’s version of Don King, but without the hair. Just think..

...LaVar, you could have spent the next 5 to 10 years during Thanksgiving with your son in China, but no NBA contract to support you. But remember LaVar, shoplifting is NOT a little thing. It’s a really big deal, especially in China. Ungrateful fool!

Actually, scratch that. Trump is literally the President of the United States. He should be above squabbling like a Real Housewife on Twitter. Also, his rants against Ball, again, followed the usual Trump pattern of going after minorities.

Many people on social media also felt the same.

It's okay to be upset if you feel someone is being ungrateful. It is not, however, okay for the freaking President of the United States to tarnish the reputation of the office and the dignity of the country by acting like an idiot on Twitter. Happy Thanksgiving.