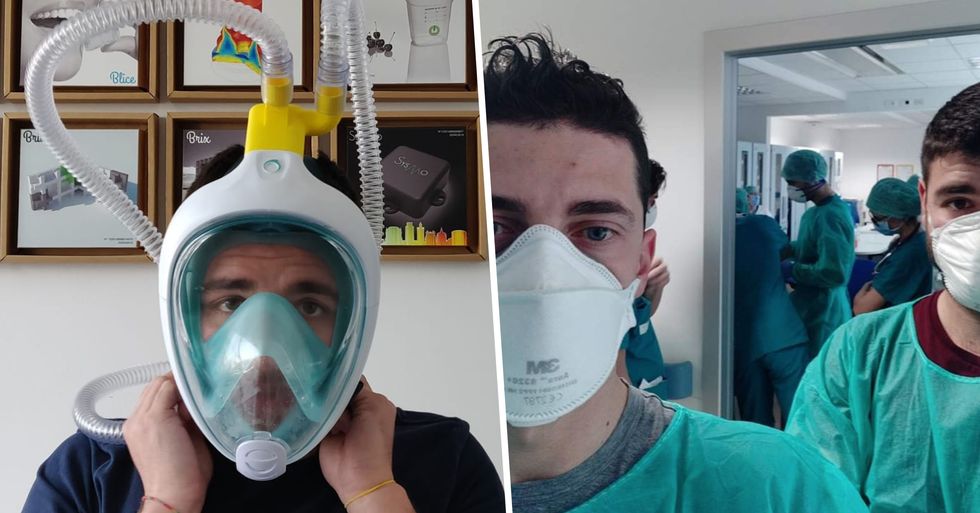 During this nightmare COVOD-19 pandemic, people all around the world have either been left without work or they have been completely overworked... especially people who work in hospitals.

Healthcare workers are under a huge amount of strain, but thankfully, Italian engineers are on hand to help.

Keep scrolling to learn about the emergency ventilators that have been made to help hospitals...

And common symptoms include fever, coughing, shortness of breath, and breathing difficulties. But for patients who are elderly and have existing health issues, the virus can lead to pneumonia, severe acute respiratory syndrome, kidney failure, and even death.

More than 300,000 people all over the world have now been infected with the virus...

360,824 to be precise. And, devastatingly, a staggering 15,495 more have been reported to have died from the illness.

Because, fast forward 3 months, and nearly every major country in the world has been infected by the virus, with some of the worst affected being Japan, South Korea, Russia, Italy, the United Kingdom, Iran, and Spain.

Italy has gone into total lockdown...

Italy is now the most affected country next to China...

The situation in the country right now is severe...

Right now, 5,476 people in Italy have died from the virus... which goes to show the terrifying speed of which it is spreading.

Hospitals in Italy are buckling under the pressure...

It all started with a snorkeling mask...

Engineers from a Brescia-based startup firm are making ventilators out of snorkeling masks and fitting them with 3D-printed respiratory valves in an inventive plan to keep the hospitals supplied.

They are being offered to hospitals in the region of Lombardy free of charge...

The crucial part of the equipment is the 3D-printed "Venturi valve," a device named after 18th-century physicist Giovanni Battista Venturi which connects the mask to an oxygen tube.

Hospitals in the region are already running short of ventilators...

Which is one of the most common and most severe symptoms of the virus.

Although the specialist masks and ventilators are currently in short supply...

Engineers hope to combine the valves with more plentiful equipment such as diving gear and gas masks.

This is a step in the right direction...

And we hope that, eventually, this crisis will be kept under control. Make sure to keep scrolling to learn about how Harvey Weinstein has tested positive for the coronavirus...