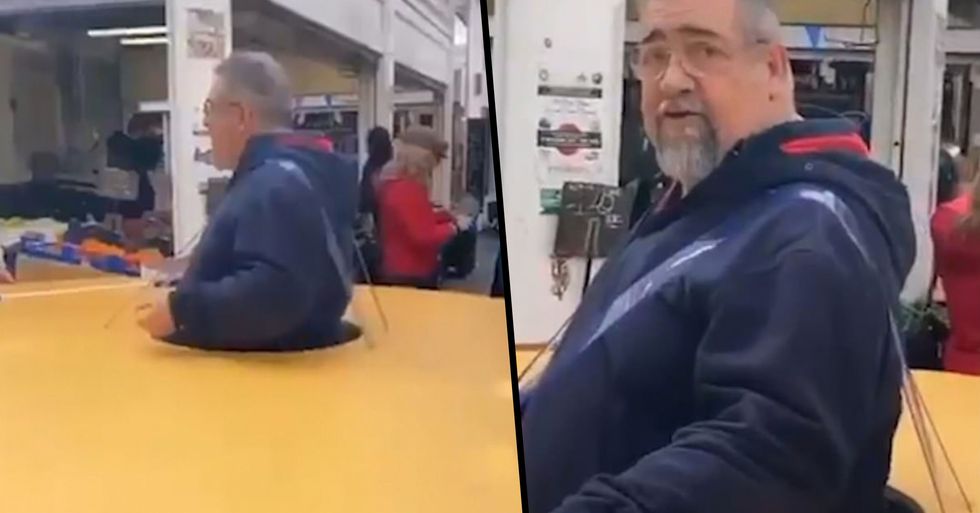 In the mass hysteria that the coronavirus pandemic has brought with it, people are going to pretty extreme lengths to protect themselves.

But now, one man may have beaten them all when it comes to these totally bizarre methods... By donning a giant disc to prevent anyone from getting too close to him.

Keep scrolling for the full story, and to see some of the weird, and slightly worrying, efforts people have gone to in order to protect themselves...

Though some people are going to more extreme lengths than others...

And have been taking matters into their own hands to protect themselves from the virus.

And, while most are simply opting for face masks...

Other people, mainly travelers and commuters, have been opting for some rather ridiculous methods of protection.

It seems that some people would rather suffocate than catch the virus...

Back in January, an entire family was captured, standing patiently in a check-in queue, while all wearing giant plastic bags that covered their heads and torsos.

And, shortly after that...

A different family were seen walking through Hong Kong airport with plastic bottles wedged around their necks. Logic.

And some passengers didn't even feel safe on the airplane...

But now, one man may have topped all of these...

And it doesn't involve the risk of suffocation.

A commuter in Italy, which is one of the worst affected countries, has gone viral for his tactic at avoiding the virus.

It's a giant disc.

In the clip, which was filmed on Instagram Stories but shared to Twitter, shows an unidentified gentleman strolling the streets of Rome while wearing his 1 meter wide disc.

He is asked why he is using such a contraption...

To which he replies: "For coronavirus!", with Daniel laughing and replying, "Wonderful. I can't cope!"

However ridiculous the disc may look...

It might actually work! And it called for some great puns... But I implore for all of you - Please don't start wearing giant discs. And if you really want to, at least take it in turns. The coronavirus pandemic is developing, and we will be posting updates regularly.