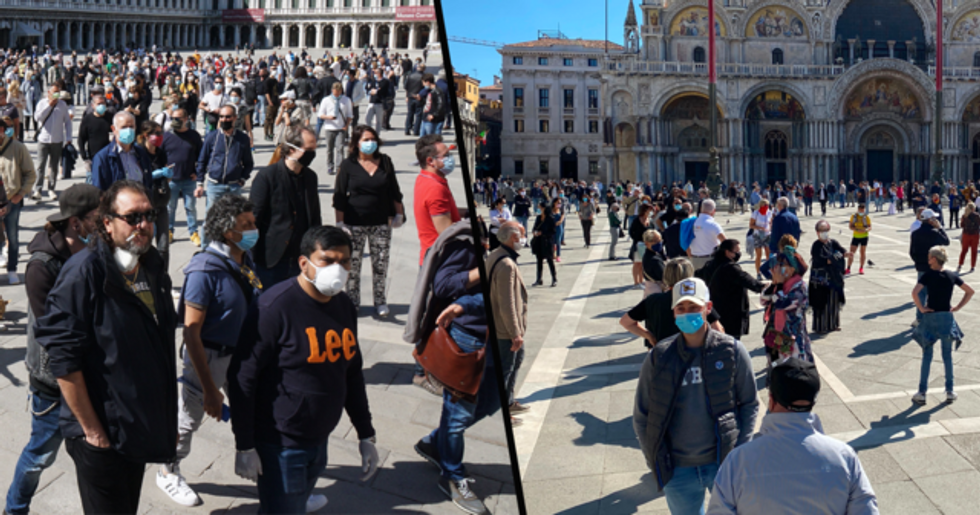 As Italy begins to ease out of its strict lockdown, it's streets are crowded and bustling with life once more... But some people are a little concerned.

Out of all the countries in the world, Italy has been by far one the worst affected.

At the start of March this year, the European hot spot went into full lockdown in a last-ditch attempt at preventing the spread of the deadly virus.

But their efforts were to no avail.

Italy was hit notoriously hard by the pandemic, and over the last few months, a devastatingly high number of people have passed away.

As it stands, Italy holds one of the highest death rates in this pandemic.

After China, it is officially the worst-affected country in the world. Over 211,000 Italians have been confirmed to have the virus, and a further 28,884 have sadly died as a result.

Their lockdown has been long and brutal.

For 2 whole months, everything apart from grocery stores and pharmacies have been closed indefinitely, with Italians not even been permitted to leave the house for exercise.

For the first time in decades, Italy's streets have been left completely deserted.

But, amid the darkness...

There have been shining beacons of light.

Locked down citizens truly banded together during the crisis.

Last month, footage from all over Italy was emerging that showed neighbors singing together from their balconies and windows.

Despite the difficult living conditions, Italians joined forces to help each other through the pandemic...

People of my hometown #Siena sing a popular song from their houses along an empty street to warm their hearts durin… https://t.co/fXOdrd7X6R
— valemercurii 🌍 (@valemercurii 🌍)1584053089.0

It was truly beautiful to see.

And the Italians' solidarity hasn't been the only positive thing to come out of this crisis.

As a result of the lockdown, Italy's tourist hotspots, which are usually teeming with avid travelers, have been completely deserted, thus giving their natural environment a chance to breathe.

Wildlife has finally returned to Italy.

Now that humans are locked away from the outside world, our planet has been given the chance to heal - Take the canals of Venice for example.

Their waters are now full of life.

A variety of wildlife has returned to the canals of Venice, including fish, swans, and even dolphins.

Coinciding with their lockdown and the sudden lack of people in the streets, the nitrogen dioxide emissions over Italy have been gradually dropping over the last couple of months.

And now, there is light at the end of the tunnel.

Italians far and wide are breathing a huge sigh of relief as their country enters the first stages of lifting the lockdown.

4.4 million Italians returned to work today, and various shops, restaurants, and bars have slowly begun preparing to reopen their doors in June.

Though social gatherings are still prohibited, families are now allowed to visit each other, putting an end to the awful social-distancing measures once separating them.

And now, the streets are busier than ever before.

For the first time in 2 months, the streets of Italy are busy and full of life once more... And people couldn't be happier.

Train platforms and bus stops were full once again...

And the streets were full of commuters heading back into work.

Italians are enjoying a taste of much-deserved freedom.

Pictures from all over the country are emerging, showing streets that are bustling with life. It's almost like a pandemic never happened.

Yet, despite Italy's great news, many people are a little concerned about their bustling streets.

@MailOnline I don’t understand this at all? While the infection is still in the community, How will this NOT lead to a 2nd wave?
— Chris Newton (@Chris Newton)1588596907.0

After working so hard at containing the virus, won't crowds of people trigger a second wave?

We can't remain in lockdown forever... At some point, life simply has to go on. For more on the gorgeous country of Italy, keep scrolling to read about the houses that are on sale for one dollar...