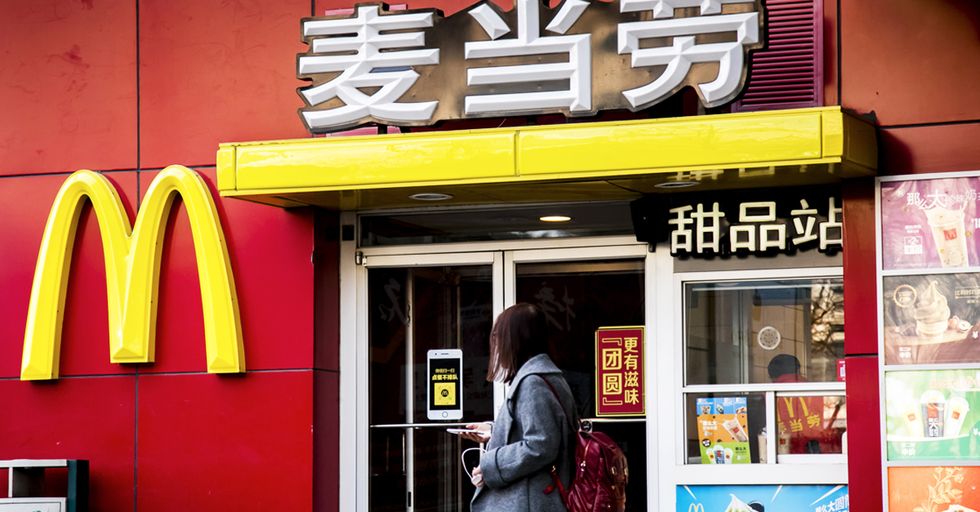 It's nice to know that no matter where your travels take you, you can count on some consistency.

No matter where you go in the world, you're sure to recognize something. Maybe it's something as simple as a bright blue sky or the smiling faces of people around you.

Or maybe it's McDonald's.

They're located in more than 100 countries around the world! But even though the golden arches may look familiar, there are some menu items that you certainly won't find in the good ol' U S of A.

This sandwich is available in Japanese McDonald's restaurants. It's just like the Filet O'Fish you might recognize, except the "filet" is made of shrimp that have been formed into a patty and then breaded and fried.

The burger is coated with a teriyaki glaze. It looks pretty delicious!

Morinaga is a popular Japanese candy company. This McShake uses the flavors of their famous caramels.

Here's another thing you'll only find on the Japanese McDonald's menu:

It's called Shaka Shaka chicken. It includes a little envelope of special seasonings that pour into the chicken packet, then you shake the whole thing around to coat your chicken in extra flavor. Next, let's see what the McDonald's restaurants in Russia have to offer...

This Russian McDonald's treat is a shrimp roll. It's breaded shrimp, lettuce, onions, and a special sauce, all wrapped up in a wheat tortilla.

How about some Rustic Potatoes? They look like pretty basic potato wedges, but what a treat to see them at McD's!

On India's Mcdonald's breakfast menu, you'll see something called a McEgg. It's a sandwich made from a steamed egg, mayo, and onions and seasoned with masala.

As you may already know, a lot of people in India are vegetarian, so it makes sense that there'd be several veggie options on the menu. This veggie patty is made from spinach and corn. If you like pizza, you might like this next dish...

It's called a Pizza McPuff!

That is probably the most entertaining name for something on the McDonald's menu that I've ever read. This one is a veggie version containing carrots, bell peppers, beans, onions and peas in a crispy pizza dough pocket.

How about a Spicy Paneer Wrap?

Fans of Indian food will recognize this soft, mild cheese. For this dish, they dip the cheese in a batter and fry it, then wrap it in a tortilla with veggies, mustard, and cheese.

Here's a dish from Thailand:

It's called the "Mickey Mouse" and is some type of chicken and rice dish. The Thai McDonald's menu actually features several different meat and rice combos.

They also serve this soup:

It's called McMacaroni Soup. There's not much info about it on their website, but it appears to be a simple soup of macaroni noodles in broth with carrots, peas, corn, and onions.

Here's a burger from the Mexican McDonald's menu:

It's a BBQ Crispy Onion burger! If this burger looks good to you, you're in luck! It's also available at some U.S. locations! This next menu item is for all the guac fans out there...

It's the Guacamole Burger.

Try the McMolletes! They're made from warm bread topped with refried beans, cheese, and pico de gallo.

This dish can be found in Hong Kong McDonald's restaurants:

It's pretty different from what you might order for breakfast at your local McD's. It's called the Good Morning Breakfast and it's made from veggies, pasta, and an egg.

It uses the same pasta and veggies but with the addition of some grilled chicken. I would definitely try it!

Finally, our last stop brings us to New Zealand.

There, you can order a Georgie Pie. It's filled with minced steak and cheese and is baked fresh in the restaurant. Share this with your favorite world traveler!