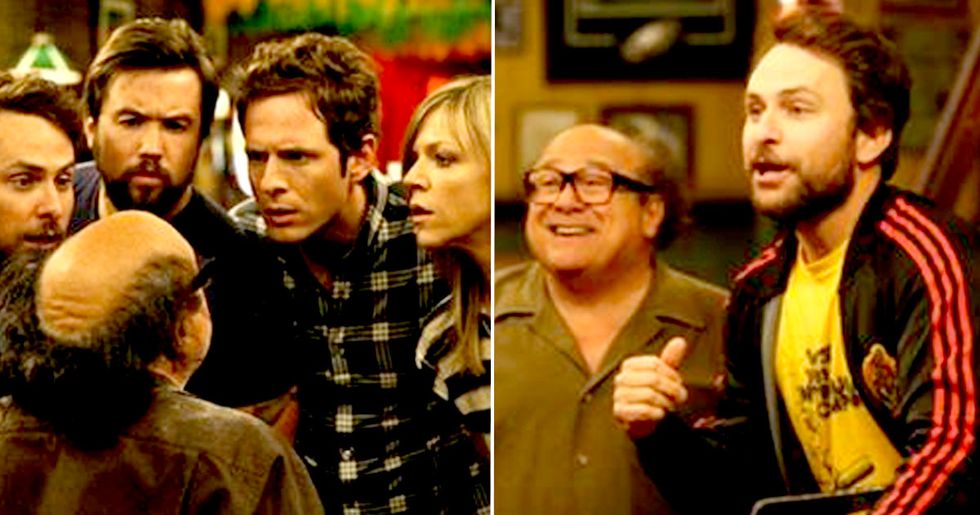 It's Always Sunny in Philadelphia Season 14 Arrives on January 19th

It's one of the longest running series' of all time and has one of the largest ever cult followings. Yes, that's right, I'm talking about It's Always Sunny In Philadelphia.

And if you're one of the show's many, many fans, then you'll be absolutely delighted to know that the show is coming back for its 14th season on January 19.

Let's start off with a bit of background infomation about the show.

It's Always Sunny in Philadelphia first debuted on FX (later moving to FXX) during August 2005 and quickly cemented itself as a cult favorite.

But it started from very humble roots.

When the sitcom began production, it was given less than a thousand dollars by FX to make the first season. It's amazing that they even pulled it off.

They may have been strapped for cash, but it was all worth it.

The show has garnered a huge fanbase over the years, and with good reason... it's really funny.

The sitcom centers around "The Gang," a group of 5 misfit friends.

Each member of "The Gang" displays questionable behavior, such as excessive drinking and unlikeable personality traits such as dishonesty and egotism.

So, basically, it's like Friends but the pals aren't as nice.

The show centers around brother and sister, Dennis and Dee Reynolds, and their friends Charlie and Mac who all co-own the unsuccessful "Paddy’s Pub" in Philadelphia. Together, along with Frank Reynolds, played by the hilarious Danny DeVito, they form a gang consisting of pretty much the most egotistical people in the whole of America.

Despite being a comedy, the show has also been praised for covering hot topics.

Issues such as white privilege, the conflicts between religion and the LGBTQ+ community, and the #MeToo movement have all featured in storylines. But it seems that's why people love it so much - it dares to do what others won't.

When the show was renewed for a thirteenth and fourteenth season in 2016, the true scale of its popularity shone through.

The renewals meant that the sitcom was crowned the longest-running show in America. That's quite an achievement.

And it seems like the gang are going from strength to strength.

I love that in Its Always Sunny the only character development is basically them getting worse as human beings
— Madison (@Madison)1529810344.0

Although, hilariously, this fan pointed out that the characters seem to be getting worse as people as time goes on. Ah well, makes for better entertainment, doesn't it?

Currently, fans are eagerly waiting for the fourteenth season to drop.

Production on the new season began in May. Avid fans will also be pleased to know that a fifteenth season of the sitcom is in the pipeline, so there's no way that the show is giving up its reigning title of longest-running anytime soon.

With the show soon set to mark its fourteenth season, as you can imagine, it's got its fair share of behind-the-scenes secrets and quirks.

And we've listed them all for you. How many of them do you know?

The whole thing is a dream.

Rob McElhenney, who plays Mac on the sitcom, and is also the creator, writer, producer, and director of the show literally dreamt up the concept of It's Always Sunny after having a nightmare about a man with cancer and his insensitive friends. And thus, the show was born.

The original plot was recycled.

Going all the way back to episode 4 of season 1, "Charlie Has Cancer," it turns out that it was originally shot for the pilot of the show, so follows the exact same storyline used in the original pilot episode.

Everyone but Danny Devito is married to another member of the cast.

It turns out that all of the cast are coupled up with each other, apart from Devito. Charlie Day is married to Mary Ellis, who plays The Waitress, Rob McElhenney and Kaitlin Olson who play Mac and Dee have tied the knot, along with Glenn Howerton who's married to Jill Latiano who briefly appeared in "The D.E.N.N.I.S. System" episode of the show.

Devito almost drowned during filming for the season eleven finale.

For the underwater sequence of the season 11 finale, Devito had to be weighed down as he was too buoyant, but when it was time to resurface, he needed assistance from safety divers. That was close.

No, that wasn't a fat suit, for season 7 of the sitcom, McElhenney deliberately put on fifty pounds; he ate a whopping five-thousand calories a day to pull it off.

Does the name Jordan Reid ring a bell?

Probably not. You'll not likely to remember her, but Reid helped to develop the show and originally played Dee.
She was also dating McElhenney at the time, but when they broke up, she was dropped from the show. Ouch.

Dee's original character was very different from the one that we ended up seeing.

The McPoyle family is based on a real-life family.

Okay, so this one is slightly terrifying. This inappropriately close family are based on Day and McElhenney's memories of two different families that they knew in their youth while growing up in Philadelphia.
Although you'll be relieved to hear that the real-life McPoyle's are not quite as psychotic as they are on the show. McElhenney reportedly just used the name and the fact that there were a lot of McPoyle family members for inspiration. The rest of the madness came from the creators.

The end credits have secret messages.

Ever wondered what the deal is with the credits? The hidden audio messages are Day, McElhenny, and Howerton speaking backwards, with a new message each season. Yes, really. For example, season 1's secret message is "You're stupid for playing this forward."

An on-screen romance between Mac and Dee will never happen.

Despite being husband and wife off-screen, Olson revealed that she and her husband's characters will never date as their characters are "too revolted" by each other.

Howerton didn't want his character's name to be associated with his, due to the road that Dennis would go down, with his increasingly sociopathic behavior and descent into darkness being deliberately cultivated since the first episode.

There was a Game of Thrones episode.

Believe it or not, Game of Thrones showrunners, David Benioff and D.B. Weiss, wrote the episode "Flowers for Charlie," wherein he is the lab rat for an experimental drug and briefly becomes super smart.

The show was almost called "Jerks."

The show was originally supposed to be about 3 actor friends in LA struggling to make it in the industry. Although they later decided to have it set in Philadelphia, where the characters own a dive bar.

The Green Man is real.

According to Glenn Howerton, Charlie’s beloved and slightly creepy green bodysuit was inspired by a real-life friend, who used to wear a similar suit to Eagle games.

Dee's injuries in season 4 were all Olson.

Though the actress had a stunt double on set, when Dee runs into a car headfirst, it's all Olson. Speaking to Yahoo! News, Olson said: "I think that's part of the acting. I don't want someone else to do it for me. So, yeah, I needed to see a chiropractor many times afterwards, but whatever, it worked out."

And now it's coming back.

If this recollection of all things It's Always Sunny has gotten you in the mood for some more, then you're in the right place, as we bring you good news. It's Always Sunny In Philadelphia is coming back in just over a month for a new season!

The hysterical cult comedy classic returns on January 19th with Season 14. And as everybody knows, January is the worst month EVER, so it's arguably the best time the show could ever drop!

The gang won't fill you with Christmas cheer.

But their dysfunctional behavior could well keep you going to the end of January and into the beautiful bliss of February when spring is just around the corner.

Streaming giant, Netflix, announced on Twitter, that Season 15 would be dropping on their channel so that's exactly where you want to be on January 19th.