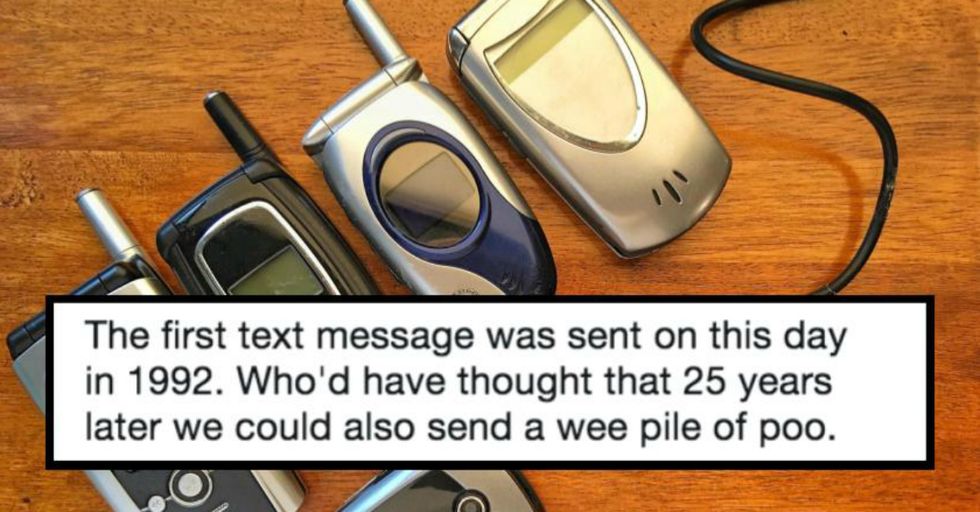 It sort of feels like texting has been around forever. It's hard to remember a time when there wasn't texting, along with a time when everyone owned a landline and you didn't have to dial area codes when calling someone. You know, the stone age.

But 25 years ago, the first-ever text message was sent. That's right — the first text message is old enough to rent a car! Can you believe it? Text messages grew up so fast!

It was sent through Vodafone, a British multinational telecommunications company. And funnily enough, it was sent via a computer.

The message, from a young engineer named Neil Papworth to Vodafone director at the time Richard Jarvis, was simple. All it said was "Merry Christmas."

It was in 1993 that Nokia introduced the messaging format to different handsets. However, it was kind of like Twitter back then: there was a 160-character limit.

It wasn't until six years later in 1999 that messages could be sent via different telecom networks.

Can you imagine having to restrict your texts to just 160 characters? It feels surely impossible now, since most of us do most of our communicating via text.

It's hard to remember a time when texting existed without emojis.

The first emojis were created in Japan, and it's impossible to imagine texting without them. There's even an entire movie about them, which is when you know something has really infiltrated our culture.

At the time, Papworth had no idea the impact that sending his simple "Merry Christmas" message would eventually have.

"In 1992, I had no idea just how popular texting would become, and that this would give rise to emojis and messaging apps used by millions," he told Gadgets 360. "I only recently told my children that I sent that first text. Looking back with hindsight, it’s clearer to see that the Christmas message I sent was a pivotal moment in mobile history." Imagine going to school and telling all your friends that your dad sent the first ever text message.

Texting has become so ingrained in our society that quite often it's the preferred method of communication.

It's not uncommon nowadays to text everyone from your friends and family to your boss and colleagues. Over the years, it's become a vital form of communication and perhaps the most convenient.

So just how often are people texting?

It's pretty mind-boggling. According to teckst, about 8.3 trillion people will send text messages this year. That's just in 365 days!

Over 6 billion text messages are sent each day in the United States.

That's ... a lot of text messages. Over 80 percent of American adults text. (We do wonder about the other 20 percent. Carrier pigeons?)

Text messaging is also the fastest way we consume information.

On average, it takes less than 5 seconds to read a text message. That's pretty impressive, since nowadays everyone is trying to figure out the fastest way to consume more content.

It also takes the average person 90 minutes to answer an email, but only 90 seconds to answer a text message.

So can we all just agree that texting is the way to go? Happy Birthday texting. We'd be lost without you.