It's Been One Year Since the Election, and People Are Sharing How Much They've Changed Using This Hilarious Meme | 22 Words 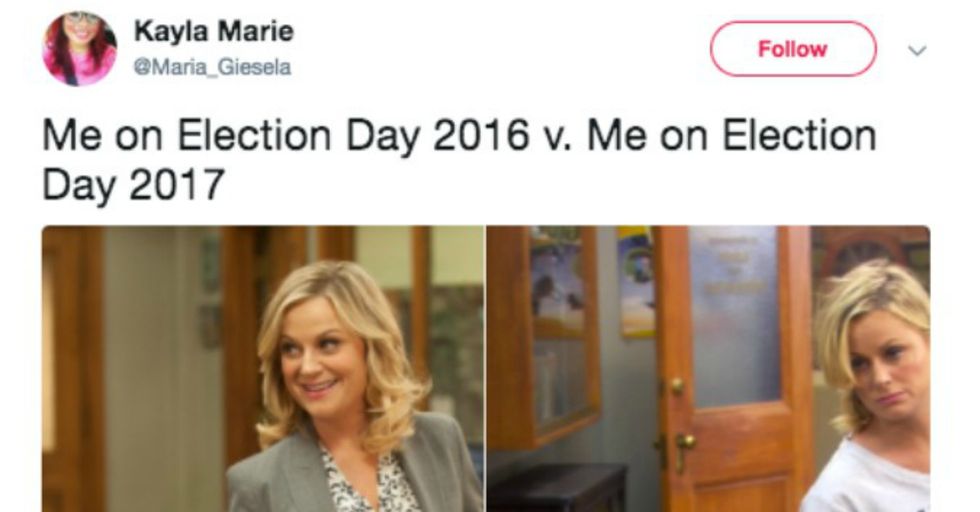 It's Been One Year Since the Election, and People Are Sharing How Much They've Changed Using This Hilarious Meme

You guys, we did it. We made it through an entire year since the last election day. And what year it's been. The election, the inauguration, the protests, Melania's shoes, hurricanes, paper towels, Harvey Weinstein — are we writing a new verse for "We Didn't Start the Fire" or what?

People all over the Internet are commenting on the fact that the last year has felt like the longest in literally forever — and they're doing it the way the Internet does things best: with memes!

People have started sharing photos that capture how they felt on last year's Election Day vs. how they're feeling this year.

And they're all so, so perfect. Like this one that shows a young and hopeful Hermione becoming the war-torn, world-weary warrior at the battle of Hogwarts. #Relatable.

Or this one showing Carrie pre- and post-pig blood shower.

This is way too accurate. To put it mildly, this year has been...messy, at best.

Remember the days before punching Nazis was a thing that happened?

You know, because we live in the 21st century now? But nope! Here we are. Punching Nazis in 2017.

This year, we're all just a bit more bedraggled.

It's been a hard year. Almost like one 365-day long Monday.

Some of us feel like we've transformed into super powerful heroes after living through the past year.

See Jabba the Hutt up there? Jabba's the Patriarchy. Basically. And Star Wars isn't the only movie people are comparing the last year to...

You know what we say to that hope now? "We'll never let go!" (Except we won't immediately let go like Rose did. What the heck, Rose?)

Last year, we smiled about things. Now, we're ready to kick some butt.

Remember when we all thought 2016 was the worst year ever? What were we even thinking?

And here's the thing: We still have nearly two full months left in 2017.

Are we gonna make it? Yes. But we might age a few more years in the process.