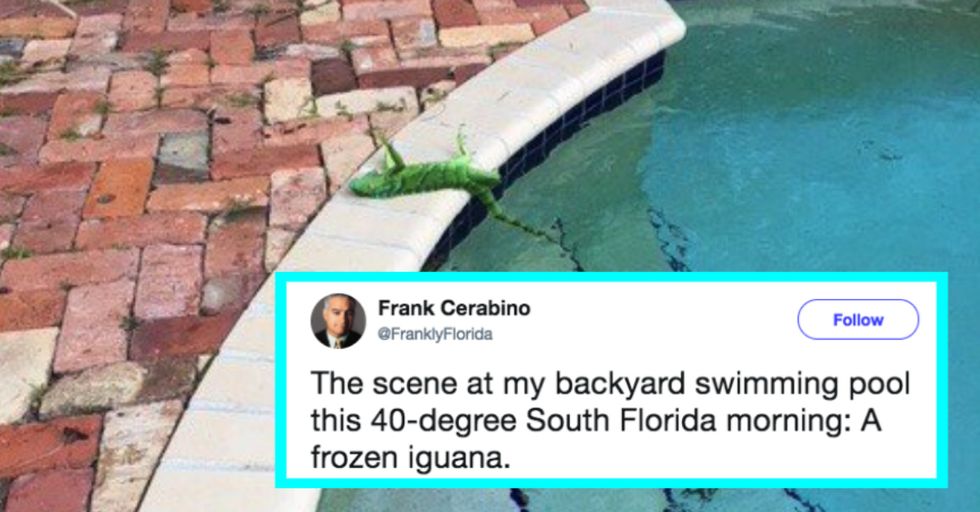 We're only a few days into 2018, and the apocalypse has already begun. Much of the country is currently experiencing temperatures that are way below normal for this time of year. Oh yeah, and the entire east coast is being slammed with a winter storm of such epic proportions it's actually called a "bomb cyclone." Yes, that it the official weather term for what's happening right now.

The Northeast especially has seen feet of snow and ice accompanied by swirling, violent winds — not so much a winter wonderland as a winter nightmare land.

Even Florida and other places in the south are seeing rare snowfall and record-low temperatures. The extreme cold is doing much more than surprising the human residents of these areas — it's shocking the whole ecosystem, so much so that iguanas have started freezing and falling out of the sky (well, out of the trees they hang out in). It's pretty sad and surprising, but it's also a little funny. (Don't worry, they are not dead. Just frozen.)

This bomb cyclone is the real deal.

It's basically like a hurricane, but with massive amounts of snow instead of rain, and it's affecting people up and down the entire east coast of the country. Tens of thousands of people are without electricity, blizzards have been canceling school left and right (yay!), and conditions are incredibly dangerous.

The winds are so strong that they're making even underground escapes from the cold, like NYC subway stops, full of snow.

Underground subway stations were no match for the bomb cyclone: "To see snow building up in some of the stations wa… https://t.co/aLve8alCWs
— amNewYork (@amNewYork)1515105240.0

"Are we shoveling subway stations as well? Real question," Brooklyn Councilman Justin Brannan tweeted. In more suburban or rural places, cars are literally frozen in place and feet of snow have piled up in people's driveways.

It's insane — people are literally up to their waists trying to trek through the snow.

Even as the east coast in being pounded with precipitation, life goes on, and people have had to try to find ways to maintain their daily routines even though in some cases, walking to the corner store or getting in the car is nearly impossible.

Sometimes we don't think about how weather like this affects the wildlife in the area, but animals are hit just as hard as humans by extreme winter storms.

Frozen sharks have literally been washing up on the shores of Massachusetts beaches. I think it's safe to say that that's not supposed to happen. And yet, Donald Trump continues to tweet about how global warming must be a hoax because it's cold out. That's not how it works.

One overlooked animal that's being mighty affected by the bomb cyclone is iguanas.

As you probably know, iguanas and other lizards prefer warm temperatures. That's probably why many iguanas choose to hang out in the trees of what is a reliably balmy state: Florida. But it's been cold in Florida lately, so cold that iguanas are freezing and falling out of trees. Now, I'm going to show you some pictures of these poor, frozen iguanas. Just know that they are not dead and that it is OK to laugh...

I named her Elsa because, you know, she's Frozen. Temperatures in Florida have dropped below 40 degrees, which is pretty unheard of in the Sunshine State.

And 40 degrees is cold enough that iguanas are completely immobilized and falling out of trees.

I know. This world is insane. Most likely, these iguanas are not dead, and they just need to warm up a bit.

This Twitter user advised moving these stiff lizards into the sun to give them a better chance of warming up quickly.

But Kristen Sommers, who works for the Florida Fish and Wildlife Conservation Commission, said it's better to leave them where they are since they might feel threatened and bite once they warm up a bit.

Iguanas are native to Central and South America, and they start to slow down when temperatures fall below 50 degrees Fahrenheit.

So when it hits the 30s, it is officially too cold for them to move at all. And they're not the only animal this happens to. The wildlife commission has been hard at work rescuing sea turtles that have frozen up and have been "found floating listlessly on the water."

As of right now, though, there is no rescue effort planned for the iguanas.

So this is it, folks. We're watching the end of the world happen in slow motion. These frozen iguanas are just like us — paralyzed because we've entered unknown territory. Afraid of what might happen next. And super super cold.