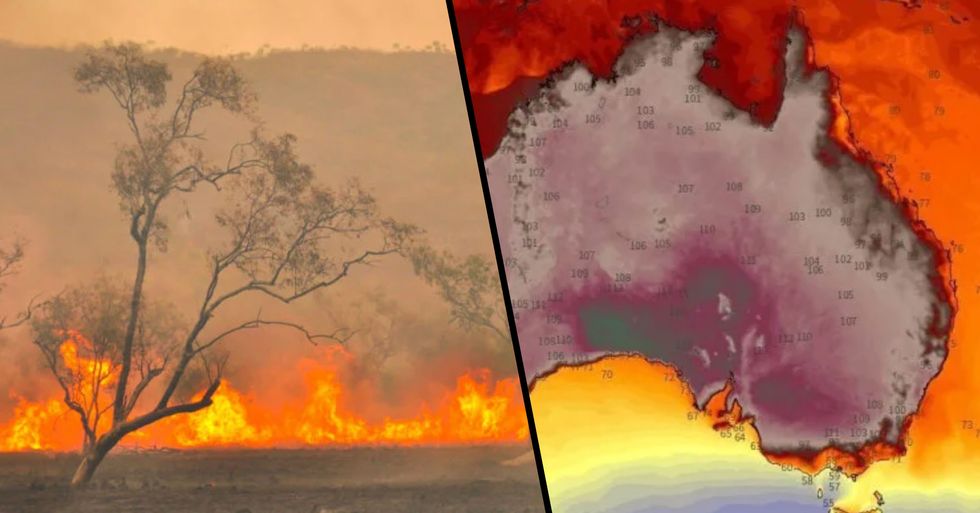 Bush fires have been rampaging through Australia for the last 2 months and they have caused complete and utter devastation.

Koala bears are nearly functionally extinct, and thousands of homes have been damaged or destroyed.

The heat hasn't cooled down, at all, and it is that high that the country has run out of colors to use on the heat map.

This state of Australia has truly taken a beating by bush fires, and it has been battling the heat for the last 2 months.

The last few months have had a devastating impact...

The BBC reported that close to fifty bush fires continued to burn in populated coastal and inland regions to the city's north. Authorities also said that 468 homes have so far been destroyed since blazes flared up on the 8th of November.

These include Vivian Chaplain, sixty-nine, Julie Fletcher, sixty-three, Barry Parsons, fifty-eight, and George Nole, whose age is unknown. 2 others were then confirmed to have died from the conditions, with the most recent being the burnt body of a fifty-eight-year-old man found in Willawarrin, November 13th.

As the forests and rural areas continued to burn...

It has been estimated that around 2,000 koala bears have died, with an approximate 75% of the fireground footprint said to have encroached on prime koala habitat.

One selfless woman along with an adorable koala named Lewis became an internet sensation when a video went viral...

Toni Doherty, a local to the New South Wales state, fearlessly ran into a bush fire at the aid of the helpless koala bear.

He was clearly very confused as to what is going on around him, and his vulnerability was very apparent.

She took off her t-shirt and used it to wrap up the frightened animal. She then rushes off to give the koala plenty of water.

Toni proceeded to take the scorched koala, to the nearby Port Macquarie Koala Hospital, a specialist facility currently treating a number of injured koalas.

His burns were continuing to get worse each day.

Sadly, the decision was made to have him put down.

The hospital announced the devastating news on Facebook this week.
"Today we made the decision to put Ellenborough Lewis to sleep.
"We placed him under general anesthesia this morning to assess his burns injuries and change the bandages."

Tragically, there was no way his burns would heal.

"We recently posted that 'burns injuries can get worse before they get better'. In Ellenborough Lewis's case, the burns did get worse, and unfortunately would not have gotten better."

This is just one example of the devastating effects of Australia's heat crisis...

And the bush fires are still burning as we speak.

And to make matters worse...

The country experienced it's hottest ever day this week, with an average temperature of 41.9C (105F) and highs of 50C in some areas.

The soaring temperatures have not helped with the consistently burning fires...

This has caused Australia to officially declare a 7-day state of emergency in New South Wales.

It isn't looking like it is going to cool down any time soon...

Meteorologist Diana Eadie said to Metro, "This hot air mass is so extensive, the preliminary figures show that yesterday was the hottest day on record in Australia, beating out the previous record from 2013 and this heat will only intensify."

Australia composed a heat map to demonstrate the heat crisis...

via: Bureau of Meteorology

But, as you can see from the map, they are actually running out of significant colors to demonstrate the soaring temperatures.

A health warning has also been issued...

The heat-wave conditions and smoke from the fires are expected to have a "large impact on people's health." We can only hope that the temperatures will eventually dwindle and that people will do their best to stay safe in these devastating conditions.