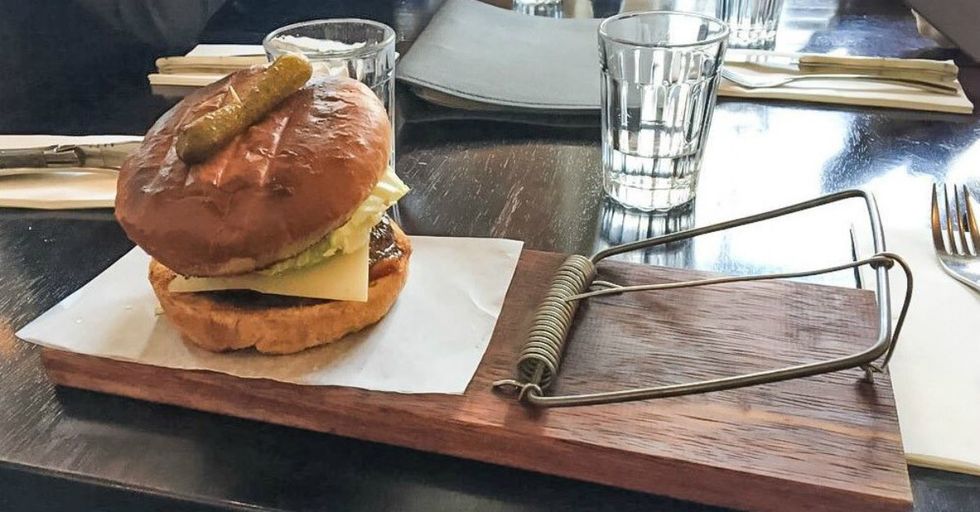 These Hipster Restaurants Refuse To Use Plates, And The Results Are Hilarious

If you're anything like me, you'd agree that going out to dinner is the ultimate way to "treat yo self." You get to dress up, trade in your pigsty apartment for a romantic and inviting ambiance, eat delicious food and leave the cooking and cleaning to the professionals. Eating out, to me, is sacred, so this recent hipster trend, where restaurants serve tiny amounts of food in bizarre and confounding ways just doesn't fly with me. Why use a plate when you could let your customers eat Beef Bourguignon out of a tiny dump truck, you may ask? Because it's stupid, that's why!

Feel free to peruse these plate-free examples of all that's wrong with the culinary world today. Warning: You may be left filled with rage and extreme hunger.

"Um, waiter? I just found a huge bone in my steak..." There's something so unsettling about eating meat off of what looks like a dinosaur bone. Although Fred Flintstone would feel right at home in this restaurant. Yabba Dabba Do! (Or don't.)

No, your eyes aren't deceiving you. That's a lovely trio of winter vegetables served on a pick. Like, the kind you use on hair. Let's just say I'd be searching extra hard for any stray strands in this meal.

There are just so many questions that come up when you look at this photo. Is this whole dish just two cherries (or maybe olives) on spoons? Is that tree wearing a sweater? Why is a tree involved at all? Also, I'm guessing this monstrosity cost at least $20 bucks.

Wow, look how organized that cheese board is! "I'm in the mood for something complex and savory, but that also reflects my on-the-go professional lifestyle."

When you order a Club Sandwich and it arrives on an actual miniature picnic bench. Mortifying. @WeWantPlates https://t.co/Aq6Z1NONu6
— Emily McCulloch (@Emily McCulloch)1541686180.0

When a grown adult gets their meal served on a tiny picnic table, something has gone horribly wrong. I don't think I'd be able to make direct eye contact with any of my dining companions while eating this thing.

This poor excuse for pasta

What could be more appetizing than wiggly pasta noodles crammed into a too-small clear container? Plus, the way the jar is shaped, there's no way you're getting any sauce to those poor naked noodles at the bottom. I think we all need to take a moment to appreciate the fact that most Spaghetti Bolognese is not served like this.

This example of animal endangerment

This prawn lollipop was served on top of a goldfish. In a blender. Please don't tell me this was some sort of DIY dipping sauce.

This meal should come with an entire roll of paper towels. Or with a complementary hazmat suit.

This strange use of Styrofoam

“Our environmentally-friendly tempura is made with sustainable seafood and vegetables, harvested in ways that cons… https://t.co/P03E5UAqiV
— We Want Plates 🍽 (@We Want Plates 🍽)1535564011.0

"You wanted that entree served with a side of confusion, right?" Doesn't this seem like more trouble than it's worth?

There are certain things you just don't do to a perfectly good pie. It deserves more than this sorry display. Excuse me while I take a minute to compose myself.

This woman has every right to be furious about this poor excuse for a breakfast. Although, wasn't she asking for it by ordering $18 avocado toast? Just putting that out there.

"Hey Stan, we're out of gravy boats." "Just find some old garbage to put it in. No one will notice."

The "Where's Waldo" of appetizers

I've been looking at this photo for the last 20 minutes and I can't find any trace of actual food. At this point, I'm convinced that the waitress brought out a withered house plant instead of the actual appetizer.

This piece of modern art

This meal would look right at home in a pretentious art exhibit where everyone's wearing turtlenecks and making comments about the "genius" artist who put a crumpled used Kleenex in a display box and called it "art."

I don't mean to be controversial when I make this statement, but food should never, ever be served on a sanitary napkin. Period.

What horrible crime did this innocent-looking Cheesecake do to deserve such a cruel and unusual punishment? Also, anything that makes it harder for me to access my dessert is an instant "NOPE" in my book.

Who doesn't look at a flip flop and think to themselves, "Man, I'd love to eat some food off that thing." Here's hoping the owner of this restaurant wasn't clearing out the Lost and Found box.

First of all, in what world would this be considered even close to enough ice cream? And secondly, why?

This tiny grocery cart...for some reason

When you order your coffee "to go," doesn't that mean that it's already portable? So why add the cutesy little shopping cart?

Not only is this yet another example of a ridiculously small portion, but they also managed to add insult to injury by guaranteeing their customers a literal injury. How much is that trip to the ER going to cost you on top of that $60 bill?

Imagine how fast you would cut someone out of your life if they served you salad in an ice cream cone. https://t.co/B472ldtlGS
— Molly Hodgdon (@Molly Hodgdon)1524264165.0

This disgraced Mac and Cheese

Macaroni and Cheese is a thing of beauty. ...unless you cram it into a clear glass mug. Then it basically resembles vomit.

The pretentiousness of this picture is off the charts. This weird display, known as "The Fruity Newton’s Cradle," was named after the obscure late-80s indie band of the same name. Apparently, that band had a big thing for meals that were really hard to eat.

I don't care how thoroughly you clean an antler, I still do not want to eat a meal off of an antler. And I'm sure the waiters who have to clean up after their customers aren't crazy about the whole antlers-as-plates thing, either.

You know what would make this fried ravioli bites even more delicious? If you squeezed the contents out of them for literally no reason.

Yep, strangely enough, this meat platter was served on a mirror. At least it gives the customer a moment to reflect on their poor life choices while eating.

Don't these pics just make you want to curl up in front of a roaring fire in your favorite slippers and munch on some bread? No, they do not. They make me wonder if that bread had a faint smell of rosemary and feet.

This picture looks like your crazy old neighbor finally snapped and strung their entire garden up on their clothesline instead of their clothes. Also, this explains why it took 20 minutes for your salad to show up.

This definition of laziness

The whole point of going out to eat is so that someone else does the work for you. At least you wouldn't feel obligated to leave a tip, right?

This lawsuit waiting to happen

Here's a tip for anyone dreaming of opening their own restaurant one day: Don't give the customers multiple opportunities to lose a limb (or at least a few digits) while dining. It's just not a smart business strategy.

This meal for Sk8er Boi's only

@WeWantPlates just been served my lunch in Greece on a miniature skateboard. It's a mineral spa by a lake full of e… https://t.co/fADPIbVklc
— Anne Frankenstein (@Anne Frankenstein)1496753628.0

I would maybe be into this idea if you got to keep the skateboard afterwards. But that's a pretty big maybe.

This literal "Surf and Turf"

I'm guessing the flashy presentation is just used to distract the customer from their pitifully small meal. And from the absurdly large bill at the end of it.

I think this place is confused about what serving something "in a cast iron skillet" means. This isn't it.

And finally, the ultimate insult

One customer finally had enough of the lake of plates and straight up asked for one. And this is what they received. At this point, it might just be safer to carry an emergency plate with you at all times.