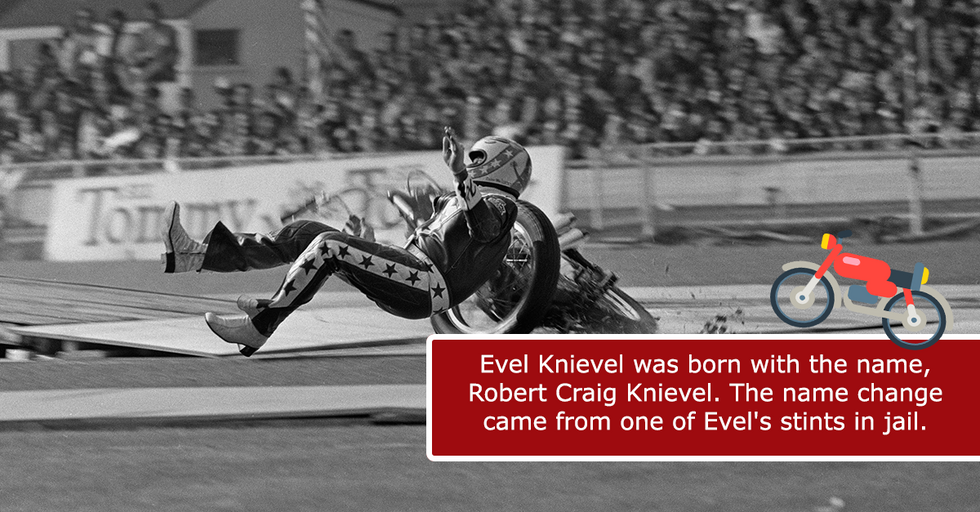 Evel Knievel (born Robert Craig Knievel) was known to the world as the iconic daredevil of his time. The professional stuntman was known for his risky, yet entertaining, theatrical stunts that shocked crowds and fair-goers across America. He is best known for his work on a motorcycle, having attempted over 75 motorcycle jumps, landing him into the AMA Motorcycle Hall of Fame.

Knievel seemed to have little fear — if any — using his stunts to jump over cars, animals, and even over a large canyon, all of which garnered him fame and praise across America.

If you were to do a quick Google search on the late '60s, early '70s icon, you'd read about his passion for thrilling jumps, or his iconic leather jumpsuits. But what's behind the man on the motorcycle? That's what we are going to delve into today, with some facts you might not have known about the celebrity stuntman.

Evel's first stunt jump was a ploy to sell motorcycles.

Talk about good advertising! The first public motorcycle jump that Evel did was to raise motorcycle sales for his Honda motorcycle dealership. The objective of the stunt was to jump his motorcycle bike overtop of a tank with cougars and rattlesnakes. And he succeeded, kind of. The motorcycle's tire hit the edge of the tank during his jump, causing the rattlesnakes to pour over and flip into the air in front of the crowd. Now, that's cool.

"Evel" is not his real name.

Evel Knievel was born with the name, Robert Craig Knievel. The name change came from one of Evel's stints in jail. He was nicknamed along with another inmate as "Evil Knievel and Awful Knofel." Later in his career, Knievel had changed the spelling of his first name, for fear that the word "Evil" had a bad reputation.

He wasn't exactly a role model.

Evel had a reputation of showboating in the media, and he wasn't very nice about it. He was known for his harsh nature, which landed him in jail more than once. On one occasion, Evel was placed in jail for battery. At the time of his release, he sent a limo to pick him up.

A failed stunt made Evel famous.

In 1968, Evel crashed after attempting a jump over the fountains in Caesar's Palace, in Las Vegas. The jump was (once again) a publicity stunt, this time supporting the hotel. Evel's jump was recorded for ABC's Wide World of Sports, leading Evel to fame upon the tape's release.

Evel retired as a painter.

Long after his career in stunt-work was over, Evel took up painting. He became an artist in the 1980s, creating and selling paintings of wildlife and western scenes. Share this with all your daredevil friends!