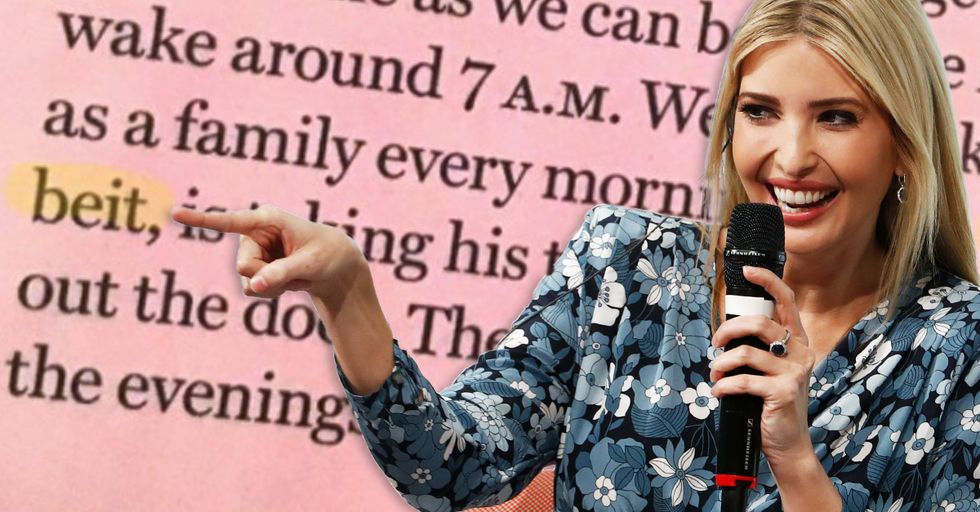 Ivanka Proves yet Again That Spelling Is Not Her Strong Suit After Misspelling a Tweet so Elementary, Even a Kid Could Spell It

Ivanka Trump has been called a lot of things in the course of this year – a fake feminist; a fake feminist who uses ghost writers (and researchers and fact-checkers) to author her book on fake feminism; a shameless beneficiary of nepotism and an insidious and complicit troll who is using the American government as a tool to further her and her family's interests.

Basically, people think Ivanka is a gem. But did you know she's a gem that can only barely spell?

She went to Georgetown University for undergrad, but transferred after two years to the Wharton school in the University of Pennsylvania where she graduated with a bachelors in economics.

Most people barely scrape through college, but Ivanka sailed through TWO Ivy League institutions and landed with an honor. That's a pretty nifty achievement, especially considering economics is one of those degrees that sounds close enough to pure mathematics people wince at the thought of it.

In fact, she's even considered by most people to be the smartest of her siblings.

[She] is the secret weapon of the entire Trump organization. She not only has tremendous business savvy, but she’s also street smart. There’s no doubt she exhibits the best skills of her father, has already developed an impressive personal brand, and besides is a very nice person.

The elder Trump has always considered Ivanka the smartest and most beautiful of all her siblings. In fact, "The only phone call Donald would always take was Ivanka," one Trump associate once said.

Father and daughter are very alike in many ways, especially one - they're not particularly good with words.

While Donald Trump may think he has the "best words," he tends to use the same ones over and over again, and has a very limited vocabulary. Ivanka may not suffer from a limited vocabulary, but she does however, struggle with the meaning of words.

In fact, at least once a month, a minor controversy erupts over Ivanka's incorrect use of one word or the other.

Take, for instance, one of Ivanka's first forays into the world of Twitter gaffes. In November of 2016, Ivanka tweeted "I cannot believe that Theodore is 8 months old today! Happy birthday little teddy bear!" It was a very nice tweet and all, except... that wasn't how birthdays worked, and Twitter was quick to let her know it.

There were her questionable uses of the words "relative" and "otherwise," and her ill-fated attempt to impress the masses with her use of the word "albeit" – there were even snarky comments on her misspelling of the word undeniably as "indeniably."

This week, Ivanka sashayed onto Twitter with another gaffe for the ages. This one, however, was so simple, even an elementary student could call her out on it.

Ivanka posted a picture of herself on Twitter wearing a red formal dress with her children peeking out from underneath it. She accompanied it with a simple caption. "Peak-a-boo!"

Cue the sound of a thousand faces slapping into palms.

As any elementary school student will tell you, "peak" refers to the highest height, while "peek" refers to a furtive glance. We didn't even have to go to the dictionary to find this definition, it's pretty standard.

Again, this is a pretty elementary school mistake and people weren't about to let it go.

"Peek" - a quick, furtive glance "Peak" - what your brothers did in nursery school https://t.co/VdGEWCRXV8

“Quick, kids, hide in here. Roy Moore is at the door." https://t.co/eowR5zmRWQ

Kremlin Barbie, it's "Peek." Like when your father PEEKED into the dressing rooms of underage pageant contestants. https://t.co/Wq00Vhb2A0

Adorable! Now where have you hidden your ethics and moral fibre?!

Ivanka also posted the tweet to Instagram, which just goes to show – you can lead the horse to social media, but you can't force it to use spellcheck.