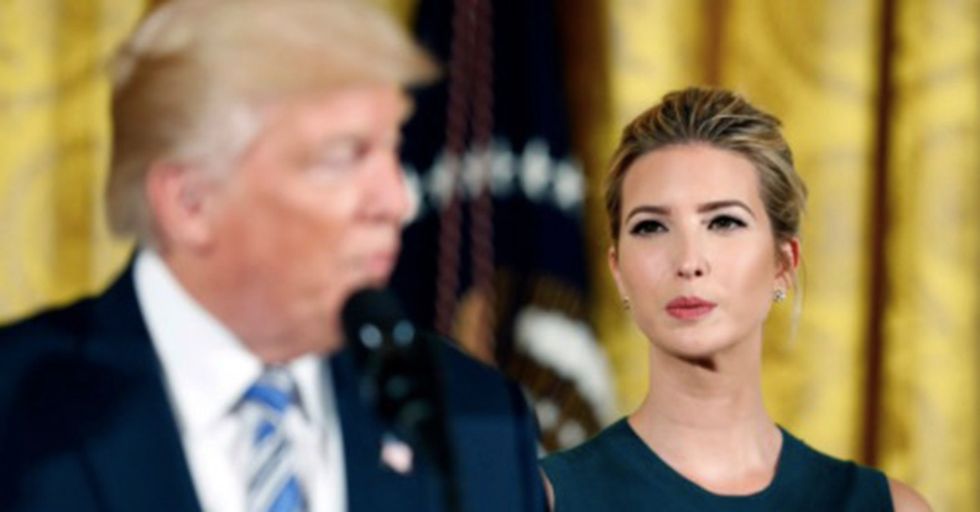 Much as Ivanka Trump has tried to distance (or appear to distance) herself from President Trump's policies, she's often dragged into the discussion of politics.

However, her latest move will likely even cause her supporters to wonder what she's really trying to do with her notoriety.

Ivanka Trump has been viewed by some as a beacon of moderation and idealism.

She's kept her distance from the White House as much as the daughter of the President and the wife of his advisor likely could.

She speaks more generally to social issues, knowing there's little room for blowback or criticism on stuff like this.

But she's championed a few causes from the sidelines and been public about them.

While it goes beyond what her dad's done, it's hardly revolutionary stuff she's saying.

But that's kind of the point.

She has been outspoken though for over a year on the issue of advancing women's rights.

It's unclear if she's been responsible for any real progress, but her advocacy does set a good example.

Well, it DID set a good example.

Her most recent act has caused many to believe that she's more loyal to her dad than she is the causes she's previously supported. You'll likely agree.

In short, she believes in fighting the wage gap, but doesn't want to get DATA on it. Just like her dad.

Here's what she said:

Ultimately, while I believe the intention was good and agree that pay transparency is important, the proposed policy would not yield the intended results. We look forward to continuing to work with [Equal Employment Opportunity Commission], [the Office of Management and Budget], Congress and all relevant stakeholders on robust policies aimed at eliminating the gender wage gap.

Wait, what? It's hard to argue that's not extremely hypocritical after saying stuff like this:

And people have noticed. BIG TIME.

When you make an enemy of the Anne Frank House, you're doing something wrong.

But they're hardly alone in their criticism.

Acclaimed actress Patricia Arquette is seething with disappointment and anger.

Ivanka pulled a total 180 when faced with the decision to stray from dad's policy.

Others still continue to plea with her to change her stance.

If we're not gathering data now, then when? People are fed up and getting less polite, as you'll see.

Some criticisms compared her to her father.

This is likely the exact type of criticism Ivanka was looking to avoid, but when you side with your father over your previously stated positions, and your gender as a whole, it's bound to happen.

This isn't the response she was hoping for, even with her not-so-clever explanation we showed earlier.

Many former supporters are voicing their disappointment.

They hoped that Ivanka would be an anchor for her father's more extreme tendencies, but she didn't deliver for them on this one.

Some people are straight-up calling her a "vampire." Yikes.

It's not the most rational response, but understandable given their outrage.

Yet, the takeaway is very real and very surprising.

Here's the headline that certainly cost her some support and fans. What do you think? Has Ivanka done right by her dad, or turned her back on American women?