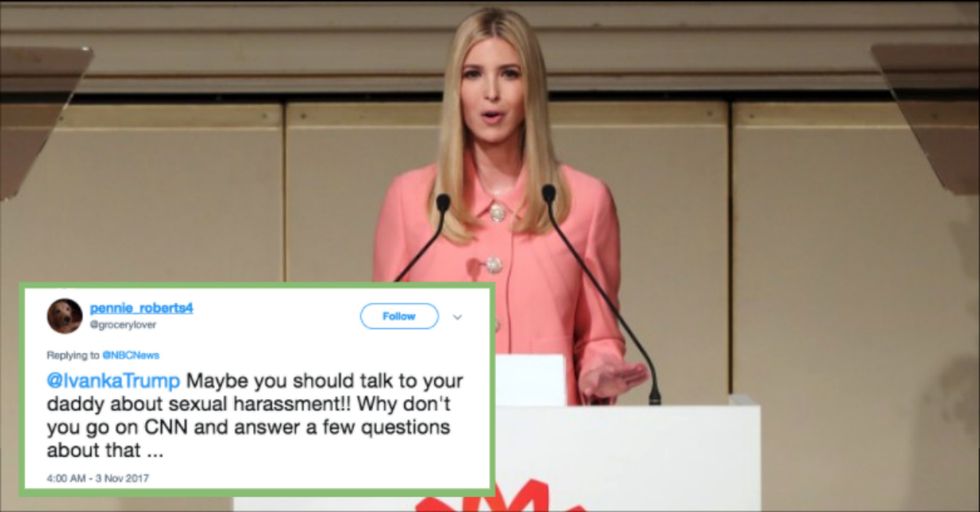 Unfortunately, it's also a real thing that really happened and are we sure we're not living in some kind of dystopian alternate reality?

Later this weekend, Donald Trump will also be arriving in Japan for a long trip throughout Asia. When Ivanka arrived, she was greeted by a special squad of female police officers and treated to a fancy dinner. The next day is when her work really began.

On Friday, Ivanka gave a speech all about sexual harassment in the workplace at the World Assembly of Women.

"All too often, our workplace culture fails to treat women with appropriate respect," Ivanka said to the reportedly half-full room of people. She then went on to say that sexual harassment within the workplace should "never be tolerated." And she's right!

There's just one thing, though.

Ivanka's own father (and her boss) is known for treating women poorly. In fact, he has been caught on tape bragging about sexually assaulting women by grabbing them by their genitals without their permission or consent.

Obviously, having conversations about treating women fairly in the workplace — and everywhere else — is super important. It's a topic that has become especially prevalent in light of the growing number of men in power who have been accused of sexually harassing and assaulting other people. But who's having those conversations with Donald Trump?

Maybe if she denounced her father's horrendous words and actions. Until then, it's basically just paying lip service to a hot news item. You know, besides the news that all her dad's buds are going to jail.