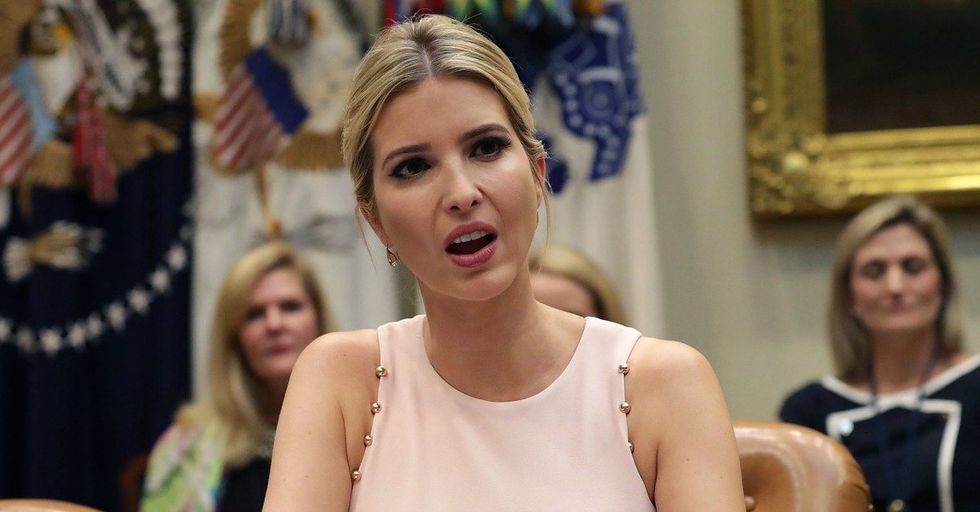 Eve Peyser is a politics writer for Vice, so she knows words. And she recently used her vast knowledge of words to show us exactly how bad Ivanka Trump is at knowing words. Hint: Ivanka Trump is very bad at knowing words. She's used many of them in the wrong way on many occasions. In addition to being a complicit cog in her father's quickly-disintegrating machine, she's just not very good at using the English language.

Luckily for us, Peyser has compiled Ivanka Trump's misused words into one nifty Twitter thread. They're all there, folks. And they're simply stunning.

First, Peyser posted a screenshot of what looks like an interview with Ivanka in Us Weekly.

First, she says she keeps her hours "on a relative basis," which means nothing. Then, she uses the word "albeit," which means "although," in the completely wrong context. Ivanka: 0 Dictionary: 2

Let's not forget when Ivanka unintentionally insulted her baby nephew with her use of the word "otherwise."

Chrissy Teigen pointed out that "otherwise" does not seem to mean what Ivanka thinks it means. Ivanka: 0 Dictionary: 3

If we take a quick stroll down memory lane, we'll come upon the moment in which we all learned that Ivanka doesn't know what "complicit" means.

In an interview with CBS News' Gayle King, Ivanka said the actual words, "If being complicit is wanting to, wanting to be a force for good and to make a positive impact then I'm complicit." But that's not what complicit means at all, Ivanka. It means nearly the opposite, in fact. It means you are involved in wrongdoing. Ivanka: 0 Dictionary: 4

"And I had had such easy pregnancies, that in some way the juxtaposition hit me even harder."

The juxtaposition of what? What two very different things did you put side by side? Because it wasn't both of your easy pregnancies, sister, because both of those were "easy." That's not what "juxtaposition" means. Ivanka: 0 Dictionary: 5

It's not even clear what she's trying to get at when she uses "overlay" here:

An "overlay" is literally a "cover," so Ivanka is pretty much using the phrase "cultural cover." It makes no sense. Ivanka: 0 Dictionary: 6 And it's not over yet. The best one is next...

Ivanka Trump doesn't know what a birthday is.

In her post about her son Theodore turning 8 months old, she wrote "happy birthday," which is completely and utterly baffling. A birthday is a birth day, as in, the day of your birth. Your birthday happens once a year on the day you were born, not 8 months into the year. Ivanka: 0 Dictionary: 7

In this snippet, Ivanka doesn't get a word wrong, per se, but she's needlessly repetitive.

Oh, a "competitive competition," eh? She might not have gotten the word exactly wrong, but you certainly don't get points for getting it extra right. In fact, the notion that she believed she had to qualify the competitive nature of competitions indicates that she doesn't know that competitiveness is implied in the word "competition." Therefore... Ivanka: 0 Dictionary: 8

As Peyser points out, Ivanka's been confused by words for at least several years now.

And it's not really a surprise considering her father has bungled his fair share of the English language. Here's the list so far of words that Ivanka can't seem to master: Relative Albeit Otherwise Complicit Juxtaposition Overlay Birthday Competition That's quite a list. Maybe someone should get Ivanka a dictionary for her birthday (the day she was born, but you know that).