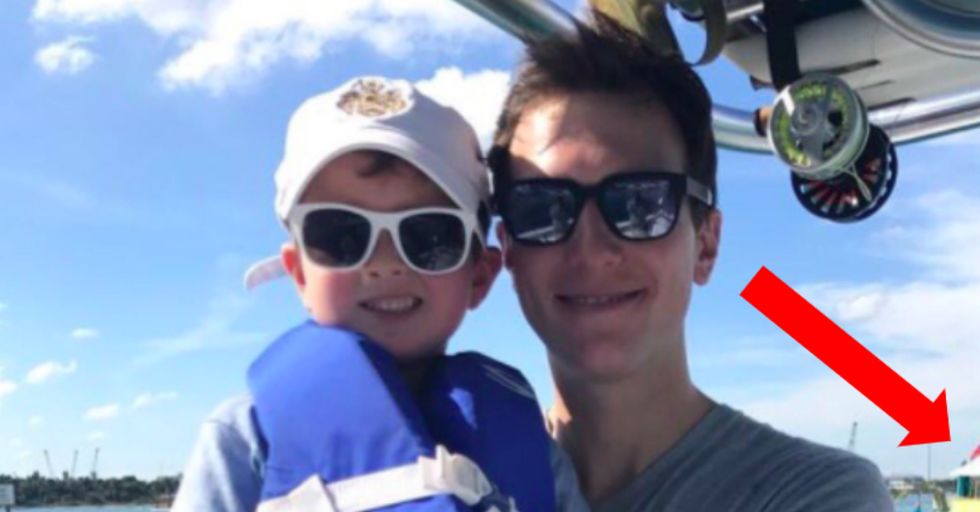 There's really only one big rule that everyone should follow when it comes to uploading pictures to social media: Always. Check. The Background. If you don't, it can lead to disaster.

That rule applies to everyone, but it's especially important for people in the public eye. When you're a celebrity or a politician (or a reality TV celebrity who has somehow become a politician), you really need to be hypervigilant about the photos you share. You may think you can just delete the problematic photos and go on your merry way, but when you're famous, those photos basically last forever and will pretty much haunt you forever.

Earlier this week, Ivanka Trump posted a few photos of her husband and son enjoying some time out on the water. Unfortunately for her, she broke the cardinal rule of social media posts, and the Internet went a little bonkers.

"To any kid, this fish is a trophy!" she writes, her words accompanied by some carefully selected emojis. The sentence is a tad awkward, but she appears to know what all the words mean, so we'll give it to her. The issue with Ivanka's post isn't with the caption. It's in the images themselves.

Again, most of them are perfectly innocuous.

Here's one of her husband Jared Kushner with their son and the trophy-level fish they caught together. Adorable!

Here's one of the two of them smiling on the boat. Also adorable!

Look, we may not be huge fans of the Trump family and all the treason they appear to be involved in, but even we can't deny that this is a nice picture of a cute kid hanging out with his dad.

Here's a picture of Jared Kushner helping his son catch that trophy of a fish:

Again, it's adorable. It's actually something of a relief to see a member of Trump's extended family acting like a normal person. Let's all enjoy this moment, shall we?

Finally, here's one final photo of Kushner and his son.

They're happy! Being out on the boat is great! Sunglasses, sun hats, and a life vest are all in use — safety is important! But wait a second. What's that in the background? Let's take a closer look...

Oh. It's a boat flying a Confederate flag.

Cooooooool. Cool cool cool. It's a symbol of racism, and it's in a photo that was uploaded by the daughter of the President of the United States of America. Not a great look, Ivanka!

Well, this is awkward.

OK, we do want to be perfectly clear: That boat of racist people is nearly 100 percent, for sure not Ivanka's boat. Her father may be racist (and homophobic, and Islamophobic, etc.), but we don't think Ivanka had any intention of uploading a picture of a Confederate flag to Twitter.

Remember what we said earlier about making sure to always check the background of pictures you upload to the Internet? Yeah. This is what happens when you don't do that. The Internet will find incriminating images, and it will call you out on them.

Plenty of people have stepped up in defense of Ivanka for uploading the picture.

@OccuCorporatism @IvankaTrump I despise the Trumps as much as the next decent human being, but I have to say that this is a bit of a reach.
— Cliff Smith (@Cliff Smith)1514376508.0

Hey, we're all human, and we've all made mistakes. Most of us are able to delete problematic tweets or Facebook statuses and continue our lives of virtual anonymity. Ivanka doesn't have that kind of liberty. It must be tough for her. After all, she's just trying to make herself appear more #relatable by sharing pictures of her kids.

While some are defending her, however, others are looking for hidden meanings in the photo.

No need to go all National Treasure on this photo, guys. Our advice to you is to just look at the picture and move on with your day. Our advice to Ivanka is to maybe take a closer look at pictures before you share them with millions of people online.