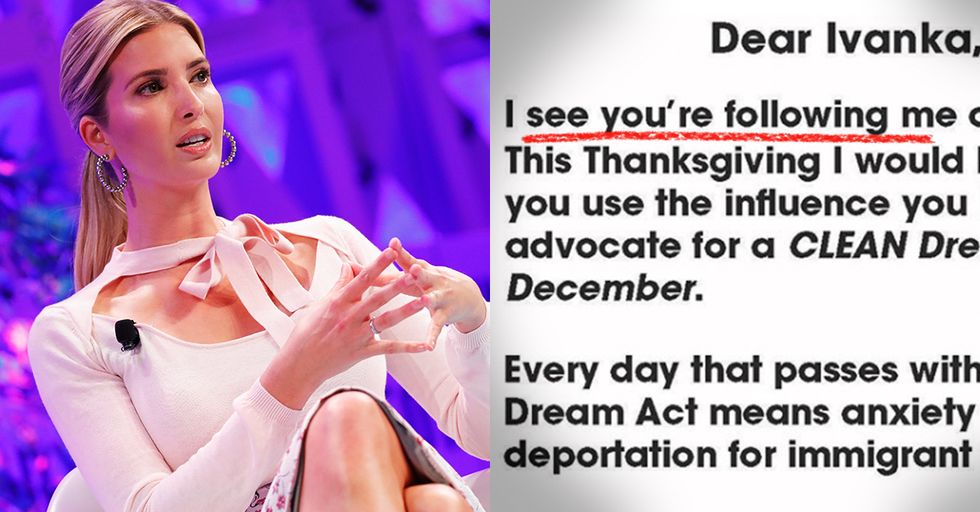 We all take notice when someone new follows us on social media, and chances are you would especially take notice if that person is kind of famous. Well, it turns out that Ivanka Trump follows a bunch of celebrities on Instagram, and over Thanksgiving, they all noticed.

A bunch of female celebrities who are followed on Instagram by Ivanka Trump decided to address their influential follower directly in a public message to her, and what they had to say was extremely powerful.

Unlike us, she's the daughter of the President of the United States and wields extraordinary power. It's an interesting position to be in, to say the least.

Over the Thanksgiving holiday, Ivanka posted a photo of her and her daughter on the White House lawn, reaching to pet a turkey.

It was a politically neutral "Happy Thanksgiving" message. She obviously didn't intend to ruffle any feathers (except for Drumstick the Turkey's, of course).

But some of the women Ivanka Trump follows on Twitter decided to take the opportunity to hold her accountable for her actions (or lack thereof).

The trend was started by Sophia Amoruso, the founder of Nasty Gal and author of #GirlBoss. She tagged Ivanka Trump in a starkly-written post that addressed her directly. The post asked Ivanka her to use her influence to support the CLEAN Dream Act by December of this year. That's quite a holiday wish.

In September, Donald Trump announced that he would end DACA, or the Dream Act, which legally protected the children of undocumented immigrants.

The CLEAN Dream Act would continue protections for those who are already covered by DACA. While Ivanka Trump is busy posting about turkeys, thousands of kids are losing the right to live in their own country.

Audrey Gelman, the founder of women's club The Wing, was the next to join in.

Think — Ivanka Trump follows all these women. She'll probably see these large print messages addressed directly to her, all over her feed. It's quite a statement.

Actor and model Cara Delevingne also posted the message to Ivanka and to her almost 41 million followers.

To call Ivanka out like that, for her complicity, is a really powerful move. Ivanka Trump has more influence over her father than she probably should, but that means she also has the power to be the bigger person and use that power to effect real and positive change.

She hasn't done so thus far, and it's extremely discouraging to see.

Ivanka Trump is a supposed champion of human rights, and yet she has remained silent as her father has slowly worked to strip away the rights of millions.

Wilde has led rallies against Trump before, along with fellow actor Mark Ruffalo. She's concerned for the future of this country, and while an Instagram post directed at Ivanka might seem like a minor thing, it's just part of a larger movement to get our voices heard.

Sophia Bush, an actor best known for her role on One Tree Hill, posted the message to Ivanka Trump as well.

She also included her own personal note. "Dear Ivanka," it read. "It's possible to be thankful and thoughtful. On a day meant for family and gratitude, think of all families. We implore you. #IStandWithDreamers #ALLfamilies #ThankfulandThoughtful #Resisterhood #Thanksgiving"

While Ivanka Trump hasn't responded to the messages, these strong women expressed their cause loud and clear.