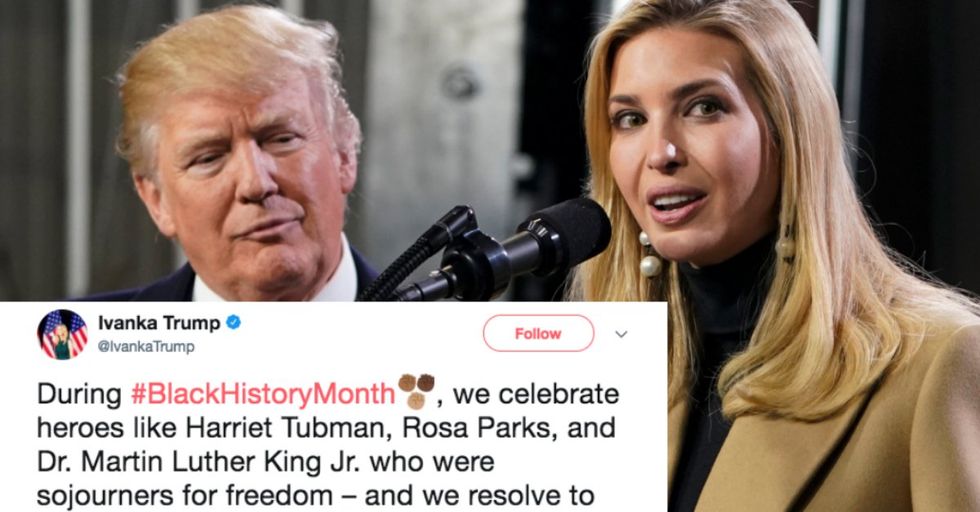 It's a wonder Ivanka Trump even says anything anymore. Girl needs to take her hands off the keyboard and step away from the computer because every time she tries to make a public statement, it does not go well.

Ivanka Trump is woefully clueless about how she comes across to the American people. Hint: It's bad.

Yesterday was February 1 and as such, the first day of Black History Month. Ivanka Trump decided to tweet this to "honor" the tradition:

Here, I will recreate my thought process as I read this tweet: Wow, this is nice. Hm, "sojourners"? Did she use that right? Yep, yep wait what no no no no noooooooooooooooo!!!!!

By the end of the tweet, Ivanka managed to negate and disrespect everything she'd written in the beginning of that same tweet.

There truly seems to be no end to what each member of the Trump family has the capacity to ruin. It literally never stops.

Not to mention, Ivanka's insistence that Black History Month is about "all Americans" (to reiterate: It is not.) reeks of the same false equivalency her father gave to white supremacists and those opposing them in Charlottesville.

Donald Trump insisted that there were "very fine people on both sides" of that rally. The Trump family is so desperate for approval that they do not care whether it comes from Nazis or not. That's how attention-seeking this family is. Ivanka Trump hardly wants to ruffle any feathers, so she insists that Black History Month is actually about white people too. She believes that specifically acknowledging the actions of black Americans is somehow "exclusionary" when it is, in fact, necessary, especially now that her father is in office.

Then, there's also the undeniable truth that Ivanka Trump and the rest of the Trump family don't actually care about "all Americans."

The people of Puerto Rico have spent months in devastating circumstances because Donald Trump barely sees them as people worthy of aid, let alone fellow Americans. As others continue to point out, there are so many reasons Ivanka Trump's tweet is problematic...

Not the least of which is that Donald Trump has proven that he's racist over and over again.

And Ivanka Trump has done absolutely nothing to condemn her father's actions and comments. It's way too late for Ivanka to convincingly pretend she cares about people who aren't herself.
Yeah, Ivanka Trump is complicit. But it's beyond that at this point. Her Black History Month tweet is so insulting because of how blatantly it tries to perpetuate the lie that she cares. Ivanka Trump is much more of an active accomplice to Donald Trump's terror than a tacit follower.

Donald Trump has proven that he's racist time and again.

Just recently, he decided to attack Jay-Z for his harsh words about him during a CNN interview, and yet he hasn't said a word about Eminem, who's been blasting Trump for months. The difference? Eminem is white.

For decades, Trump's racism has been well-documented. Even in the first year of his presidency, he's already specifically attacked a whole list of black Americans. He's also referred to African nations and Haiti as "sh*tholes." Ivanka Trump hasn't ever criticized her father for his behavior, and now she's out here stripping the meaning out of Black History Month.

What do I have to say to that?