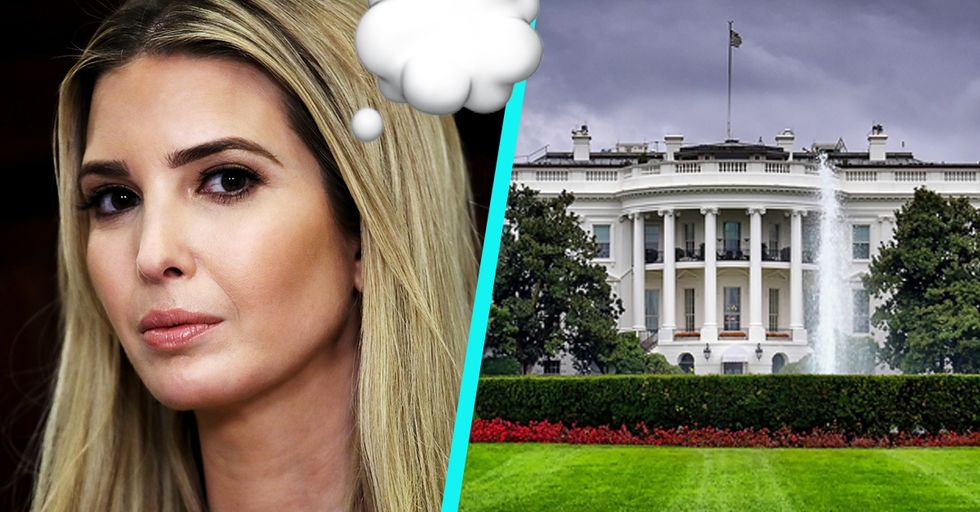 With the release of the new Trump tell-all book Fire and Fury: Inside the Trump White House comes some pretty fascinating revelations about not only Donald Trump but the people who surround them. And one of those revelations is about Donald Trump's favorite daughter (we don't think Tiffany would disagree), Ivanka Trump.

Apparently, Ivanka Trump has aspirations to be the first female president of the United States, which means she's either completely sheltered from reality or beyond clueless about what she and her father are currently doing to the Trump name (ahem, ruining it).

Michael Wolff's explosive exposé has already revealed some of the most bonkers behind-the-scenes details about Trump's campaign, the presidency, and about the man himself.

But one of the most laughable revelations was actually about Trump's daughter, Ivanka, who has positioned herself as Trump's right-hand woman in the White House.

She, apparently, has presidential aspirations of her own, and made a deal with her husband (and another of Trump's advisors), Jared Kushner. Apparently, the couple hoped that daddy's presidency would "catapult them into a heretofore unimagined big time." They accepted positions in the White House as part of a deal: "If sometime in the future the opportunity arose, she'd be the one to run for president. The first woman president, Ivanka entertained, would not be Hillary Clinton; it would be Ivanka Trump."

Could you imagine thinking that Donald Trump was doing such good for the country that you would be next in line? There are multitudinous reasons Ivanka Trump should not be president, starting with the fact that she posted a photo on her Twitter with a Confederate flag in the background:

This woman is unfit for the presidency. Like father, like daughter, I guess. Isn't it simply incredible that she would think, after the historic trouble her father has already caused in his first year, that she still has a shot at the Oval Office? Talk about delusional.

After all, she's criticized for pretty much every single thing she does, even for sharing her New Year's resolution:

Some hardworking Americans don't have the luxury to find more time to sleep — they're too busy trying to keep food on the table while she sits idly by and lets her father work to systematically destroy their livelihoods.
It's absolutely bonkers that she thinks of herself as a likable figure. We got news for ya, Ivanka. We're not remotely done with the list of reasons why you shouldn't even be able to consider yourself for the presidency...

Not the least of which is this hideous Thanksgiving centerpiece she shared on Facebook like it was normal.

OK, maybe this seems minor, but it's just another example of how out-of-touch with reality she is. That thing is like a birds' nest for a nasty zombie ghost bird.

There's also that small little thing about how Ivanka Trump doesn't know how to speak and uses very simple words wrong all the time.

Again, it might seem minor, her inattentiveness with language is just indicative of her immense privilege (she doesn't have to get words right — she's already rich!).
Words are important, as we've learned over and over again from Donald Trump's tweets, and Ivanka Trump doesn't know that. She cannot be president.

Ivanka Trump claims to be a champion of women's rights, but she abandoned her so-called platform to appease her father the first chance she got. She has no core values and beliefs other than lifting herself up.
Ivanka Trump cannot be president because she is an insidious, complicit presence in the White House. Also, her dad is messing literally everything up as I type. I don't think Ivanka Trump has any grasp of what's currently happening to the Trump name. What a world we live in.