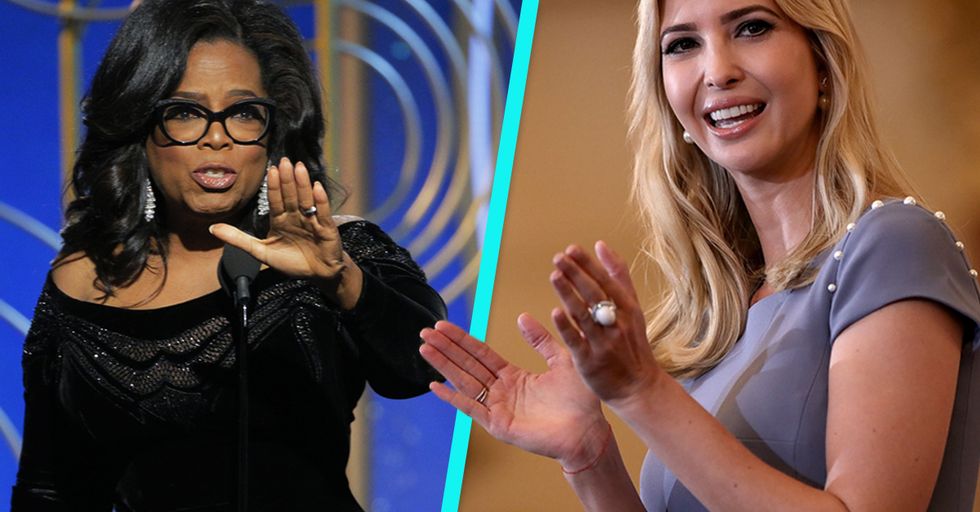 There's a tectonic shift taking place when it comes to power and gender dynamics today, and it's long overdue. The downfall of Harvey Weinstein instigated a movement — women are uniting and fighting to topple the destructive systems that have kept them oppressed and silent for so long.

It's a beautiful thing to watch. Women in Hollywood, ostensibly some of the most influential women in the world, have banded together to lift up and defend women who aren't as privileged as they are. Time's Up is an exemplary instance of powerful women using their power for good.

Ivanka Trump is a clear example of a powerful woman wasting the immense privilege and potential she's been handed. When she tweeted her support of Oprah's incredible Golden Globes speech, my heart caught in my throat. Ivanka Trump doesn't get to say "Time's up." Ivanka Trump has repeatedly failed millions of women who really could have used her help. Ivanka Trump is not on our side and never will be.

Oprah's speech at the Golden Globes was moving and fierce and inspiring and critical and everything it should have been.

Oprah, a powerful woman, used her power to acknowledge those less fortunate than her, to magnify the stories of women who don't get to speak on stage at the Golden Globes, and to lend her support to the movement at hand. It was such a fantastic speech that many called for her to run for president. Probably not a good idea, but that doesn't take away from the importance of her speech.

A full day after the Golden Globes, Ivanka decided to tweet out her support for Oprah's "empowering and inspiring speech."

"Let's all come together, women and men, and say #TIMESUP! #United" Ivanka dared to write. "Let's." Like she and I are somehow one, or even in any way on the same page. "Let's." Like she plans on actually taking action.
Come ON. Obviously, I wasn't the only one to pick up on the irony of Ivanka Trump attempting to spread the message of Time's Up.

It's lost on Ivanka that she is exactly the type of person Oprah was speaking against. Ivanka Trump is not one of the women Oprah spoke to in her speech — Ivanka Trump is a danger to them.

And Ivanka's inability and/or unwillingness to recognize what she represents through her actions and inactions is indicative of the extreme privilege with which she walks through life.

Ivanka saying "Time's Up" doesn't just tell you something about her intelligence (or lack thereof); it tells you wh… https://t.co/23z6vKbpnX
— Elizabeth Spiers (@Elizabeth Spiers)1515469059.0

Ivanka Trump may be a woman, but that doesn't grant her immediate access to the Time's Up movement, as she seems to think. In fact, she is for many reasons the embodiment of the movement's enemy...

It may seem obvious at this point, but the Trump family — Ivanka included — doesn't have the best interests of the American people at heart.

Oprah said that though the press is "under siege these days," (hmm, wonder by whom?) "it's the insatiable dedication to uncovering the absolute truth that keeps us from turning a blind eye to corruption and to injustice. To tyrants and victims, and secrets and lies." That corruption? Those injustices? The secrets and lies? She's talking about Donald Trump and his family, and Ivanka is no small part of that.

She has occasionally "spoken out" against anti-semites or against sexual predators, but her words are always empty.

What Ivanka hasn't seemed to learn is that words are not enough. In fact, if you don't follow them up with action, you are as bad — maybe worse — than the people who are simply able to state the hate that they feel.

This is a joke, but it's also scarily close to the truth:

If you haven't seen Get Out, earmuffs! Because there are about to be spoilers... Rose is evil. She isn't even just a complicit player in her family's disgusting scheme; she is an active participant. And psst, here's the thing: So is Ivanka.

Alyssa Milano craftily brought up the essential problem with Ivanka's support of Oprah's speech when she suggested she donate to the cause:

@IvankaTrump @Oprah Great! You can make a lofty donation to the Time's Up Legal Defense Fund that is available to s… https://t.co/OsxpPGwD03
— Alyssa Milano (@Alyssa Milano)1515467758.0

Ivanka never planned to actually become active in the Time's Up movement. She doesn't want to donate or actually fight for women because that won't necessarily help her get ahead. She just wants brownie points for being a woman who is semi-sort-of aware of the issues of today that her own father is so responsible for.

And we can say this because it's been proven time and again.

"Maybe she really means it this time!" you might say. But to believe that would be foolish. Ivanka Trump has repeatedly abandoned her so-called causes to further her political career or refrain from ruffling daddy's feathers...
It's no secret that Ivanka could have a significant influence on her father. A friend of Ivanka's told Us Weekly that Ivanka is the person Donald Trump listens to "more than anyone." And Donald Trump doesn't listen to anyone. This makes Ivanka Trump possibly the most powerful person in the world, and yet, she's only using her power to persuade the unpersuadable man only to advance her own career.

Ivanka Trump didn't learn to change her ways when she received intense backlash for her sexual harassment speech in Japan.

Yes, that's right: Ivanka talked about sexual harassment in the workplace at the World Assembly of Women. Needless to say, it did not go well.
That's probably because Donald Trump is a sexual predator. Her own father has been accused of sexual assault and harassment by 19 women. While it's not OK to blame a woman for the actions of a man, it is OK to criticize her for speaking up against sexual harassment in the workplace yet not speak out against the actions of her father.

In case you need more proof, there was that time she supported ending a policy that worked to close the gender pay gap.

This was mere months after she tweeted her support for Equal Pay Day. Ivanka Trump is a hypocrite of the highest order.

She might not know what complicit means, but that's OK because that doesn't encompass everything she is. She isn't merely complicit, she is an active suppressant of the very issues that Time's Up seeks to explore, and that is why she doesn't deserve a voice in the conversation. The very spirit of Time's Up — financially supporting those less fortunate, forming a united front against sexual predators and for women's rights — is exactly the opposite of what Ivanka Trump has demonstrated she stands for. She doesn't get to say, "Time's up."