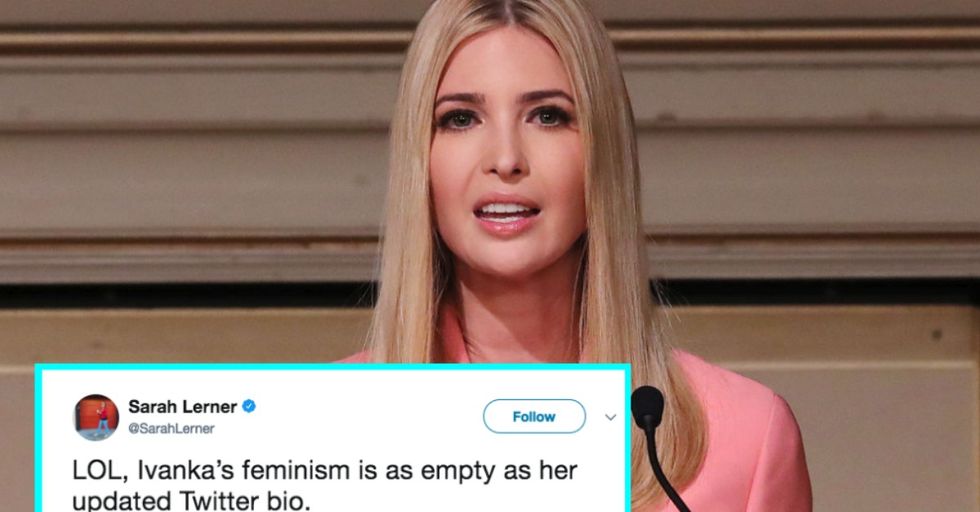 Ivanka has to know by now that every little move she makes is going to be picked apart by Internet vultures. She just has to, right?

She knows her entire existence is under a microscope, and yet she continues to make some really boneheaded mistakes, ones that seem to reveal her true character. I guess you can only lie to the American public for so long before your true colors bleed everywhere, and that's the lesson the eldest Trump child is currently learning.

Ivanka decided to change her Twitter bio, and literally no one was having it.

Ivanka Trump has tried to claim that she's an advocate for women before.

But it's hard to maintain that position when one is so transparently a ladder-climber devoid of any real values or beliefs. Ivanka Trump had no problem tweeting about the importance of #EqualPayDay for all women and then, months later, supporting her father's proposal to end the measures that would ensure pay equity.

Moves like this are why Ivanka Trump faces so much backlash.

You simply cannot expect for your speech about the importance of ending sexual harassment in the workplace to go over well when your father is a confirmed sexual predator and you do nothing to denounce his actions. It doesn't work like that.

This is why, Ivanka, we weren't on board with your praise of Oprah's speech at the Golden Globes.

Time's Up and #MeToo are about ending your father and others like him. They are about confronting the problems about which you stay silent and complicit on a daily basis. You don't get a seat at the table just because you are a woman.

Wife, mother, sister, daughter. Entrepreneur & advocate for the education & empowerment of women & girls. This is my personal page. Views expressed are my own.

And here's her new bio:

It starts out pretty much the same, but see if you can't spot where it diverges with her old one: Wife, mother, sister, daughter. Advisor to POTUS on job creation + economic empowerment, workforce development & entrepreneurship. Personal Pg. Views are my own.

Journalist Stephanie Ruhle was one of the first to point out what had changed in Ivanka's bio:

Guess the education and empowerment of women and girls is no longer a bio-worthy priority of Ivanka Trump. And she changed it on or around the day of the Women's March! What nerve.

Some were just kind of relieved that she's no longer pretending to be what she isn't.

The truth is Ivanka Trump has never been the advocate she imagined she was. It's better this way. Now she's not a liar. She's just a bad person.

It'll be interesting to see whether Ivanka continues to try to claim she's a feminist and tweets and speaks about women's issues. At this point, she can't really open her mouth without getting barraged by criticism (which is how it should be), so maybe she'll just sort of give up and fade away.

One can only hope.

She does. She does support her dad. Because she's as power-hungry as he is. She has no core value system or desire to do good. What she wants is to be the first female president of the United States.

Now that we know for certain, by her own actions, that Ivanka Trump doesn't care about women or bettering this nation, can we stop putting her on a pedestal? Stop saying, "Oh, but she has a successful business and wrote a book about being a working woman." Ivanka Trump is Donald, only younger and with better hair.