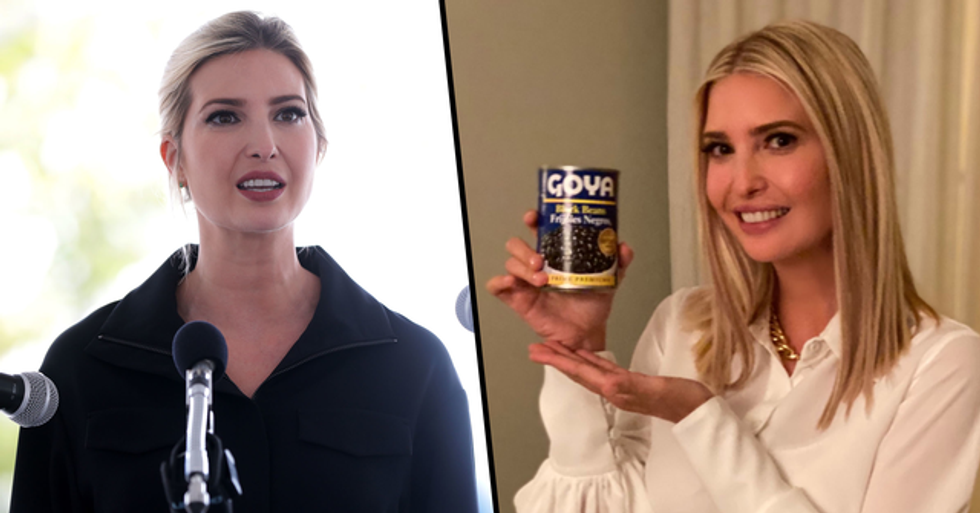 Ivanka Trump has stirred up a whole lot of controversy with her recent Tweet about the recently boycotted Goya Beans brand...

For those of you who aren't aware, this is Ivanka Trump.

President Donald Trump's eldest daughter and, more importantly, his Senior Advisor, Ivanka is very rarely out of the headlines these days.

But this week, Ivanka has stirred up quite the controversy...

And it is all surrounding the Goya Beans brand.

The thirty-seven-year-old is known best for her constant attachment to her father...

Wherever the president goes, Ivanka follows.

The businesswoman has had a complex career...

From model to reality TV star, to real estate mogul and author, there isn't much that Ivanka hasn't attempted to conquer.

So, of course, many have questioned why Ivanka is able to mingle with world leaders at important political events.

Considering her lack of political experience, it is somewhat eyebrow-raising for her to be in the role she is in.

For most, it takes years of studying, hard work, and sacrifice to get to where Ivanka is today...

And for women, most of the time it is virtually impossible. But I suppose life is a little easier when your father is the President of the United States, right?

Admittedly, Ivanka has risen to the role spectacularly...

And she focuses most of her time and expertise on improving the rights of America's women... Despite her father's blatantly anti-woman agenda.

But this doesn't mean she has been without her hiccups.

Who remembers when she tried - and failed - to hold a meaningful conversation with world leaders at the G2 summit in Osaka, Japan?

Last year, Ivanka and her father both attended the summit along with prominent leaders from all around the world...

It was a chance for them all to discuss economic issues and recognize how the countries contribute to the global markets.

But, according to the internet, the summit has now become a "take your kids to work" event.

A lot of people, including Whoopi Goldberg, criticized Ivanka for sitting in for her father at the G20 summit meeting, after claims that she "tries to stay out of politics." She gave a speech advocating for equal pay for women, telling the audience that the world economy would get a boost of up to twenty-eight trillion dollars by 2025 if women were on an equal economic level.

And others noted that she is "not qualified" to be a stand-in.

Even Alexandria Ocasio-Cortez, a Congresswoman from New York, had her say expressing that "being someone’s daughter actually isn’t a career qualification."

But then, that video was released.

In footage released by the Élysée Palace - France's equivalent to the White House - Ivanka can be seen desperately attempted to hold a serious, and political conversation with prominent world leaders, such as French President, Emmanuel Macron, Canadian prime minister Justin Trudeau, and British prime minister Theresa May.

She could be seen using elaborate hand gestures as she spoke in the direction of Theresa May...

But the leaders seemed overwhelmingly disinterested in what she had to say.

The video was shared by BBC journalist, Parham Ghobadi, and has since been viewed millions of times...

And it is a painfully awkward watch, no matter how many times you see it.

Of course, Ivanka was mercilessly roasted in the aftermath of the video...

@ParhamGhobadi #IvankaTrump brings nothing to this conversation. She’s embarrassing herself with no knowledge of th… https://t.co/sgF7RbJVTo
— Jules Morgan 🇺🇸 (@Jules Morgan 🇺🇸)1561870191.0

And, even a year on, we are still cringing at the memory of her desperate attempt at forcing her way into a conversation that was, simply put, way out of her depth.

But now, Ivanka has made yet another blunder...

And this time, it is all surrounding her tasteless Tweet about Goya Foods.

Just for a bit of context...

Ivanka's post comes just days after Goya's CEO, Robert Unanue, was criticized for praising President Trump during an event last week at the White House. "We're all truly blessed at the same time to have a leader like President Trump, who is a builder," Unanue had said.

People are angry, mainly because President Trump's policies haven't always supported Latinx Americans, as NBC News pointed out. His policies have separated parents from their children at the Mexican border and he's also threatened to deport so-called Dreamers - undocumented immigrants who arrived in the U.S. as children.

Goya Foods is the largest Hispanic-owned food company in the U.S...

So their CEO praising President Trump so warmly has sparked an understandable wave of anger.

So, coming back to Ivanka's controversy, yesterday, she tweeted this...

A photo of herself showing off a can of Goya Beans, alongside the caption: "If it’s Goya, it has to be good. Si es Goya, tiene que ser bueno."

Many people believe that this is a blatant, yet tasteless, advertising ploy to gain Latino voters...

It's almost like she's unaware half the country is currently boycotting the brand, isn't it?

Many brought up her father's problematic past with the Hispanic community...

Doesn’t @IvankaTrump know that @GoyaFoods is already in enough trouble without having the daughter of the man who c… https://t.co/onP2kLH85a
— Chris Burchill (@Chris Burchill)1594781930.0

One Twitter user mused: "Doesn’t @IvankaTrump know that @GoyaFoods is already in enough trouble without having the daughter of the man who called Hispanics rapists doing a promo for them?"

And others questioned the ethics of Ivanka endorsing Goya products by using the company's slogan in her tweet and holding up a can of black beans.

"White House advisor, Ivanka Trump promoting Goya seems like it could raise potential ethics issues since executive branch employees other than the president are prohibited from using public office 'for the endorsement of any product, service or enterprise.'"

Meanwhile, others used their photoshop skills to get their point across.

This picture really says it all, doesn't it?

Ivanka is yet to respond to the backlash...

And her controversial photo remains firmly on her Twitter feed. For more on the Trump family, keep scrolling to see Melania Trump's questionable 4th July dress...