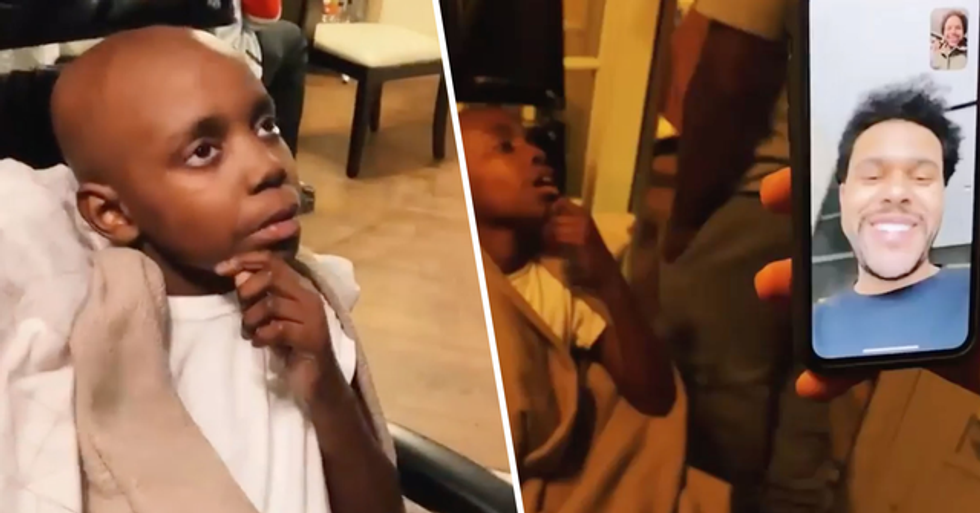 J. Cole, The Weeknd, and Drake Facetimed With 11-Year-Old Boy Before He Died of Cancer

Footage from his Facetime calls have now been posted online, where they have been quick to go viral.

Keep scrolling for the full story, and to watch the heartbreaking moments for yourself...

The young boy, from Hampton, Virginia, finally lost his long and grueling battle with cancer. He was only eleven-years-old.

The Williams family's world was torn apart when a tumor was discovered on Elijah's kidney back in 2017.

And, after various tests and grueling procedures, their worst fears were confirmed - Their eldest son had cancer.

Sadly, we are a long way off from finding an official cure for cancer...

The current treatment for the disease is grueling.

The most common treatment, chemotherapy, acts as a "poison" and kills off the abnormal cells. But, as a result, it can kill normal cells, too, making patients incredibly ill and often resulting in hair loss, weight loss, and general sickness.

So, out of those diagnosed with the devastating illness...

And, as a result of this high statistic, many families go through a lot of effort to make their last few months as comfortable and as special as possible.

Towards the end of his life, Elijah's family wanted to do something truly special...

And intended to show him just how loved he truly was.

Elijah's dream was to, one day, meet his 3 favorite musicians.

The hip hop and R&B icons, J. Cole, The Weeknd, and Drake.

And, luckily for the young music fan...

His cousin, Michael Watson II works in the music industry and had just the right contacts to make Elijah's dream a reality.

Though the stars weren't able to physically meet Elijah in person...

All 3 of them were able to give him an unforgettable phonecall via Facetime.

Each star took the time to individually Facetime Elijah...

And The Weeknd could be heard telling the youngster that he was "so honored to be one of his favorite artists."

J. Cole also made an appearance...

Where he told Elijah, "It's a pleasure to meet you man, I love you."

Meeting his idols truly lifted Elijah's spirits during the difficult last days of his life.

And Watson took to Instagram to thank those who helped make the FaceTime sessions happen in such a short space of time while reminding people to keep those they love close.

The Williams family will remember these moments forever.

Watson wrote: "Incredibly grateful for these 3 super-humans being so caring for my family during this time. We’ll hold onto these moments forever." You can watch a montage of the Facetime calls above.

"I just want to say a huge Thank you to @realcoleworld @theweeknd @champagnepapi & @joeylogano for showing my baby some love these last difficult days of his life. I truly appreciate you all."

For more on making the dreams of young children come true, keep scrolling to read about the youngster who was allowed to join the police force for a day...