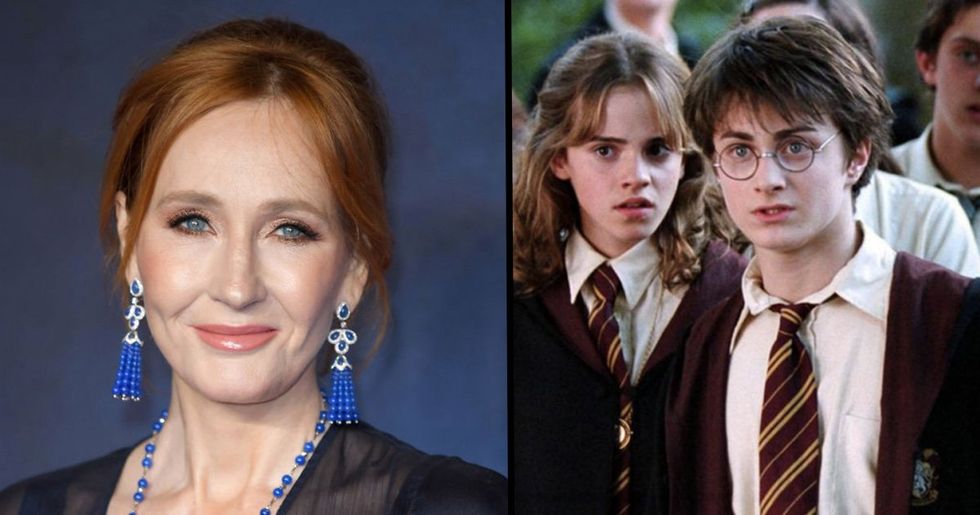 Harry Potter is not just a book, not just a movie, but a dedicated lifestyle, a commitment to magic and wonder. Fans of the series are still in awe of the intricacies of the books and find new details every time they open the pages. If you dive into the world of wizardry and witchcraft online, it's going to lead you to some hilarious, thoughtful, sometimes creepy, and incredible fan theories about the books and the movies.

Our favorite author and queen of Twitter, J.K. Rowling, will often interact with fans online. Recently, she responded to a tweet that left fans speechless. Many have tried to get J.K. to confirm certain theories, and very few are ever confirmed. But something special happened here. J.K. answered a fan and declared her favorite fan theory that will blow your mind.

If you aren't a Harry Potter fan, that's totally okay. Just know that your life has less meaning and you are kind of a loser.

The very first movie came out almost 17 years ago, and the first book was released just over 20 years ago. That means we've had 20 years to let the magical words of J.K. Rowling consume our lives.

Fans take their obsession with the books and movies very seriously– especially those who have been following the books since day one.

We've all got a wild imagination

J.K. Rowling's beautiful, magical world of wizardry and witchcraft allowed many of her readers to delve into their own imagination. They created stories, fan fiction and theories that stemmed from the books and movies.

We "stan" a funny author

Also, we're really thankful that J.K. stays on top of her Twitter game and gives us all a good laugh.

Everyone knows Albus Dumbledore, whether it was the one in the first, or the one that stayed for the remainder of the series.

The wisest wizard of all

I mean, it's almost impossible not to love this man. He is intelligent, caring, selfless, protective. He's easily one of the best characters in the series.

How could you possibly forget? It the final book in the series.

But is there more?

The final book left many readers to wonder and elaborate on several theories about the story of the Deathly Hallows, and how maybe, it meant more than we gave it credit for.

Tale as old as time

"The Tale of the Three Brothers" is beautifully illustrated in the movies and tells the story of, you guessed it, three brothers.

If you don't know the tale, let me give you the spark notes. This won't come close to the actual story but I'll do my best.

Get your tea ready

Basically, it's the tale of how three brothers cheated Death, and how Death wants to get back at them. They are each granted one wish. One receives the most powerful wand ever, AKA The Elder Wand. The second receives the Resurrection Stone, given the ability to bring people back from the dead. The third asks for the Invisibility Cloak, which keeps him hidden from death.

It gets more interesting

The first and second brother die, not fully aware of Death's trickery and desire to seek revenge. The third brother hides from death until he passes the cloak onto his son, and greets death as an old friend.

There have been a few theories about the Deathly Hallows and the Tale of the Three Brothers, wondering if there is more intricate symbolism than is explained in the books.

It's about to get twisted

One fan created a theory that says each brother represents an actual character from the book, making this tale entirely more interesting.

The theory thinks that the first brother, who accepts the Elder Wand, is Voldemort.

That's Professor Snape to you

The second brother, who asks for the Resurrection Stone, is good old Severus Snape.

And finally, the third brother is Harry Potter, who has the invisibility cloak. So who is Death in this story?

You better believe it!

It's none other than Albus Dumbledore. After a deeper dive into this theory, it actually makes a lot of sense, and J.K. Rowling agrees.

This is a pretty big deal

So let's go back to the beginning. In the first book, Harry Potter and the Sorcerer's Stone, Dumbledore gives Harry the invisibility cloak, which was supposedly passed down from his father, James Potter.

The cloak came with a note that said, "Your father left this in my possession when he died. It is time it was returned to you. Use it well."

That's about enough proof to show that Dumbledore represents death, as he held onto the invisibility cloak for Harry, ready to give pass it on, on behalf of James.

Are you not entertained?

But if you need more proof, as you hungry Potter fans usually do, there is some other evidence to show that Dumbledore could represent Death in this tale.

This better satisfy you

In the final book, Harry is shot at with the infamous killing curse (retweet if you cried) and enters King's Cross Station. Guess who's waiting for him there? DUMBLEDORE.

It must be heaven if Dumbledore is there

Dumbledore is Harry's "old friend," the first one to see Harry after he's been killed. He's looking as heavenly and holy as ever.

So there's Dumbledore, patient, wise, all-knowing and possibly the symbol of death, waiting for Harry after he's been killed.

Do you believe it now?

This theory is incredible, but it's even better that J.K. Rowling herself called it fitting.

Our queen called it her favorite, and now we love it even more.

There's no denying that this is an incredible discovery, one that J.K. might not have even thought up herself.

Fans were shook that this theory makes all too much sense, and has the approval of the author of the magic.

@jk_rowling makes sense, Voldemort only feared Dumbledore, death, the one thing he ran from and tried to avoid and conquer. Really like this
— Xavier Bhat (@Xavier Bhat)1440182584.0

Is it possible to be more shook? Shook overload? Shook to the extreme?

@jk_rowling My theory is the 3 brothers represent 3 reactions to death: lashing out, clinging on, and accepting. Harry does all three.
— Dr. Angela Fowler (@Dr. Angela Fowler)1440171296.0

Here's another amazing interpretation of the "Tale of Three Brothers." Neither interpretations are wrong, both just so very interesting.

There are about million Harry Potter theories, some that may never be answered, but that doesn't stop fans from asking J.K. her opinion of them. I don't know what this particular theory is, but it sounds fascinating.

There's a thread on Reddit that dives deeper into this theory and many of the comments further explore what this would signify in the grand scheme of the storyline.

Whether or not you think this theory is true, you can't deny the fact that it's awesome and worth the read. Share this article with your fellow Potter fans! Oh, and go Ravenclaw!