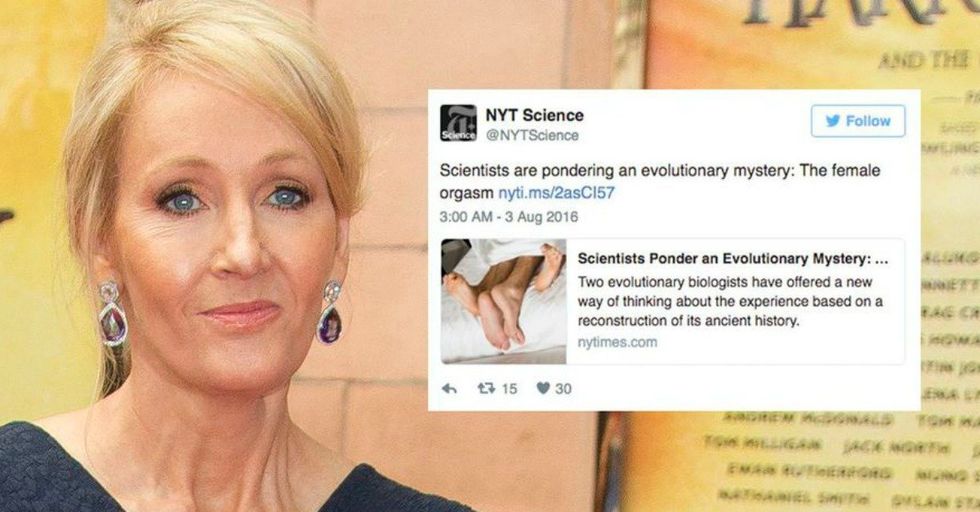 J.K. Rowling Had an EPIC Response To a Tweet About Female Orgasms

If you're only familiar with J.K. Rowling as the author of Harry Potter, then you're in for a real treat.

In fact, many would go so far as to say that she's as skilled in short-form writing as she is in writing her popular (and lengthy!) books.

And nobody is better at 140-character shut downs.

You might not think that a children's author is capable of getting quite so snippy, but those that follow her on Twitter know the OTHER J.K.

So when someone decided to lay into Serena Williams (never a good idea) for how she looks, J.K. had something to say.

She didn't mince words when clapping back at the troll/body-shamer. Fortunately, she had PLENTY of support.

And this week she fired off another gem, this time in response to a New York Times article about the “mystery" of the female orgasm.

Even the only New York Times isn't going to escape the wrath of the riled children's author.

Apparently, the function of the female orgasm has been an evolutionary mystery since the dawn of time, and this article follows scientists as they try to find out what purpose it serves. The article contains these few sentences:

Calling a basic biological function a "mystery" seems to put the blame on scientists who just never cared to really look into it, right?

OWNED. Rowling's Twitter skills shouldn't come as a surprise to any of us though.

It turns out that everyone's favorite author isn't just adept at Twitter, but at doling out some righteous criticsm.

She's not afraid to let her political and social views shine through, which can make some people quite upset for...whatever reason.

But if that wasn't a burn for the ages, then I don't know what is.

Tomi is gonna need some aloe after that burn. How wants to see a pay-per-view debate between the two? That could draw record numbers from both sides.

Rowling's Twitter is regularly home to some of the biggest owns and shutdowns on the Internet.

Especially when they involve politics. Many celebs don't touch hot-button issues, but J.K.'s confident enough to step into any arena for debate.

But every time you wade into politics, no matter what, there will be backlash.

Which of course, is nothing she can't handle. She created the wizard Harry Potter. She can handle this.

It's probably not hard to tell her leanings from her comments.

But it is her Twitter, so it's hard to fault her for letting her opinions shine through.

Not everyone is happy with their former favorite author's views though. She doesn't care though.

"and I've still got your money."

Even Voldemort can't help but get on board with the J.K. train. Politics make strange bedfellows.

When will people learn to stop messing with Rowling on Twitter?

There is just no winning. To paraphrase some wisdom, When you come at the queen, you best not miss."

Wow. She got another notoriously crotchety fellow on board!

Snape, thank you for your support. He probably is just stepping up to curry favor for appearances in prequels or something, but...still. Snape approves.