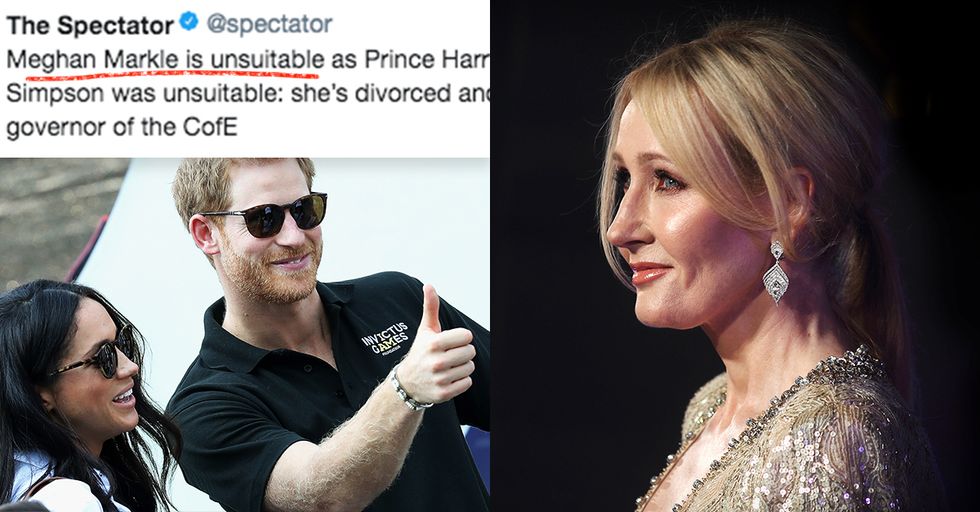 Meghan Markle just got engaged to Prince Harry. It's an amazing, momentous event, seeing that the British royal family has remained pretty much uniform since medieval ages. (*Psst, they're white – like skating-in-the-fjords-waving-at-passing-reindeer-while-wearing-arctic-fox-fur white.)

Markle, a successful actress and model, who played attorney Rachel Zane in the long-running TV show Suits, is not only a divorcee (*gasp*), she's also mixed race (*double gasp*).

And wouldn't you know, haters are already coming out of the woodwork.

British blog, The Spectator approached the news of the engagement with sharpened claws and a perfect facade of the British stiff upper lip.

Instead of congratulating the happy couple, The Spectator took a long, deep sip of hater tea.

Meghan Markle is unsuitable as Prince Harry's wife for the same reason that Wallis Simpson was unsuitable: she’s di… https://t.co/1Qc6JKXOJ6
— The Spectator (@The Spectator)1511779935.0

"Meghan Markle," the British blog sniffed, "is unsuitable as Prince Harry's wife for the same reason that Wallis Simpson was unsuitable: she’s divorced and Harry’s grandmother is supreme governor of the CofE." We're literally imagining they're sipping tea like the dowager from Downtown Abbey. Really? That's how they're going to play it?

However, times have changed since 1930s, which was when Simpson and Edward got married. In fact, we're not sure how The Spectator will take the news, but another member of the British family, Prince Charles, is married to a divorcee, Camilla, Duchess of Cornwall. *Shocker!!!*

As in, it's not really a thing. The queen has literally tons and tons of random titles and honorifics. The queen is, among other things: Grand Commander of the Order of the Niger for Nigeria; part of the Order of Temasek for Singapore – whatever that means; Most Illustrious Order of Queen Salote Tupou III (we're not going to even guess about this one...)

Not casting any aspersions on the Queen's religious diligence (as she is known to be a loyal member of the Church of England) but... this all feels very familiar.

Familiar as in, there's a long and well documented history of subtle racial politics on the part of the British press masked by articles citing concerns about propriety and history.

Prince Harry even had to issue a statement against all the media sites and blogs writing about Markle in racially dubious ways.

In a statement in 2016, the Prince's press secretary condemned the "racial overtones" of pieces on he and Markle's relationship with Markle and said, "Prince Harry is worried about Ms Markle’s safety and is deeply disappointed that he has not been able to protect her."

But then, Prince Harry had been driven to the brink by the "wave of abuse" hurled at Markle. One article even called her "Straight Out Of Compton." Psst.... While Markle is from Los Angeles, she's not from Compton.

J.K. Rowling undoubtedly had all this in mind because she acted the moment she saw the post.

She replied with a simple hashtag. #Teamdivorcee. A reminder – Rowling herself is a divorcee, but this statement took it one step further. It was a subtle British way of saying #Imwithher.

#TeamDivorcee is already trending on Twitter as people express their support for Markle.

"Maybe it’s time to embrace feminism and let the ‘divorcee’ thing go," is great, but one Twitter user took it even further:

Really? They are trying to claim that the problem with Wallis Simpson was that she was a Divorcee, not that she was a suspected #Nazi sympathizer? This is why we can’t have nice things. #TeamDivorcee #TeamMarryWhoYouLike (as long as they aren’t 14!!!) https://t.co/3LVwh2I6bT