J.K. Rowling Just Gave Some Really Important Advice to a Struggling Writer That Can Benefit All of Us | 22 Words 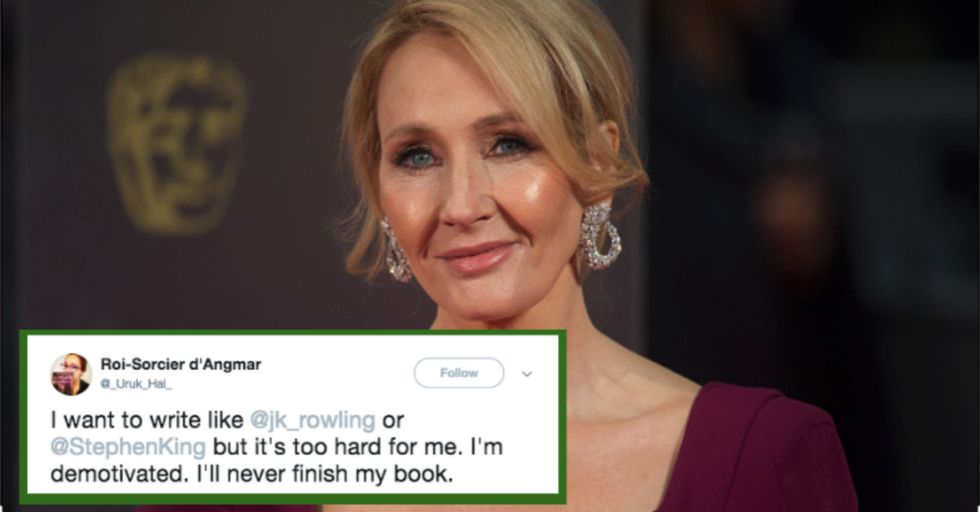 J.K. Rowling Just Gave Some Really Important Advice to a Struggling Writer That Can Benefit All of Us

People disagree about so many things. Seriously. As soon as you form an opinion, rest assured that there are hundreds or thousands of people who believe the exact opposite thing. It doesn't matter what it is. People will disagree with you. In fact, there's only one thing that everyone in the world can agree on. And that is that J.K. Rowling is incredible. Nearly every time she tweets, she fills the Internet with encouragement and happiness — two things that are often in short supply among the denizens of the world wide web.

This week, we have further proof of the fact that J.K. Rowling is a gift to the rest of us humans.

It appears that this particular writer has been struggling to find her voice. She wants to write like J.K. Rowling or Stephen King, but the words simply aren't happening for her.

Rowling noticed the tweet and had this perfectly spot-on advice for the writer:

"Don't write me," Rowling replied. "Write like you. Nobody else can do that. Finish that book." Um, is anyone else feeling hella inspired right about now?

A round of applause for Ms. Rowling!

Seriously, the woman can do no wrong. Not only did she create a vast, magical world filled with wonderful characters, she also gives free advice on the Internet.

The original writer was (understandably) overcome with joy upon seeing Rowling's advice.

We're pretty sure that a personal note of encouragement from J.K. Rowling herself is the ultimate cure for writer's block. We look forward to reading her future novel!

Other people on the Internet even began sharing their own advice.

See? Every once in awhile, Twitter can be a pretty OK place to hang out. As long as you're hanging out on J.K. Rowling's profile, anyway. We don't recommend straying too far from that light.