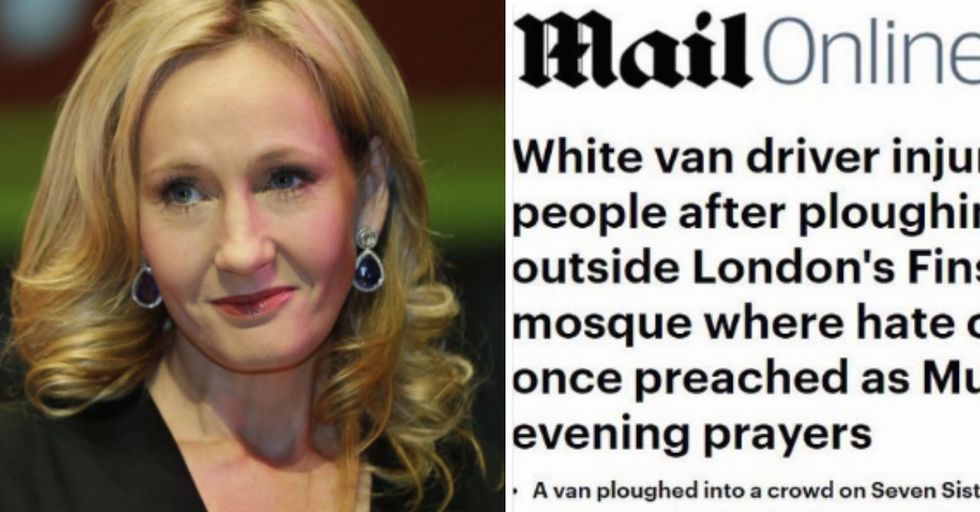 J.K. Rowling Shut Down This 'Daily Mail' Headline About the London Attack

No matter where you are in the world, it's safe to say that these are very scary times. Just weeks after the terrorist attack in Manchester, a man died and ten people were injured after a man drove a van into attendees of London's Finsbury Park Mosque.

The headline on the first BBC story was "Vehicle hits pedestrians in Finsbury Park," with many papers notably avoiding using the word "terrorism."

But one especially strange headline came from the Daily Mail:

"Clean-shaven white man arrested by police as at least ten people are injured," the tweet read.

Immediately Twitter weighed in about the double standard many tabloids seem to have when reporting about Islamist attacks.

"This is not an accident, it's not a collision, it's not revenge. It's terrorism. The media should be calling it as such," another man tweeted.

"Man tries to kill people based on religion, thought he was a terrorist but turns out he's clean shaven."

"So if I got this headline right — we should ban all clean shaven white men from driving until we can figure out what's going on?" another one added.

It didn't take long for prolific writer and tweeter J.K. Rowling to weigh in herself.

And she had some very specific words for the Daily Mail — which, it should be noted, eventually updated the information to include the words "terror attack."

But before that happened, Rowling had a correction of her own:

"Let's talk about how the #FinsburyPark terrorist was radicalized," she went on to add, before praising those who who stepped in to help with the situation. It's a complicated situation, no doubt, but a good example of how information can be manipulated depending on the situation and those involved. Regardless, our thoughts go out to everyone who was affected.