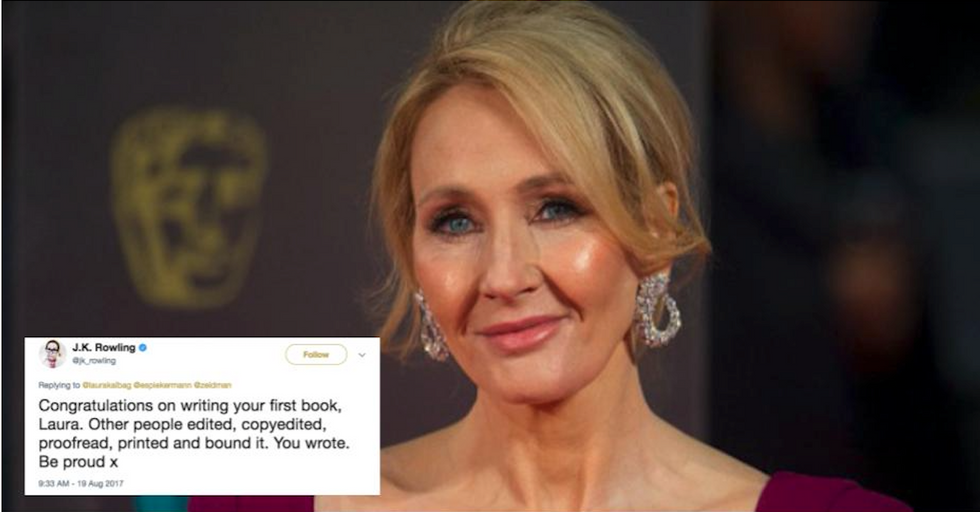 If you're a person on the internet, chances are you've come across a mansplainer. You know the type. They're quick to tell you exactly why you're wrong, and usually start every sentence with, "Well, actually..."

Dealing with mansplainers can be exhausting, but no injustice is too exhausting for J.K. Rowling! She recently stepped in and totally shut a mansplainer down, and we actually couldn't be more thrilled about it.

It all started when one woman tweeted that she'd written a book.

Laura Kalbag is a designer living in Malmö, Sweden. She recently finished writing a book all about making websites accessible for everyone. Obviously, she was super proud of her accomplishment, so she took to Twitter to share the news with her followers.

While most people were excited for Kalbag, one guy took it upon himself to rain on her parade in the most pedantic way possible.

In a tweet that has since been deleted, Erik Spiekermann told Laura, "Actually, you wrote a text. It took a few other people & skills to make that into a book." Because apparently the phrase "writing a book" is something that people get confused about. Thank goodness for for this man, without whom we would not understand books. Insert exaggerated eye roll.

At this point, the entire Twitterverse shared one gigantic eye roll and wished this guy would fall into a very deep "well, actually."

Buckle up, everybody! There's a man here to tell you how you're doing everything wrong. It's going to be a long, bumpy, and completely unnecessary ride.

Kalbag, who certainly did not need to respond, quickly apologized for her "misleading" tweet.

She obviously wasn't implying that she was the only one who worked on this huge project, and nobody needed Spiekermann's mansplaination to make that clear. This is something that didn't really need to be corrected, let alone apologized for.

Thankfully, the rest of Twitter refused to let the mansplainer get away with mansplaining.

You can always count on Twitter to put mansplainers in their place.

Some people even went back into Spiekermann's Twitter history and gave him a taste of his own medicine.

You know what they say. Quis mansplainiet ipsos mansplaineres? (That's pretend Latin for "Who mansplains the mansplainers?" and the answer is, "Twitter is ON IT.")

And since we're being very careful about giving credit where credit is due...

Do we need to start doing this for everything now? Because that's going to get ridiculous very quickly.

While many of Kalbag's followers quickly came to her defense, it was a tweet from J.K. Rowling that finally put an end to the nonsense.

Rowling came across Kalbag's tweet, saw Spiekermann's response, and decided to jump into the fray to help a fellow woman out. As you can imagine, when the Mother of Wizards steps in, she comes correct. It goes without saying that it didn't go well for Spiekermann. That said, we will tell you anyway, because it's hilarious.

Rowling made it clear that Kalbag had, in fact, written a book.

It didn't need explaining to 99.9% of the people who had seen Kalbag's initial tweet, but what can ya do? Rowling also told Kalbag to "be proud." Now, Kalbag can be proud of two things: 1. That she wrote a book, and 2. That J.K. Rowling tweeted at her about said book.

Directly after tweeting at Kalbag, we imagine Rowling said this:

As it turns out, the mansplainer was also basically finished at that point. After all, it's not easy coming back from a Rowling-style burn.

Rowling wasn't the only author to congratulate Kalbag on writing a book.

Roxane Gay also made it clear that Kalbag's initial tweet was perfectly fine, and that writing a book is a huge accomplishment. You know you're doing something right if two big-time authors step in to defend your tweets.

Eventually, some people took pity on Spiekermann and asked that the vitriol come to an end.

And it's true. Spiekermann's comments were by no means necessary, but we've all spoken out of turn at times. Most of us just don't get shut down by one of the most famous authors of all time. And thank goodness for that, because most of us couldn't handle it.

After his mansplain-y tweet started getting more attention, Spiekermann finally acknowledged that he'd messed up.

Alright, so, he apologized. It was clearly a misguided tweet in the first place, but sometimes all you can hope is that people will learn from their mistakes and try to do better in the future. But if he ever tries to mansplain again, you can bet that Rowling will be ready to go to the mat.