J.K. Rowling Responds to Controversy Over Whether or Not Dumbledore Is Gay in 'Fantastic Beasts' Series | 22 Words 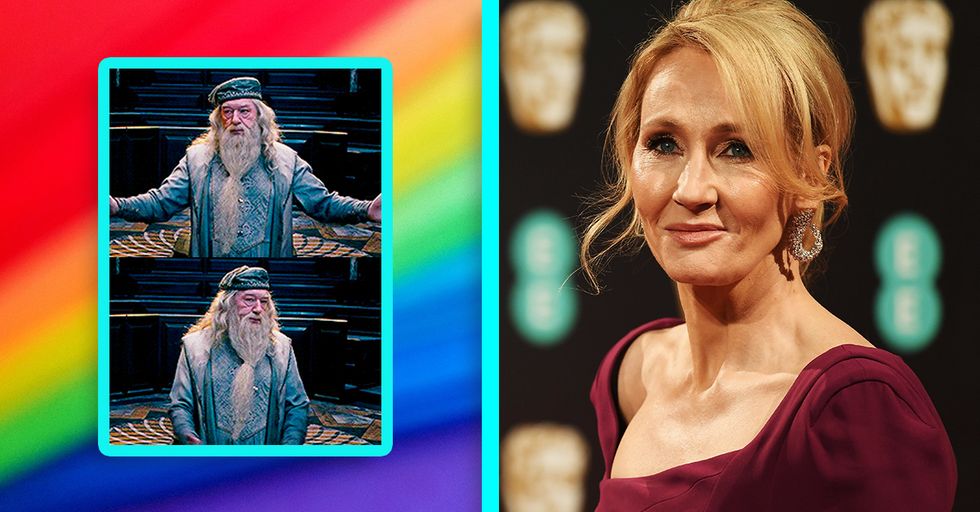 J.K. Rowling Responds to Controversy Over Whether or Not Dumbledore Is Gay in 'Fantastic Beasts' Series

In November of 2016, Fantastic Beasts and Where to Find Them came out in theaters. It was an immediate hit, grossing over $800 million worldwide, and becoming the eighth highest-grossing film of the year. Fans were overjoyed to be back in the Wizarding world, and they were even more impressed Eddie Redmayne's turn as Newt Scamander, a quiet and gentle "magizoologist."

The film was legendary author J. K. Rowling's screenwriting debut, and its sequel, Fantastic Beasts: The Crimes of Grindelwald, was assured. Fast-forward a little over a year later, and Fantastic Beasts 2 has already seen its share of scandal.
The first erupted when it was announced that actor Johnny Depp would be returning in his role as the villainous wizard Grindelwald. The once-beloved actor's reputation has taken a turn for the dark after his former wife Amber Heard accused him of domestic violence.
David Yates, director of the Fantastic Beasts franchise, waded into the morass with an untimely and unwelcome defense of Depp.

With Johnny, it seems to me there was one person who took a pop at him and claimed something. I can only tell you about the man I see every day: he’s full of decency and kindness, and that’s all I see. Whatever accusation was out there doesn’t tally with the kind of human being I’ve been working with. It’s very different [than cases] where there are multiple accusers over many years that need to be examined and we need to reflect on our industry that allows that to roll on year in and year out. Johnny isn’t in that category in any shape or form. So to me, it doesn’t bear any more analysis. It’s a dead issue.

Fans erupted with outrage, demanding that the movie be cancelled. It was beyond the pale of Yates to defend Depp and even more problematic of his to cast doubt on Heard's account. After a few months, however, the furor slowly faded.
Now, Yates has waded back into the thick of Twitter controversy once more, forcing none other than Rowling to issue a statement over the new kerfuffle.
While promoting the final Harry Potter book in 2007, Rowling made an amazing revelation to many hopeful fans. Beloved character Albus Dumbledore was actually gay. As she explained during an appearance at Carnegie Hall,

I always thought of Dumbledore as gay. [ovation.] … Dumbledore fell in love with Grindelwald, and that that added to his horror when Grindelwald showed himself to be what he was. To an extent, do we say it excused Dumbledore a little more because falling in love can blind us to an extent?

While the books never actually explored this, many fans considered Fantastic Beasts 2 the perfect opportunity to delve into Dumbledore and Grindelwald's story.
Sadly, it wasn't to be, because Yates nixed the idea during an interview with Entertainment Weekly. “Not explicitly," Yates said about the question of Dumbledore's sexuality. “But I think all the fans are aware of that. He had a very intense relationship with Grindelwald when they were young men. They fell in love with each other’s ideas, and ideology and each other."
The revelation had fans in an uproar. Not only was Depp still playing Grindelwald, but now, they wouldn't witness the love story they'd waited so patiently for.
The online fury soon got to be so intense, it reached Rowling, who was in no mood to deal with overwrought fans. She tweeted:

Being sent abuse about an interview that didn't involve me, about a screenplay I wrote but which none of the angry people have read, which is part of a five-movie series that's only one instalment in, is obviously tons of fun, but you know what's even *more* fun?

And added a gif of a man pressing the mute button for good measure.

Being sent abuse about an interview that didn't involve me, about a screenplay I wrote but which none of the angry people have read, which is part of a five-movie series that's only one instalment in, is obviously tons of fun, but you know what's even *more* fun? pic.twitter.com/Rj6Zr8aKUk