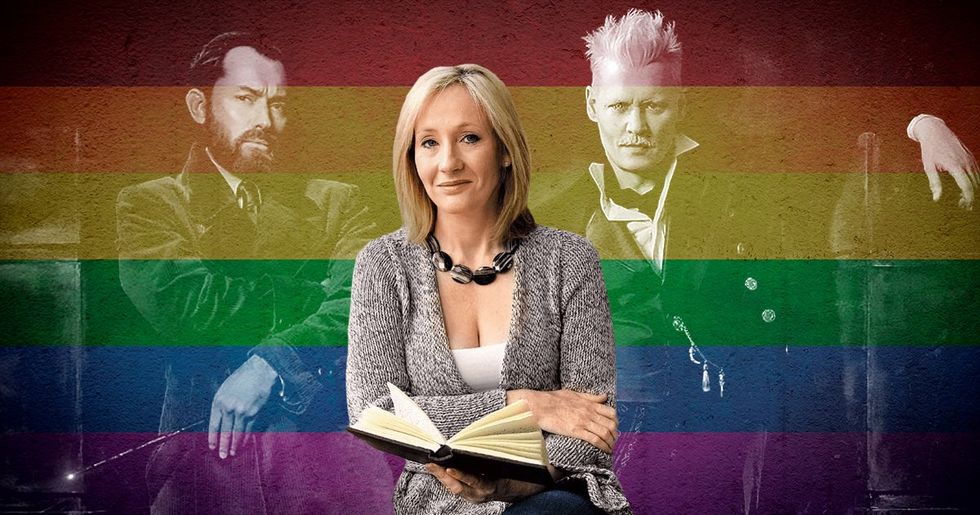 J.K. Rowling Say Her Characters Dumbledore and Grindelwald Had an ‘Intense Sexual Relationship’

The main Harry Potter book series may have ended years ago, but we're still learning about its characters today. Every now and again, author J.K. Rowling will drop a truth bomb about one of her iconic characters. And that's in addition to all of the other spin-offs that produced – specifically, Harry Potter and the Cursed Child and the Fantastic Beasts movies.

So, it's fair to say the Harry Potter universe is still thriving and evolving. Rowling recently let slip a new detail for fans to talk about, this time about Albus Dumbledore. We already knew that Dumbledore and Dark Wizard Gellert Grindelwald were close friends once and that Dumbledore is canonically gay. Now Rowling has confirmed that an 'intense' sexual relationship once blossomed between the two.

Here's the thing, though: not every fan is thrilled by this news, and it's not for any homophobic reasons. So let's take a look at Rowling's news – and why it's rubbing some fans the wrong way!

“Their relationship was incredibly intense," Rowling said during a feature on The Crimes of Grindelwald Blu-ray DVD.

There has been plenty of speculation on the relationship before.

After the seventh Harry Potter book's release, Rowling confirmed that she had always envisioned Albus Dumbledore as gay and that this factored into his relationship with Gellert Grindelwald. But we never knew exactly how much.

Rowling has also retroactively released more information on Dumbledore than most.

She revealed on Twitter that Albus Dumbledore is actually her favorite character in the HP series (aside from Harry, obvs).

And Dumbledore has a canonically tumultuous past.

He was always a genius and a brilliant wizard. But he had some not very altruistic ideas as a young man that another young wizard – Grindelwald – exploited.

In the books, Grindelwald and Dumbledore met as teenagers.

According to Rowling's Pottermore site, "Dumbledore fell in love with Grindelwald, and that added to his horror when Grindelwald showed himself to be what he was…"

The site adds: "Do we say it excused Dumbledore a little more because falling in love can blind us to an extent? But he met someone as brilliant as he was, and rather like Bellatrix he was very drawn to this brilliant person, and horribly, terribly let down by him."

We know he does, eventually.

Although they apparently have a blood pact in the movies not to fight each other, we know that pact eventually breaks. In the books, Grindelwald is defeated by a duel with Dumbledore in 1945.

So it's doomed love, at least on Dumbledore's end.

Especially after everything that happened between himself, Grindelwald, and Dumbledore's siblings – namely, a conflict that ended in his sister's death.

And now, we know if Dumbledore's feelings were, in some measure, returned.

"It was passionate, and it was a love relationship," Rowling said. "But as happens in any relationship, gay or straight or whatever label we want to put on it, one never knows really what the other person is feeling."

And that's what Rowling says she's focusing on.

"You can’t know, you can believe you know," she continued. "So I’m less interested in the sexual side – though I believe there is a sexual dimension to this relationship – than I am in the sense of the emotions they felt for each other, which ultimately is the most fascinating thing about all human relationship."

The director of the 'Fantastic Beasts' films chimed in too.

“This is a story about two men who loved each other, and ultimately have to fight each other. It’s a story for the 21st century," said director David Yates.

And we're all for LGBT+ representation.

But is it true representation if we don't ever see the relationship, or who these characters really were, in either the books or the films?

Because even with the confirmation, we don't know if this revelation will be reflected in the films.

It hasn't been, so far. And there's still no word on whether or not proof of this relationship will become evident in the remaining three Fantastic Beasts movies.

That's where Rowling is losing these disgruntled fans.

It's one thing to just tell fans that a character is gay or in a homosexual relationship. It's entirely another thing to portray that facet of the character, or that relationship, in the story itself.

We may have verbal confirmation on Dumbledore and Grindelwald...

And that's the gist of the fandom discourse happening right now.

@TheRLKing She could have just written in the books that Dumbledore and Grindelwald were lovers. She could have inc… https://t.co/fiasYir6Ou
— Rhysdux (@Rhysdux)1552809358.0

When put like this...yeah, it really wouldn't be too hard to just slip in a small piece of Dumbledore and Grindelwald's true relationship.

Fans have already been speculating on their relationship for a long time.

So JK Rowling has revealed Dumbledore and Grindelwald were in a sexual relationship, but still omits it from the fi… https://t.co/U5H94rh2dz
— James (@James)1552478271.0

At this point, it's understandable why only having it confirmed outside of the series is a letdown.

Because Dumbledore really doesn't give any indication of being gay.

I mean, sure, there's some longing looks into the distance in the latest Fantastic Beasts movie, courtesy of Jude Law-Dumbledore, but that's hardly proper recognition of a profound relationship!

And then there's this:

Fans are also commenting on the part of Rowling's statement where she said she wasn't "interested in the sexual side – though I believe there is a sexual dimension to this relationship – than I am in the sense of the emotions they felt for each other."

Because sure, 'Harry Potter' and 'Fantastic Beasts' are family franchises.

But you don't need to be sexually explicit to portray a relationship between two men, or any LGBT+ people for that matter!

Think of it this way:

There are so many straight relationships in Harry Potter. Heck, Lupin and Tonks have a baby during the seventh book! And we definitely didn't need a thorough recap of the--ahem--conception. We still knew they loved each other. Just like we knew that Teddy Lupin was a cutie pie!

On a lighter note, there have also been some pretty great jokes.

Because fans also couldn't help poking fun at the abrupt change of subject to Albus Dumbledore's sexual past.

I wonder who they’ll cast in the remakes when jk rowling decides harry potter was actually a dog
— Drew Gooden (@Drew Gooden)1552836898.0

Woah. Now that's how you keep your audiences guessing!

The one where your sexual orientation is apparently determined for you:

Um...Grindelwald is a little creepy-looking for me, sorry.

In fact, a RuPaul's Drag Race star came out with a revelation of her own:

Okay, I don't think anybody saw that surprise coming.

Uh-oh, it's spreading across franchises...

It's a remarkable superpower, to be sure...

So what comes next?

I guess we'll have to wait and see if Dumbledore and Grindelwald's now-canon romance shows up in the next Fantastic Beasts.

Yeah, it's disappointing that an amazing series like Harry Potter--because it is, truly, wonderful--hasn't had the best track record with representation. But there's still time for the Fantastic Beasts moves to take a step in the right direction!

Obviously, we're not holding our breaths for an epic romance.

Because that's not what Dumbledore and Grindelwald are about. They're two LGBT+ characters, and more. Getting to see all of them, instead of a limited portrayal of who they are, would be awesome for fans. What do you think of the Harry Potter 'verse news? Share this story with all your Potterhead friends!