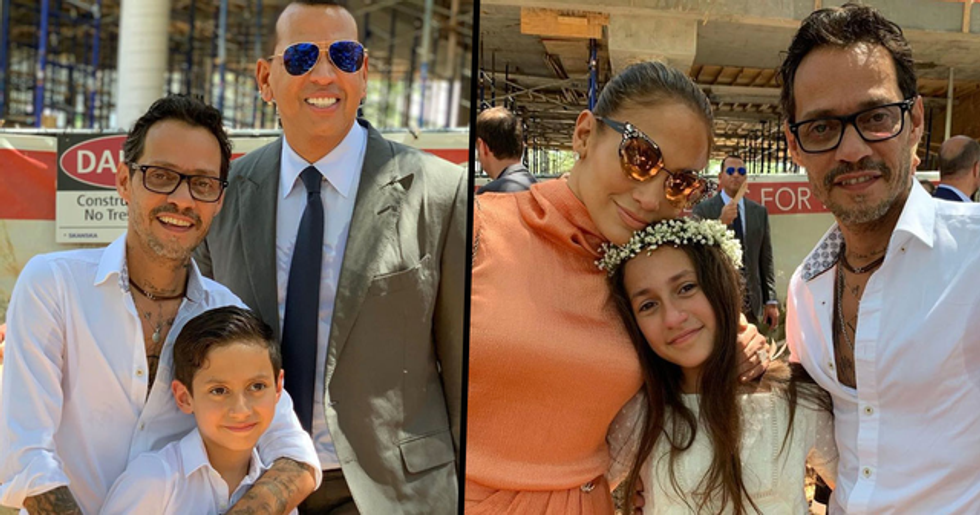 Unless you've been living under a rock, you will have had some inkling that it was Father's Day last weekend. Social media platforms become a cess-pit of tribute posts - some were cute, some were funny, and some were downright cringe.

And, obviously, celebrities are always keen to join in with the fun. A number of celebs took to social media to share some touching tributes, heartwarming throwbacks, and hilarious posts on that special day.

But one that stuck out, in particular, was J Lo's beautiful tribute to her ex-partner and father of her children, Marc Anthony - not for her message, in particular (although it was adorable), but for her current fiance, Alex Rodriguez's, comment on the post. Keeping reading to see the post, but be warned: it's damn cute.

They are the predominant male figure in our lives and, despite their terrible jokes, we love them.

It's the one day of the year wherein we can dedicate the full day to our dads - to show them how grateful we are for everything they do for us. So what better time to post a mushy paragraph online than on Father's Day?

And celebs go all out.

Guess what? Celebrities are dads too! And they certainly weren't shy on social media this year. A few of the cutest ones include...

The notorious celebrity chef showed a much softer side with an Instagram post depicting himself and his son (or twin...), Jack.

The singer/actress took to Instagram to share a heartwarming snap of her partner and 3 children, shortly after the birth of their most recent addition, Birdie.

I mean, just fathering the Jonas Bros is a pretty huge accomplishment alone, isn't it? However, the most heart-warming part of this post is the picture of Nick's wife, Priyanka Chorpa Jonas', late father, who sadly passed away before the couple met.

Hank's wife, Rita Wilson, shared a tribute post to all of the great fathers in her life... Which included some hilarious snaps of Tom. Just when we thought that we couldn't love him any more...

Halle shared an emotional post of her late father, in which she admits a strained relationship due to alcohol addictions. Nevertheless, Halle expressed her love for her dad in the post and acknowledged his love for her.

In a post shared by his husband, David Burtka, Neil Patrick Harris is pictured with their two adopted children. The How I Met Your Mother star was praised in the post by his husband for being caring, fun, and full of love.

Kim Kardashian has always been open about her love for her late father, Robert Kardashian. In her Instagram post, she paid tribute to the UCLA Robert G Kardashian Center for Esophageal Health, which researches Esophageal cancer.

Kylie shared a cute tribute to Travis Scott, who is the father to her baby, Stormi.

The Scrubs star shared this picture to commemorate his first Father's Day without his dad, who sadly passed away last year.

The soccer star is a widely celebrated dad himself, but he shared a rare picture of his own dad cradling a baby Beckham. Too cute.

Because we just can't get enough of the Beckhams.

Victoria has never been afraid to share her love for her husband. Though we'd be the same if David Beckham was our husband...

The singer-songwriter shared this wholesome snap of her partner, Mike Fisher, playing with their 2 sons.

Katherine shared an adorable picture of a young Arnie with his kids. (This may be our favorite yet).

The former First Lady shared a throwback of Malia and Sasha with their doting dad. (We miss you guys!)

Lovato dedicated the day to her step-father, Eddie de la Garza. Demi has opened up in the past about the abusive relationship that she endured with her biological father, who passed away in 2013. Demi has been incredibly candid about her battle with drug addictions, and she credits Eddie for being the consistent father-figure in her life.

This is Prince Harry's first Father's Day as a dad himself, so he and Meghan took the opportunity to share the first facial picture of Prince Archie. So cute!

The actress shared the cute throwback of her, her dad, and her brother, with a hilarious caption about being pressured by social media. We feel you, Anna.

Gigi dedicated a post to her dad, Muhamed Hadid, with a gloriously cute picture of them covered in cake. Love it.

We might start calling ourselves the "Di boss big dawta" too...

Miley posted a series of cute throwback snaps of her and Dad, Billy Ray Cyrus.

The musician shared a picture painted by his twenty month-old-son, Adonis. So wholesome.

James wrote a wholesome post that acknowledged all of the "imperfect dads" out there. His Instagram post was a poignant reminder that there is no one way to be a dad.

And last but not least: Jennifer Lopez.

The one that we're all here for. J Lo has always been an openly proud mom and she regularly dotes on her twin children on her social media platforms.

And her post dedicated to her children's father, Marc Anthony, was the sweetest thing.

Her post included a throwback video of Marc and their son, Max, and a few family pictures. She thanked him for their "two beautiful coconuts," and explained how much Emme and Max love him.

But Alex Rodriguez stole the show with his comment...

J Lo and Marc have always had a healthy co-parenting relationship.

Despite their split in 2014, the parents have remained on excellent terms and regularly do things with their kids as a family. And J Lo's new fiance has effortlessly been included in the family's routine. He has two children of his own, and the two families have merged to create one huge family.

J Lo included a special post for Alex, too...

Which showed a cute video of Alex hugging her kids. When can we become part of the Lopez family?!