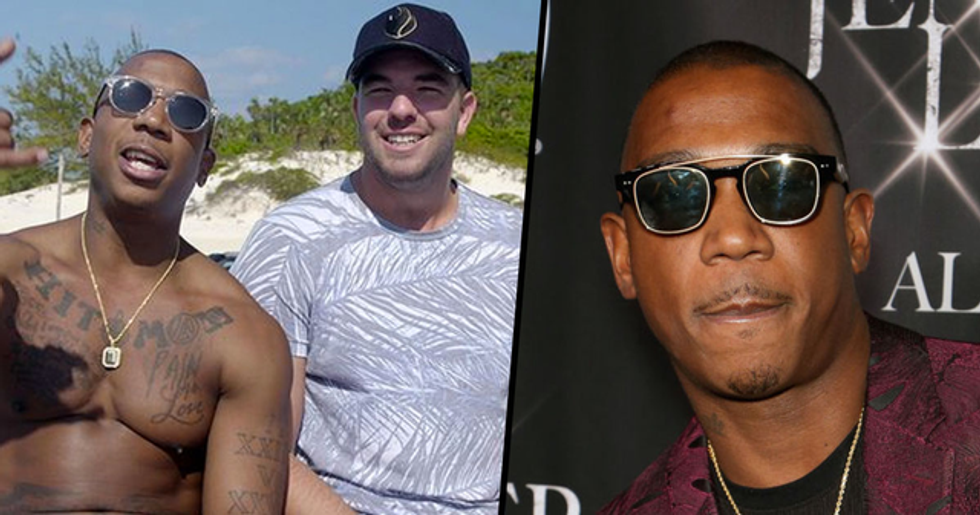 Fyre Festival, a self-proclaimed luxury musical event, was one of the biggest failures of all time. Instead of beautiful villas, yachts, and celebrities, guests were left in hurricane shelters, fighting for a place to sleep and eating sad Styrofoam packs of bread and cheese. The story of the festival was so bizarre and unbelievable that it became the subject of an excellent Netflix documentary in January.

The story of Fyre Festival gave us so much - first-hand accounts of the actual festival experience, memes about Evian water, that Ja Rule tweet. But in a strange twist in the tale, instead of slinking off into obscurity, Fyre Festival has had a shocking resurgence.

Yes, Ja Rule has promised that this isn't the end of the road for his luxury musical festival dream. Speaking to TMZ, the once-iconic rapper made some big claims about the potential future of his beloved Fyre Festival.

Fyre Festival was launched as a super-luxe event.

Its promotional video is one of the best examples of aspirational content ever created, including all of the most famous models of recent years frolicking on a beautiful beach.

The festival was founded by Billy McFarland and rapper Ja Rule.

It was designed to be a spin-off of the popular talent-booking app, Fyre. It used some of the best marketing tools, including paid promotion by tons of the biggest social media influencers.

It was supposed to be the most luxe music event of all time.

The promo video makes an abundance of lofty promises, relating to food, accommodation, artists and activities.

It also claimed to take place on a private island.

The vid claims the location was once owned by Pablo Escobar. In the end, due to massive issues with infrastructure, the festival was moved the Great Exuma, in the Bahamas.

Another aspect of the marketing campaign took place on Instagram.

Some of the biggest celebrity names, including Kendall Jenner, Emily Ratajkowski and Bella Hadid, posted a mysterious image of an orange square to promote Fyre Festival - for a hefty (and, at the time, undisclosed) fee.

But as festival-goers turned up, it became clear Fyre wasn't what it had promised to be.

One of the first images seen by social media was that of an incredibly depressing cheese sandwich - far from the gourmet catering the festival had promised.

Including shocking revelations that the high-end accommodations for guests were actually repurposed hurricane shelters, complete with wet mattresses.

Many thought the whole festival had been a huge scam.

And as Ja Rule had been a part of the festival creation, he was also required to shoulder some of the blame.

Fyre: The Greatest Party That Never Happened explored exactly what went on behind the scenes which took this festival from luxury party to fight-for-your-life.

It's an absolute must-see.

Honestly, some revelations about what went on behind closed doors just have to be seen to be believed.

Some saw Fyre Festival as something of a parable for our times.

The idea of social media and aspirational internet culture selling something that doesn't even exist was quite poignant to some.

The series was also loaded with amazing moments like this.

The cast of characters and the insights they offered into what actually went so very wrong were equal parts enlightening, hilarious and heartbreaking.

Some saw the festival as a paean to toxic masculinity.

The fact that Billy McFarland was able to swindle millions of dollars based only on a false promise and tons of confidence was astounding.

Some took the allegory further.

We can certainly see some frightening parallels between Fyre Festival and the wider political climate.

Others drew this comparison.

Is Brexit the next Fyre Festival? Honestly, it would be funny if it wasn't quite so accurate and depressing.

One scene in particular stood out to viewers.

In it, one of McFarland's colleagues was asked to ... convince a customs agent to release the festival's bottle of Evian water.

The method of payment was a little bit unusual.

The story was quickly picked up by Twitter, who went to town creating memes on the topic.

For those yet to watch the doc, spoiler alert!

In case you thought the lack of professionalism and bizarre illegalities ended at the festival's social media antics.

Another weird aspect to Fyre Festival?

The involvement of 2000s R&B legend, Ja Rule. Ja Rule was a co-founder of the festival, but managed to escape the fraud charges brought upon his business partner, Billy McFarland.

In one of our favorite Tweets of all time, Ja Rule claimed he knew nothing of the scam, and was another victim of McFarland's tricks.

He had some of the biggest R&B hits of the '90s, including smash hit "Always on Time," in collaboration with Ashanti.

While his music career has declines, Ja Rule has become something of a businessman.

He co-founded Fyre Media as an easy app through which brands could book talent, and it was a moderate success.

After the Fyre Festival disaster, though, the company went under.

But Ja Rule has maintained he wasn't aware of the scam being run by his co-founder, Billy McFarland.

But now Ja Rule has spoken up again.

Speaking to TMZ in this video, he claims the Fyre Festival dream is not dead. Ja Rule says, "In the midst of chaos, there’s opportunity. It is the most iconic festival that never was. I have plans to create the iconic festival, but you didn’t hear that from me."

Ja Rule has always staunchly claimed he was innocent in the Fyre Festival disaster.

And now it seems he wants to back up those claims, by creating the next Fyre Festival and actually doing it right.

But people are skeptical.

We have to say, it seems like the Fyre Festival reputation is going to be hard to recover from. It's safe to assume any trust the public has in Ja Rule is tarnished.

It seems like people just can't believe that Fyre 2.0 could be a success.

It seems like it'll only be the truly gullible who would be willing to take another gamble on a Ja Rule festival.

The NHL responded with the classic "blinking white guy" reaction gif. We have to say, this level of confidence from Ja Rule does seem to come dangerously close to delusion.

Others thought it was silly to stop at festivals.

With the Fyre brand, Ja Rule could expand into tons of other ventures. One response to this Tweet reads, "Is it just an empty bottle where you’re expected to drink 'vibes'?"

It seems the internet just can't with this suggestion.

We're looking forward to seeing if this festival will ever materialize - and wondering whether anyone would actually want to go?