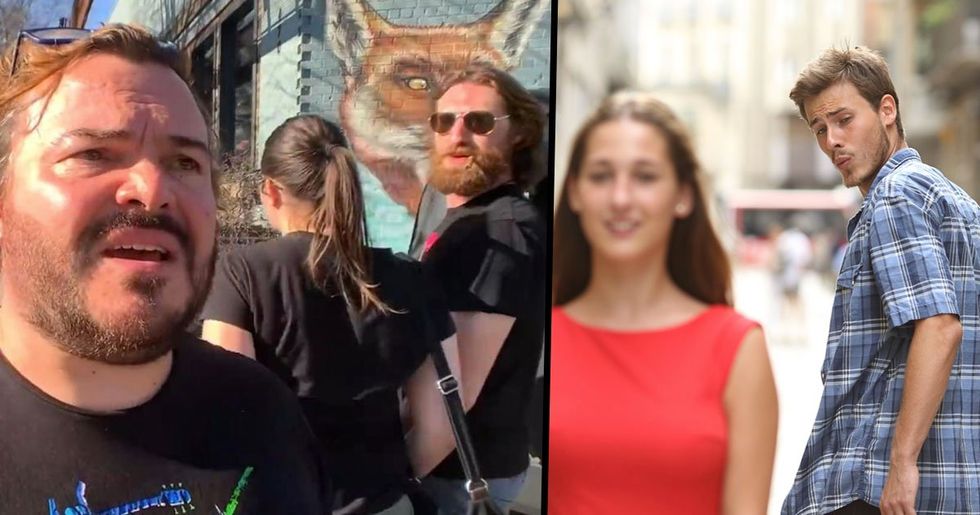 Jack Black is a comic genius. There's no denying it. Everyone loves him. He's charming, self-deprecating and just seems like he is so much fun. But recently he posted a new, hilarious video, and he didn't even realise what he had created.

Although Jack Black might not have known what he created, you can be sure that the internet spotted it instantly. Wait until you see how it happened. It's hilariously accurate.

You know the meme.

Antonio Guillem had taken the photo back in 2015 and didn't think anything of it. But then the internet found the stock image in 2017 and it went viral. Rather than being known as 'man looks at other woman,' as it was originally called, it became known as 'distracted boyfriend.'

The original picture is obviously sexist and degrading. It depicts a man objectifying a woman, while he walks with a different woman. It basically encapsulates all kinds of wrong. But the internet fought back and recreated it the opposite way round.

Although was it originally the distracted girlfriend?

In 1950 this image was published in a magazine for US Marines. It is uncanny how similar it is to the modern meme. This lady certainly seemed to like what she saw.

It's not the only version to come back from the past.

This meme comes from Back to the Future Part II, which was filmed way back in 1989. Maybe Marty McFly actually came back to our future and planted the original meme. Or maybe it's just a coincidence.

Or has it just been around forever?

@ELXGANZA Yoooo I found this one @ my local museum #distractedboyfriend https://t.co/MzRxTb7GqS
— The Visiters (@The Visiters)1523917748.0

One person on Twitter realised that the 'distracted boyfriend' isn't necessarily a modern idea. In fact they found a version of it in this old painting. It's pretty uncanny, and very disappointing. Hopefully it won't still be like this in another couple of hundred years.

This guy seems to struggle not to objectify women. And it does make you question why the girl would stay with him. Maybe she understands that it is just that this man happens to be surrounded by beautiful women. He can't help it that he's been conditioned by society to think it's his right to openly lust after women.

Is he a 'player,' or just a terrible human being?

This guy really seems like a jack-ass. But although most people laughing at these images, some people think it is 'classic lad' behaviour. The problem is that these photos normalise sexism, when it should be abhorred.

In fact the meme is part of a whole series.

After the success of the first image, the models and photographer decided to shoot a whole series of distracted photos. Apparently they found it difficult to keep a straight face because they were all having such a laugh. But it's not just a series of photos. The 'distracted boyfriend' has inspired a series of memes that have taken over the world.

It started off mild.

Some people acknowledged that they found the original meme quite hard to relate to. It turns out, that it's more apt for when they see a dog instead. We all know someone like this.

Some people decided to keep it sexist.

Some men like to have fun together drinking beer, others might prefer wine, or a life without alcohol. But they are all still men. Some women enjoy drinking beer, and that doesn't make them manly. That just makes them women that like drinking beer. This meme just perpetuates gender stereotypes that make it difficult to see everyone as equal regardless of gender.

People can be very perceptive on the internet.

Phil Collins was a drummer and singer in the rock band Genesis back in the '80s, before becoming a solo artist. You probably know loads of his songs, like 'In The Air Tonight.' But gradually he has taken a route into pop music that has made him widely disliked, a bit like the guy in this picture.

There is nothing nicer than picking up a good book and settling in to read it. But the promise of that often makes it difficult to remember how many good books we already have. Who else has a toppling pile of unread books next to their bed?

This meme sums up a generation.

As the world continues to crumble before our eyes, it can be hard to believe that the current order and system are the best way forward. Young people have always been more left-wing, but increasingly they are looking for an alternative route.

That's when the photoshopping started.

Trump is not a popular character amongst meme creators, and this is a classic example of that. It is a pretty good demonstration of how Trump's international negotiations seem to be going. And Putin couldn't look creepier.

Aladdin has come up against quite a lot of criticism.

When it was first mentioned, the new Aladdin movie sounded like it would be great. Disney remakes have been going pretty well, plus this was going to have Will Smith in it. But after seeing the trailers people are less than impressed. It looks like Frozen 2 might be the better movie, somehow.

Who doesn't love the representation of Henry VIII as the 'distracted boyfriend?'

Seeing as though it's #MusMeme day we had to share this classic meme from the Castle with you! #HeverCastle… https://t.co/zSPHfxPyL6
— Hever Castle (@Hever Castle)1534938186.0

Henry VIII is notorious for having six wives. He even created a whole new section of Christianity (and caused a lot of bloodshed as a result), so that he could create the idea of divorce. He is the ultimate 'distracted boyfriend.'

It's the meme that keeps on giving.

Back in 2017, it looked like this would be a classic meme that would die away and be replaced by the next one. But it just keeps on returning. This is the perfect queer version of the meme. Is anyone else reminded of Daniel Craig?

If you didn't do this 'S' did you even live?

When we were young, memes didn't exist. Instead, you had to make your own fun. Enter the letter 'S.' Nobody knows who started it, or why we all did it, but this meme is the perfect meta-representation of the past and present combined.

It had to be done.

Since Kylie Jenner lost her title as having the most-liked photo in the world on Instagram, this egg has been popping up all over the place. It actually works pretty appropriately here.

But now there's a new 'distracted boyfriend' on the block.

There is no way you haven't heard of Jack Black. He's been keeping us in stitches for over two decades now. He first came to prominence in 2000 playing record-store geek Barry Judd opposite music aficionado John Cusack, in High Fidelity.

The moment we knew we needed Jack Black in our lives.

School of Rock is one of the coolest movies of all time. Who doesn’t love the idea of suddenly becoming part of an epic rock band instead of being stuck at school? And with lines like 'stick-it-to-the-man-neosis' and 'you're tacky and I hate you', how can you not love this movie?

He will always keep us laughing.

He hasn't just been in comedies. He tried some more serious roles, such as when he played Carl Denham in the 2005 remake of King Kong. Then there was The Holiday, where he played the very lovable Miles opposite Kate Winslet. But it is Jack Black's humour that makes him a national treasure. His role as Nacho in Nacho Libre is the perfect sort of movie for him to run wild.

Jack Black is well known for his love of music.

Jack Black and Kyle Gass made a movie about their own band, Tenacious D. In the movie they are a record-breaking band in the quest to search for the pick of destiny. In real life they are still a rock band who tour around and play in front of huge crowds. It looks like fiction became reality.

Have you noticed it is Jack Black in all these movies?

Jack Black has a pretty distinct voice, but when it's all animated it can be harder to distinguish people. Back in 2002 Jack was the voice of Zeke, a sabre-toothed tiger, in Ice Age. Then in 2004 he played the vegetarian shark, Lenny, in Shark Tale. But he is best known for being the voice of Po in all three Kung Fu Panda movies.

In 2017, Jack Black starred in the remake Jumanji: Welcome to the Jungle. He starred with Dwayne 'The Rock' Johnson, Karen Gillan and Kevin Hart. The only difference is that Jack is actually playing popular, high-school girl, Bethany.

'Jablinksi Games' has nearly 4 million subscribers and he has said that he is going to post a video every Friday. The theme is meant to be gaming, but it looks like this channel is going to be about anything and everything.

Who did it best?

Jack Black has posted this hilarious video in which he tries out Chris Hemsworth's workout. Sadly, most of us know which one we would most resemble while working out. Chris Hemsworth plays the god Thor for a reason.

Jack is currently filming for the new Jumanji movie, which is set to come out in December. He was just vlogging about going for some food after working out. It was just a regular day for Jack Black. But then check out what happens around the 8 minute mark.

If you didn't, luckily this Twitter user found it for us. Jack Black has become the other woman in the 'distracted boyfriend' meme. It's just too perfect.

Inevitably, as a new meme is found, people start re-using the old memes together with the new, as you can see here. The internet is a machine that cannot be stopped. How long until the 'distracted boyfriend' has waves and air pods, and the girlfriend becomes the egg?