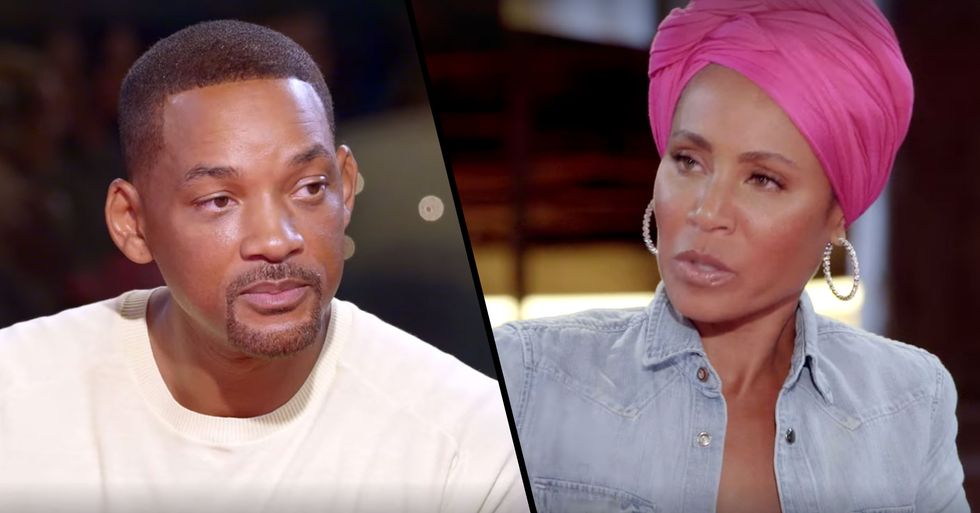 Jada Pinkett Smith Confronts Will Smith About His Alcohol Use

Jada Pinkett Smith is not one to hold back when it comes to discussing her private life - the actress has been very open during her popular Red Table Talk web show.

In one of the most famous episodes, Jada actually invited Will's ex-wife, Sheree Zampino Fletcher, on to the show. The two women spoke candidly about their rocky relationship but revealed that they had become a strong unit, and support each other in the bringing up of their children.

In the most recent episode, Jada sits down along with her mother and daughter and speaks to her husband, Will. Although her Fresh Prince husband is well aware of how deep Jada goes during these talks, when questioned about his drinking, he struggles to respond. Relentless, Jada refuses to remove the card from the table, forcing Will to talk openly.

Continue scrolling to learn about the intriguing relationship between Jada and Will.

We will also discuss whether what Will revealed during the Red Talk has damaged the world's perception of this supposedly perfect marriage...

Smooth as ever, Will didn't waste any time in asking Jada to be his girlfriend. Apparently, Will asked Jada if she was seeing somebody. When the actress confirmed that she was not, in fact, seeing anybody, he said: "Cool, you’re seeing me now."

Sometimes, when you know, you just know.

According to Will, he knew that Jada was the one after watching her in the show, A Different World. Sitting at home, seeing Jada play Lena James on the popular college TV show, he knew that they were well suited. He recalled: "I knew there was something in our energy that would be magic."

Jada and Will had actually already met.

In an ill-twist of fate, which could have seen these two have a fairy-tale romance, Jada was turned down from playing the part of Will's girlfriend when she auditioned for the Fresh Prince of Bel-Air role in 1994.

Apparently, Jada was considered to be too short and so the part went to Nia Long. Fate brought them together again, though! Jada's height certainly wasn't a problem for real-life Will...

The fact that Will was married did throw a spanner into the works.

Not that Will and Jada had an affair or anything, but, for Will, after getting married to first-wife, Sheree, he realized he should have been with Jada.

Will Smith was riddled with heartache.

Knowing that he had married the wrong woman weighed heavily on Smith's chest. Smith recalled the conflicting time on another episode of Red Table Talk. The actor spoke frankly and said that he realized that it was Jada he wanted while having a meal with his ex-wife. He said: "I was sitting in a stall and I was crying and laughing uncontrollably, and I knew [Jada] was the woman I was supposed to be with, but I was never getting divorced...I went back out, sat down with Sheree and started going back on with my life." Heavy, right?

Fortunately, everything worked itself out.

Morally conflicted Will couldn't bring himself to break up his marriage and the family he had with his first wife and their son, Trey. Fortunately, Sheree didn't like being married to Will very much and asked to separate - sometimes, it's just not meant to be. As soon as Will was free, he called up Jada, asked if she was seeing anybody.... and well, the rest is history!

Will and his first wife, Sheree, had a very amicable split and the two remain friends today. As demonstrated in the picture above, Will, Jada and Sheree pitch in together to look after their modern family. Cheese sandwiches, anyone?

The exes are so close that Sheree was invited to celebrate Will's fiftieth birthday with all of the family. This progressive family certainly demonstrates a positive example of how it can be done.

Jada and Trey have a really special bond.

Sometimes, children of divorce can feel like outsiders within their own families. Will Smith's son, Trey, from his first marriage, certainly doesn't feel like that. Hardly the wicked step-mom, Jada treats Trey as if he were one of her own - even calling him "the handsome one" in the caption of the above picture.

The Will and Jada parenting masterclass.

Jada and Will have clearly been excellent parents to their bunch. Well aware that they were bringing their children up into a world of privilege, the couple has certainly instilled an understanding of hard work into their children. They have also encouraged them to think and learn and question everything around them and to challenge what they don't agree with.

Is their anyone more woke than Jaden and Willow Smith?

This sibling duo has been making waves for a long time. Willow had a hit single with "Whip My Hair" when she was ten-years-old. Her brother, Jaden, starred in The Karate Kid around the same time, himself only being about twelve-years-old. Now, Jaden runs some kind of water-carton-save-the-planet-business, as well as bring a successful rapper, actor, fashion icon, whilst Willow is a fully-fledged singer-songwriter, poet, actress, model, etc. etc. Basically, these kids, who are barely into adulthood, have already achieved a heck of a lot more than any of us ever will - and they're super humble about it, too. If you've ever watched a Red Table Talk or read an interview with Willow or Jaden, you'll know these kids just seem like genuinely nice, down to earth young people.

Willow and Jaden had a lot of interesting role models growing up.

It's little wonder these kids turned out to be so wise. With Will and Jada as parents, as well as growing up surrounded by the most interesting actors, artists, and minds of the time, it was almost inevitable that they would do great things.

Jaden and Willow are breaking down boundaries.

The siblings don't seem to be phased with what the general public thinks about them. They use their platform of celebrity to create interesting art and break down ideas around sexuality and gender. They are certainly the kind of kids you could be proud of.

Family is incredibly important to Will and Jada.

Jada, who grew up with a single mom, never believed that she would have a big family. That all changed when she met Will. Talking at Vh1's Dear Mama Event, Pinkett Smith spoke about how lucky she feels to have a husband who loves her and three children that she adores. She said: "I was able to create, for myself, something I never had—which means family."

Will Smith loves being a father.

Smith considers that the role of a father is often overlooked in mainstream media. In an interview that he gave during the press tour of his movie, The Pursuit of Happyness, Will discussed how he felt that a father's love for his children is not something we see presented very openly on the screen. Speaking to aalbc, Smith expressed that: "The desire to be a good father is really innate. There aren't a lot of movies that depict that relationship because men, we have to pretend that we're not that emotional about it." Being open and loving with his own children as always been important to Will.

Was it always happy families?

Candid Jada is not the kind of person to shy away from the bad and make out that her life is perfect., but, typically, when it comes to her relationship with Will, she has been furiously protective. Throughout the years, there have been rumors about marital woes, whispers of divorce, and even speculation that both stars are actually gay. Will and Jada have slammed these claims again and again.

Jada has typically been quick to defend Will whenever a bad word is said against him. When asked by HuffpostLive whether they would ever divorce, Jada admitted that the future is unpredictable, but that "he's been by my side through some of the most difficult parts of my life. And so that's something you can never take away." It's true that, having been together for twenty-one-years, the pair must have been through a heck of a lot. Jada is wise to consider that things may well change, but she insists that "one thing is for sure: I love him deeply and he is my best friend." Aw, relationship goals, eh?

Alcohol abuse can destroy even the most strong marital bedrock.

During the most recent Red Table Talk, Jada asked her husband: "What about your relationship? How often are you drinking alcohol?" To which Will sharply replied: "That's my personal business, Jada."

Isn't everything in a marriage shared?

Will did begin to open up more. After initially appearing cagey on the subject, the actor discussed an incident at Jaden's twenty-first birthday party in which he drank too much. Will admitted: "On vacation time...it was a lot." The family all break out in laughter, in shared agreement with Will's admission, before he continues and admits: "Cause it's in front of my kids, it's like now I'm being a bad parent."

Being a good dad is seriously important to Will.

Will Smith might seem to be a relaxed, chilled out guy with his comic persona, but, in reality, I think he's a pretty serious guy... especially when it comes to work and his kids.

Will Smith remained sober at the start of his career.

Wanting to remain focussed and not get roped into bad habits that could jeopardize his career, Will never used to drink. In the Facebook Watch series, Bucket List, Smith stated that: "during my rise as a movie star, I was, like, wildly disciplined." The actor admitted that "I didn't drink for over a decade."

Will admits he's currently a bit out of shape.

During the Bucket List interview, Will admitted: "Being this far out of shape is kind of a little bit new for me." I mean, we all know it can be a slippery slope. When we stop exercising regularly, we start eating more junk food and the whole thing can just spiral. When asked by Jada on the Red Talk Table about how much he drinks, the actor evasively answers: "One or two a week."

Jada has faced her own battles with alcohol and addiction.

Jada admits that she has not had the healthiest relationship with alcohol in the past, something she had previously opened up about in another episode of Red Table Talk. The actress confessed she decided to go "cold-turkey" after she found herself thinking: "Now hold up. You're in this house by yourself going onto your third bottle of wine? You might have a problem.'"

Jada considers herself to have a binging personality.

Some people can consume alcohol, eat, smoke in healthy amounts, others can be compulsive, obsessive about it and not be able to control themselves. Jada considers herself to have a bit of a binger personality. When opening up about her relationship with alcohol on the Red Table Talk, Pinkett Smith admitted: "I am a binger and I always have to watch myself and how I can get obsessed with things. It's not what you're doing but why you're doing it ..."

They will never face it alone. And they will probably discuss it all to the world during one of their highly insightful Red Table Talks... The new season premieres today on Facebook Watch. It's true that Will Smith is getting older, but have you seen the photos of him where he looks just like The Fresh Prince of Bel-Air's Uncle Phil? The resemblance is uncanny! Keep scrolling to see for yourself...