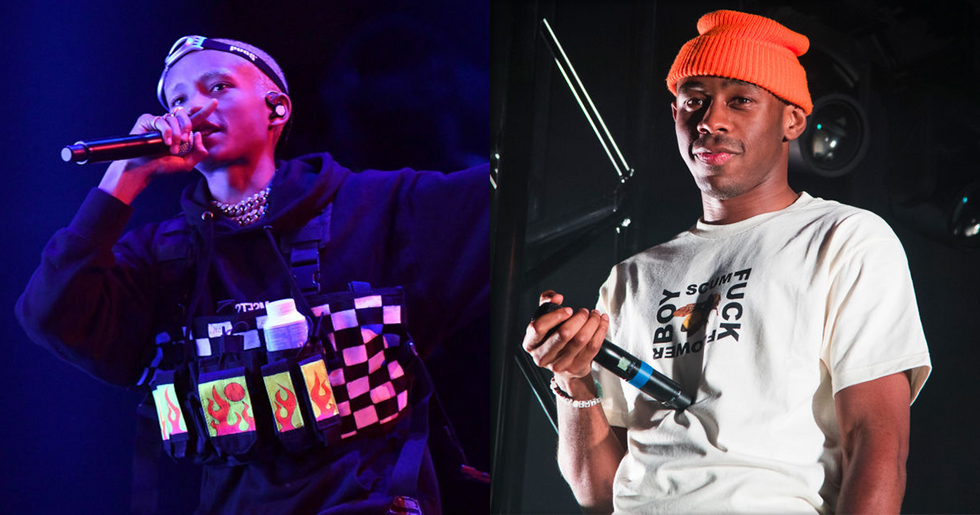 During this weekend's Camp Flog Gnaw festival, 20-year-old musician, artist, and deep-thinker Jaden Smith made a big announcement. In the middle of his performance, he told the eager crowd that the one thing he wants them to take away from the night is that he and 27-year-old fellow hip hop artist Tyler the Creator are "boyfriends."

Here's what we know so far: Tyler the Creator has rapped about “kissing white boys since 2004" and Jaden Smith has worn dresses and skirts in ad campaigns, on red carpets and even on the street. But neither of these things means that they have come out. Helpful reminder: coming out is a very personal, and often complex process. No one should ever force or push another person into coming out before they're ready, and outing someone against their will is not okay.

That's why the crowd was shocked when the camera panned down to Tyler and he started to vehemently shake his head "no." Check out the video below for yourself to see how it went down.

Here is the video:

Smith starts by saying, "I wanna tell you something.... Tyler doesn't want to say." Uh oh. Then, he starts to yell, "Tyler is my mother******* boyfriend, and he's been my boyfriend my entire mother******* life!" The crowd screams as Smith continues with, "Tyler the Creator is my f****** boyfriend!"

At this point, the crowd gets rowdy.

Smith asks people to step back because the Fire Marshall is going to "shut them down." On the jumbotron, Tyler the Creator seems to be laughing and giving Smith the bird. But is it in irritation or affection?

Did Smith just come out in front of tons of fans, outing Tyler the Creator with him? Or was this a very large scale prank? Only time will tell...