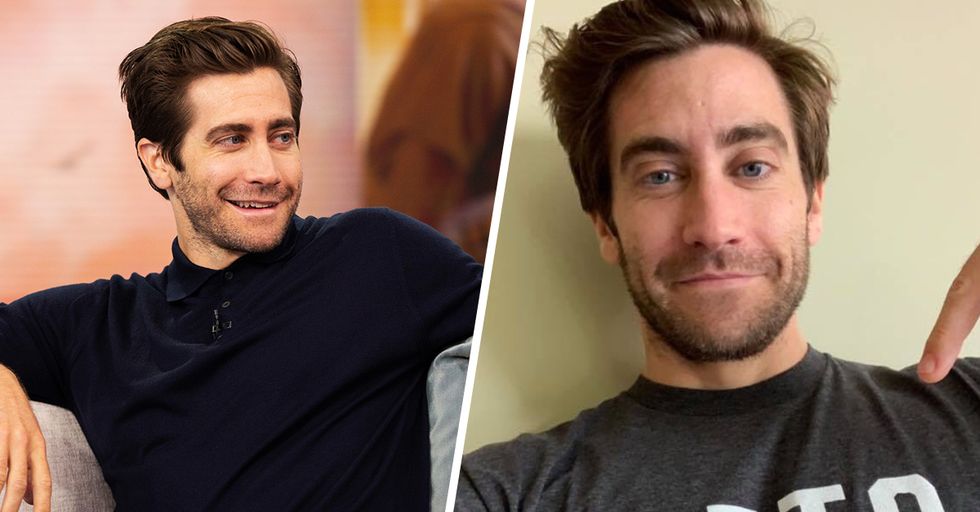 Since you are currently on the Internet, I'm going to go ahead and assume that you know that the U.S. Midterm Elections happened yesterday. Even if you somehow didn't know it was election day when you woke up in the morning, surely the hundreds of "I Voted" sticker selfies clued you in eventually.

This election has been forefront in many people's minds (and newsfeeds) for several months — and not only for normal people like you and me. If you follow any celebrities on social media, chances are you most likely noticed they were posting their own political endorsements (and throwing plenty of shade) online in the weeks leading up to the big vote.

Jake Gyllenhaal sure did! While he has shared plenty of political opinions online over the past few months, it was his wardrobe choice a couple days before the midterms that stirred the pot.

He urged his followers to vote for change, compassion, civility, and wisdom in the midterms. He then went a step further and encouraged people to vote specifically for Stacey Abrams, Beto O’Rourke, and Andrew Gillum (three Democratic candidates in particularly contentious races). He was also wearing a "Beto" T-shirt to show his personal support for O'Rourke. As you can imagine, some people weren't pleased about it.

Conservative Twitter followers were quick to point out that Gyllenhaal doesn't live in Texas, and therefore would not be able to vote for O'Rourke.

Which is honestly all-around ridiculous. I didn't realize it was a rule that you could only support candidates who live in your own state. Just kidding. That's not a rule. You can support any candidate from any district! And you should! In fact, although O'Rourke did not end up winning the Texas Senate seat, he received support from all over the country, both from celebrities and non-celebrities alike.

In the can? Say it ain't so! What is Jake Gyllenhaal going to do without the support of people who didn't like his T-shirt?

Of course, plenty of people on the other side of the political spectrum fell in love with Gyllenhaal over his support for O'Rourke.

Something tells me that Gyllenhaal is going to make it through this latest "controversy" just fine.

And I, for one, am glad to be living in a time when celebs and non-celebs alike are sharing their political opinions and striving to get people motivated to vote in their elections. Although the midterms may be over (and we can all enjoy a few weeks without political ads on TV), there's no reason to stop our involvement in political issues. There will be another chance to vote before you know it! Can't wait to see what shirt Gyllenhaal wears then...