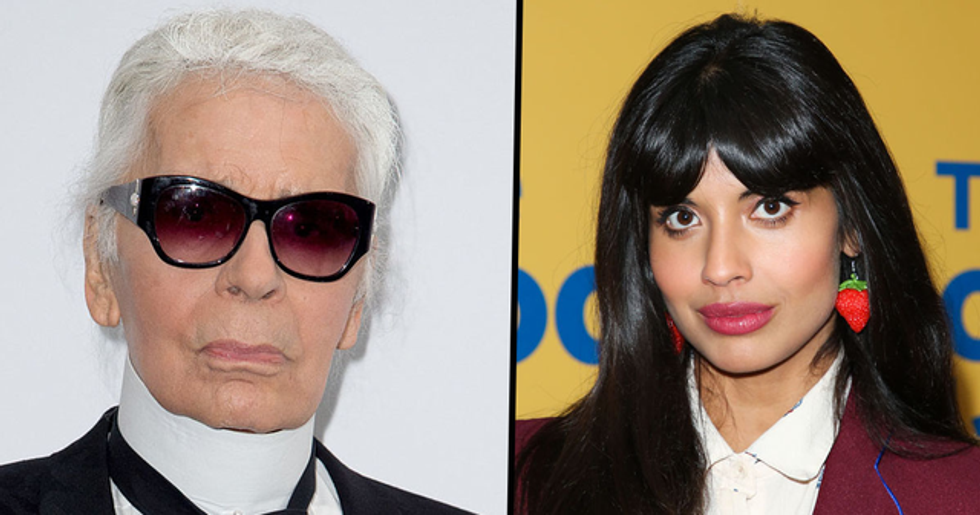 Celebrity culture often leads to some internet weirdness, but nothing is stranger than how the general public reacts to death. The intense emotional response to the death of someone you've never met sounds a little irrational - but when someone you've admired for a long time passes, it truly can feel like a sensation of loss.

The celebrity and fashion world was shaken this week by the passing of Karl Lagerfeld. The iconic designer, most famous for his work at Chanel, is often lauded as a creative genius. But he has had a slightly checkered past when it comes to more social and personal issues.

As the world collectively mourned for this controversial figure, some celebs spoke out. One particularly loud voice of dissent was actress Jameela Jamil. Known for her body-positive social media crusade, she called out Lagerfeld in some particularly harsh social media posts.

Chanel is an iconic fashion house.

Based in Paris, the haute couture label is credited with revolutionising the fashion industry, creating simple but effective, modern clothing.

It was also founded by a female.

Gabrielle (or, as her friends called her, Coco) Chanel had a vision for clothing which wasn't as constrictive as the corsets of the earlier 19th century, and popularized a more preppy, sporty chic.

Even those who aren't into fashion have heard of Chanel.

There are certain Chanel products which have transcended the fashion world and are cultural icons - such as the double flap bag, or the No. 5 perfume.

Another image synonymous with the Chanel brand is that of Karl Lagerfeld.

The German born designers worked as the creative director of Chanel, a position he started at in 1983 and truly made his own.

He had a passion for beautiful simplicity, and many of his collections with Chanel were lauded by both the fashion industry and the world.

His collections in the '90s really made his name.

Many see this as the golden era of Chanel, as the biggest supermodels of the age plus Lagerfeld's iconic designs were a match made in fashion heaven.

Many of the signatures of this era are still synonymous with Chanel today.

Alongside his designing prowess, Lagerfeld was something of a mythical figure.

He was known for his stark white ponytail, signature black sunglasses and neat, clean, high collars. Lagerfeld was also known for his close bond with his cat, Choupette.

The death was the result of a long battle with pancreatic cancer. The designer was 85-years-old.

Many celebrities paid tribute to the icon.

Marc Jacobs shared a candid shot of the two together, holding up their respective Simpsons cartoons. Jacobs said the situation was "so sad. And strange."

Many models also posted about Lagerfeld.

Naomi Campbell shared a paparazzi snap of the pair, thanking him for "taking a chance on a 16 year old girl from South London and opening my eyes."

She Instagrammed a behind the scenes pic of Lagerfeld photographing a pregnant Kim, saying, "The world is so much chicer because you existed!"

But in spite of his obvious talent, Lagerfeld was a controversial figure.

During his career, he was at the center of many media storms. His track record on racism, for example, is a little problematic. He once used a verse from the Qur'an as a part of a catwalk show, which caused massive uproar.

Lagerfeld also had some troubling issues with women.

He has made many misogynistic remarks in his career, but was notably in opposition of the #MeToo movement.

As with many fashion industry leaders, much of his anti-female rhetoric was somewhat superficial.

Lagerfeld held a very set idea on what was attractive and unattractive, and often criticised celebrities for their looks. His favorite topic to comment on was womens' weights.

For Lagerfeld, thinness was important to high fashion.

He publicly spoke out against model Heidi Klum and singer Adele for their respective weights. In his defence, Lagerfeld has claimed that his controversial persona is an act - though many don't buy it.

In the wake of his death, much of his remembrance brushed these problems under the carpet.

Until one article by Lara Witt was published in Wear Your Voice magazine. The polemic piece was titled, "Stop Mourning Oppressors: Anti-Condolences For Karl Lagerfeld."

Many spoke out in support of the piece.

One firmly positive voice came from comedian and podcast-host Erin Gibson, who has been vocal in the past about her issues with Lagerfeld and his misogynistic views.

An even bigger celebrity then spoke out.

Actress, model and body-positivity activist, Jameela Jamil, tweeted a link to the piece. She also called Lagerfeld "fat-phobic," "misogynist," and "not the best person."

Which, as you may have anticipated, caused some backlash.

It's such a tricky issue to call someone out after they've died. Not only does it feel like using their death for your own gain, but it can seem disrespectful. However, it can be equally difficult to see only positive tributes to a person you know had so many archaic and unacceptable views.

Jamil is a British actress and model.

She's best known for her work on the philosophical sit-com The Good Place. Jamil is also well known for her social media presence.

Jamil draws on her past experiences as a model, and a woman in the public eye, to call out fat-phobia and misogynistic beauty standards.

Jamil's posts about Lagerfeld caused some push-back, though.

@jameelajamil I understand what you were trying to do and I apologize if I offended you or anyone else. I just don’… https://t.co/UKinSfDFiM
— Cara Delevingne (@Cara Delevingne)1550678238.0

The most notable voice of dissent was that of model and actress Cara Delevingne, who had been a close personal friend of Lagerfeld's.

While Delevingne didn't outwardly disagree with the message, she took issue with the timing.

@jameelajamil It saddens me deeply that anyone was hurt, that I do not condone. It is not possible to go through li… https://t.co/qMRl7SVx7i
— Cara Delevingne (@Cara Delevingne)1550678770.0

Delevingne chalked Lagerfeld's numerous controversies up to "mistakes," and claimed he should be forgiven in his death.

Jamil wasn't having it.

She argued that you can't call a persistent track record of harmful and abusive views a simple mistake, but still sent love and condolences to Delevingne.

Jamil also pointed out the place Delevingne was coming from.

She claimed as someone of such intense privilege, it's almost impossible to imagine the hurt and pain caused by some of Lagerfeld's words and actions.

Many came out in support of Jamil.

It certainly takes guts to swim so resolutely against the tide of popular celebrity opinion, and it seems Jamil is pretty fearless when it comes to standing up for what she believes in.

Others pointed out the narrowness of Deleveingne's viewpoint.

The issue of her not being able to imagine anything outside of her own experience is one of the cornerstones of privilege, which also makes it a cornerstone of oppression.

There was one positive to the interaction, though.

Both Delevingne and Jamil spoke to one another with a huge amount of respect, and never resorted to meanness or name calling. This is almost unheard of for a Twitter spat, and we have to give both women a huge pat on the back for the way they conducted this disagreement.

We think it's gained Jamil a fair few fans.

Many have taken issue with her past social media crusades, finding them all a little bit twee and cringe-inducing. However, the way she calmly, respectfully and convincingly put her point of view across is without doubt super-impressive. Well done!