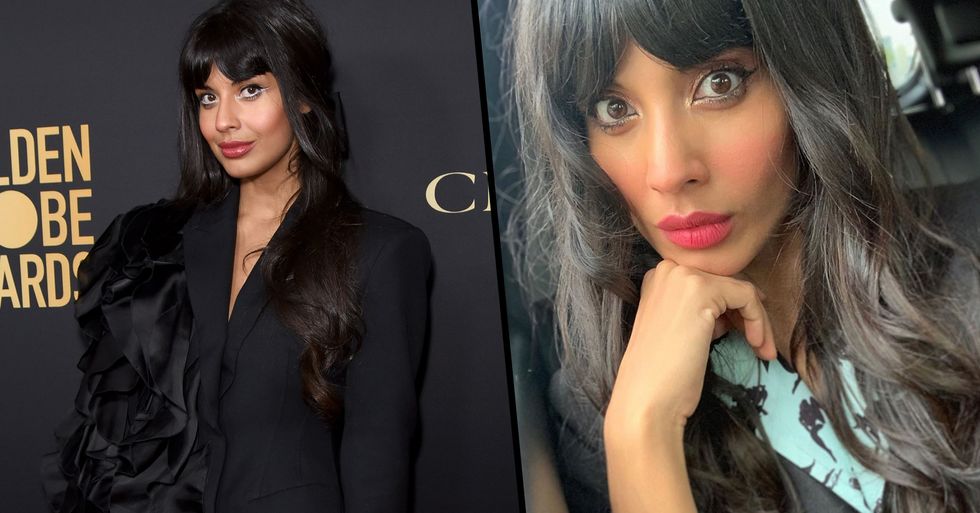 Jameela Jamil Comes out as Queer

Jameela Jamil is truly the definition of a strong, independent woman.

The British TV presenter is also known for her strong opinions and not being afraid to voice them.

But she has made headlines today after officially coming out as queer.

Who hasn't heard of Jameela Jamil?

Well, if you haven't, you've probably heard her on Twitter!

Jameela is a British TV presenter and personality...

And the thirty-three-year-old has worked very hard to get to where she is today.

She was brought up in London...

And she described herself as "bookish" and "shy" at school amidst her suffering from anorexia between the ages of fourteen and seventeen.

Jameela was bullied severely throughout her school years...

"I was physically and verbally [abused] very badly at school," she told the HuffPost. "Like beaten senseless by kids for being from a Pakistani family and for being poor. That was before the age of 10, and that went on until I was about sixteen."

She was also diagnosed with hypermobile Ehlers-Danlos Syndrome.

This is a genetic disorder that causes loose joints, joint pain, stretchy skin, and abnormal scarring, and after Jameela was hit by a car when she was seventeen, she broke several bones and damaged her spine.

The car accident helped her develop a better relationship with her body...

And when she recovered, Jameela went on to study at Queen's College School in London and alongside teaching English as a foreign language, she pursued a career in modeling and photography.

Jameela used her personal traumas to empower others...

In 2015, she launched Why Not People? - an event and membership company dedicated to hosting live entertainment accessible to people with disabilities. She also campaigns strongly for the body positivity movement, and she has very publically slammed the Kardashian family in the past for promoting unhealthy dietary supplements.

She also campaigns with the battle against racism.

Jameela has been subjected to racism all of her life, with her explaining, "I've experienced racism out in the streets wherever I am." "I have experienced racism online from trolling. I just recently, in 2018, did this interview with Krishnan Guru-Murthy for Channel 4 and it was a widely circulated interview, and we got messages like, 'That room must have been stinking with those P**** in the room.' Those are the kinds of messages I receive on a daily basis."

But Jameela is a prime example of rising through the hate...

And she now has a very successful career on British television as a presenter, DJ, and host.

And she isn't afraid of letting others know exactly how she feels.

She has been in her fair share of heated online arguments...

And Jameela regularly stands up to potty-mouthed journalist Piers Morgan in furious debates about Meghan Markle.

But putting aside her firey debates...

And this week, she made a pretty big announcement...

She has announced that she is queer.

What does being queer actually mean?

Queer is an umbrella term that can include anyone within the LGBTQ+ spectrum who doesn't identify as heterosexual or cisgender.

She told her 1 million followers that she had previously kept silent about her sexuality as she feared she would be accused of jumping on the bandwagon.

She explained the meaning behind her signature rainbow emoji...

"I added a rainbow to my name when I felt ready a few years ago, as it's not easy within the South Asian community to be accepted, and I always answered honestly if ever straight-up asked about it on Twitter," she started by explaining. "But I kept it low because I was scared of the pain of being accused of performative bandwagon jumping, over something that caused me a lot of confusion, fear, and turmoil when I was a kid."

Her family had played a big part in her silence...

"I didn't come from a family with *anyone* openly out. It's also scary as an actor to openly admit your sexuality, especially when you're already a brown female in your 30s," she went on to say. "This is absolutely not how I wanted it to come out. I'm jumping off this hell app for a while because I don't want to read mean comments dismissing this. You can keep your thoughts."

Her announcement comes shortly after her involvement with the TV show Legendary...

The show focuses on ballroom culture and vogueing - a genre of dance that originated in New York in the late 1980s and was founded by black and Latino LGBT people, many of whom were disowned by their families for their sexuality and gender.

Many viewers felt that the panel should be made up of members of the LGBTQ+ community...

"I know that my being Queer doesn't qualify me as ballroom. But I have privilege and power, and a large following to bring to this show," she wrote. "I'm not the MC. I'm not the main host. I'm just a lead judge due to my 11 years of hosting experience, being fully impartial, a newcomer to ballroom (like much of the audience will be) and therefore a window in for people who are just discovering it now and being a long time ally of the LGBTQ+ community."

Jameela also announced that she would be taking a break from Twitter to avoid the nasty comments...

And all we can say is how much we admire Jameela's bravery to come out into such a vicious world of online trolls.