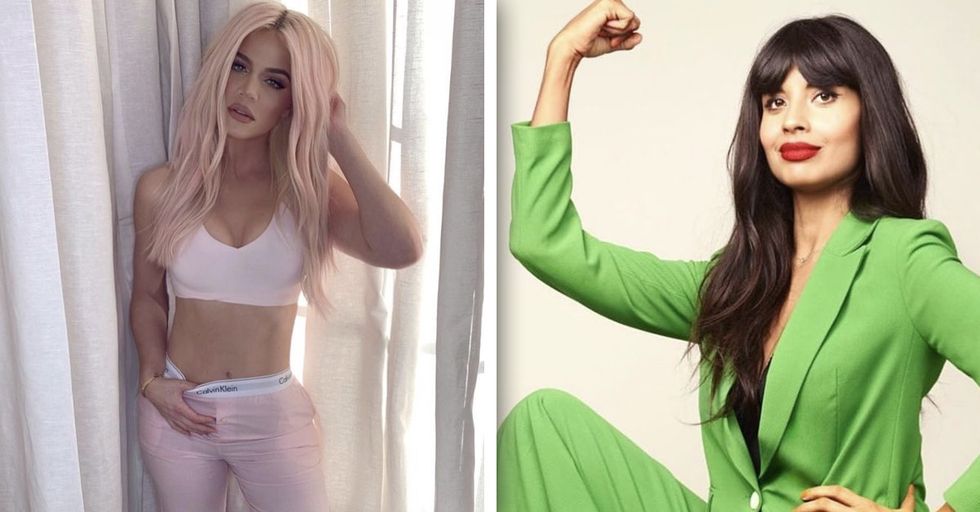 With great fame comes great responsibility. Celebrities have an insane amount of influence over their fans and the general public. When a normal person posts something on social media, it's seen by an audience of a few hundred probably. But when a celebrity with millions of followers posts anything, the impact of it can be very intense.

Because celebs have millions of followers across their social media platforms, they often do paid partnerships with different brands and companies. This makes them a pretty penny - whenever they post something, promoting a product or company, there's usually an #ad at the very end, letting everyone know this is a paid gig. (Unless of course they're promoting something they just simply want to promote, and they usually call it out that it's not a paid partnership).

Being the social media queens that they are, the Kardashian-Jenners often post partnerships with brands to promote different products, and they're also heavily criticized for it. The Good Place actress and activist Jameela Jamil recently called out Khloe Kardashian for promoting a "flat tummy" shake on her Instagram page.

Khloe Kardashian is part of one of the most famous families in the world.

She's the youngest Kardashian sister and older sister of Kylie and Kendall Jenner. You're probably very aware of who Khloe is.

The Kardashian-Jenners have millions and millions of followers on Instagram.

A whopping 129 million follow Kylie on Insta and a massive 132 million follow Kim. Their social media presence, along with their hit show Keeping Up With the Kardashians, has this family constantly in the spotlight.

Not to mention the recent drama surrounding Khloe.

The "Good American" founder has been making headlines because of her ex-boyfriend and father of her baby, Tristan Thompson, cheating on her yet again.

Khloe's personal life is constantly in the headlines.

But she's also an incredibly successful businesswoman. She's always hustling, and often brings the humor to situations on KUWTK.

She's also never been afraid to flaunt her stuff.

Khloe is very open about her fitness journey and lifestyle. She works out hard, and because she's been in the spotlight for so long, everyone's seen her physical changes.

If you watch the show, you see Khloe and her sisters working out...a lot.

Khloe's apparel line, Good American, has its own dope workout gear that she often sports and promotes on her Instagram.

The Kardashians are also known for their use of filters and photoshop.

In all of their Instagrams photos, their skin is impossibly smooth and their proportions look almost cartoon-ish.

There's no doubt that they work hard for their bodies...

But the proper filter, pose, lighting and Facetune can work wonders on any photo.

The Kardashians are known for their absolutely flawless photos.

And it comes across as an impossibly high standard. Who looks that perfect, all of the time?

Working out and eating healthy is important, of course, and the Kardashians often talk about both of these things on their show and in their 'grams.

But sometimes they promote different detox teas, shakes or vitamins, and you have to wonder: are they really using these things?

"These meal replacement shakes are so effective and the results I’m seeing and feeling are amazing - I’m super excited for the next few weeks," she captioned this photo from September.

"The flat tummy bundle by @flattummyco is definitely helping to keep my weight from fluctuating. Stress affects my body in various ways (weight included?) but I feel tight, toned & fab with their new Chocolate Shakes," she wrote, posing to show off her figure.

It's a family affair.

Even though Kim works out nearly every day with a personal trainer, on January 2 she posted an Instagram promoting a Flat Tummy Co shake. "These meal replacement shakes are so good and they're helping me get my tummy back to flat," the caption read.

Kris Jenner's on board.

Did you really think there'd be a deal without Kris Jenner involved? Think again. Two days ago, the famous momager posted her on picture promoting the shakes. "#ad Day 7 on @flattummyco’s meal replacement shakes and I am feeling slimmer than I have in a looong time," the caption read.

Even organic-obsessed Kourtney has a partnership with the controversial brand.

"Day 3 on the program and I’m already feeling good again. I’m starting to see my tummy toning up nicely," her caption reads.

And actress and activist Jameela Jamil is having none of it.

Jamil posted a comment on Khloe's picture that garnered a lot of attention.

"If you're too irresponsible to: a) own up to the fact that you have a personal trainer, nutritionist, probable chef, and a surgeon to achieve your aesthetic, rather than this laxative product...And b) tell them the side effects of this NON-FDA approved product, that most doctors are saying aren't healthy. Side effect such as: Possible Flat Tummy Tea side effects are cramping, stomach pains, diarrhea and dehydration...then I guess I have to," the comment began.

Jamil then went on to point out that the toxicity of the entertainment industry.

"It's incredibly awful that this industry bullied you until you became this fixated on your appearance," she continued.

"That's the media's fault. But now please don’t put that back into the world, and hurt other girls, the way you have been hurt," she continued.

"You're a smart woman. Be smarter than this," she finished.

Jamil has been incredibly outspoken when it comes to body positivity and fighting back against photoshop, fat-shaming and fat-phobia.

The actress and activist began the "I Weigh" movement, "for us to feel valuable and see how amazing we are beyond the flesh on our bones."

Every post is dedicated to helping people love themselves just as they are - free from diets, detoxes and photoshop.

"Tomorrow we are going to drop our interview together in which Sam Smith is going to rip out your heart, and kiss it. This interview is such a privilege to have been a part of. I love sam. I can’t believe I only just found this gem. Sam’s a magical unicorn and I’ve never seen anyone talk about their body issues the way Sam does here," she wrote.

Every single thing Jamil posts is to empower, educate and help others.

"Airbrushing is the devil," she wrote in the caption of this picture.

Jamil's mission is to help others love their bodies right now, in this very moment.

Which is hard to do, especially when we're constantly fed pictures of photoshopped celebrities with flawless skin and perfect bodies. How can anyone live up to that?

Jamil is a force that cannot be stopped.

And why would anyone want to stop her? She's paving the way and helping young people realize their worth.

And she does not care about the haters out there.

Her confidence, attitude and passion to educate is inspiring.

"Join the revolution against shame."

Can you imagine if we lived in a shame-free world? What would that look like?

People are constantly encouraged by her.

While some celebs are making millions of dollars off of their Instagram posts promoting shakes and teas that aren't even approved by the FDA, Jamil is using her influence and voice to change how society treats physical appearances.

She's here to remind us all that we're more than just our bodies.

And she doesn't care how famous you are -if you post about a stupid detox tea or milkshake, she's going to call you out. Jameela Jamil is the superhero the world needs right now. Share this with a friend!