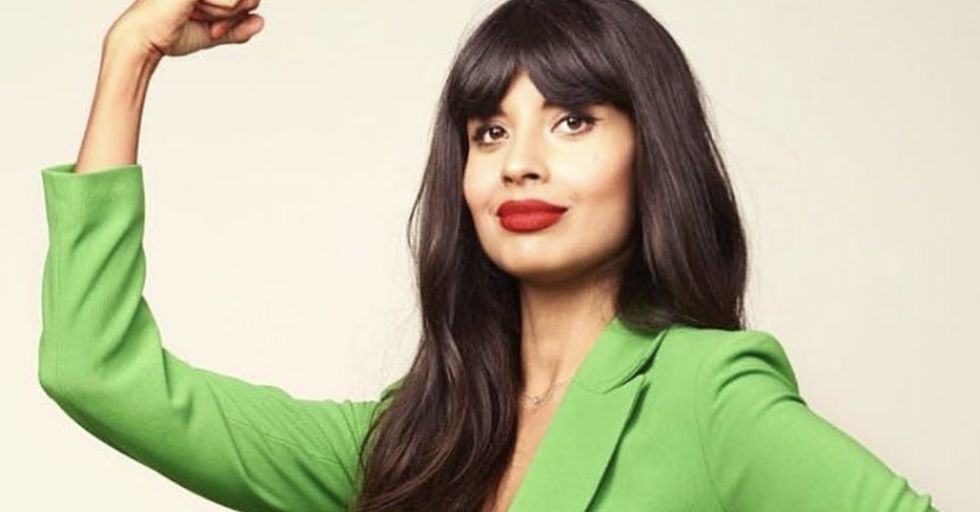 If you're a woman, it's likely that you know the hazards of saying no when a man asks you out. You're never certain how he'll react, and worse, you're always aware that it could get violent. Jamil broke the silence that many women keep by sharing a story of harassment on Twitter. Her openness was enough to inspire dozens of others to share their stories.

Dudes out there: you'll definitely want to read this one because you have no idea what it's like. It's time for us to talk about it: saying no isn't an invitation for violence.

If you're not familiar with our girl Jameela Jamil...

You're about to fall madly in love.

At least according to Eleanor on 'The Good Place' who won't stop talking about her legs.

But she's more than a pretty face.

She's taken a hard look at everything from diets...

She's a relentless cheerleader for other women.

Yes you ARE beautiful.

So it's no surprise that she's got people buzzing again.

And her latest topic? It's an important one.

Jamil breaks out a story that's all too familiar to many of us.

Man asks her out. She says no. Man threatens her and starts yelling. Gross.

Even though she kept her tone light...

The stories that came afterwards were anything but.

Followers quickly pointed out the particularly gross part of the story.

@jameelajamil It’s gross that you had to mention that you were already taken by another man (we’ve probably all don… https://t.co/FzVJymxaBD
— Snarky 🤨 Twin (@Snarky 🤨 Twin)1553471207.0

She had to include a boyfriend when she said no, or the pursuer wouldn't respect it.

Which prompted an even MORE terrifying story.

In which Jamil was punched in the face for saying no to a man. What the heck dudes?

It turns out that tons of women feel like they have to do the same thing.

Without that magical word "boyfriend" men won't take no for an answer.

Other people found resonance in the fear Jamil brought up.

You never know if a guy will take rejection normally or if he'll punch you in the face.

And if saying you have a boyfriend isn't enough?

@jameelajamil @anyabelisle @SnarkyTwin I have a standing policy with platonic male friends that if I’m feeling unco… https://t.co/ygxpNo8CWN
— Christina (@Christina)1553472800.0

Just use a friend to pretend you do.

And that's the point at which guys started to chime in.

Some of them have had the experience of running interference for their female friends.

The stories just get more and more wild.

Even though the ending is cute, the beginning is horrifying.

If you think women can keep themselves safe by always saying they're taken?

You'd be wrong, as this server attests.

She must be a lesbian, or she'd clearly be into you.

Even though the thread is full of awful stories...

Jamil still managed to pull out a positive message: let's learn how to handle rejection.

When we build up romantic love so far, romantic rejection feels like a rejection of your whole self.

And when it feels like someone is saying you're worthless?

It's easy to turn into a rage monster.

So if we know why people do it, how do we fix it?

We can actively teach our kids that rejection isn't a bad thing.

It's a normal part of life.

No one owes you their romantic affection.

And it turns out: not everyone will like you. It's ok!

There are probably some people you don't love.

And that doesn't make them bad either.

A mom on the thread hopped in to give some great advice.

@jameelajamil Talking to my young boys about this at the moment and explicitly teaching them “if you ask out a girl… https://t.co/GtjgB9ZQMf
— Victoria Evans (@Victoria Evans)1553471753.0

Also she gives us the quality insult "assclown".

Kids pick up on what their parents accept or don't accept.

@jameelajamil Thing is - they just get it. They’re a few years away from this anyway but never have they said “mayb… https://t.co/ftRH5IzIxk
— Victoria Evans (@Victoria Evans)1553472801.0

So if we make it clear it's not ok to yell, assault, or threaten someone? We'll get different results.

So despite all these awful stories...

Remember that we can make it better.

Talking about it is the first step.

Which is just one of the reasons Jameela Jamil is our woman crush.

Thank you for starting important conversations.

And sorry that assclown threatened you.

Now let's go out and keep the conversation rolling.

We can make the world a better place. While also loving Jameela Jamil's beautiful face.