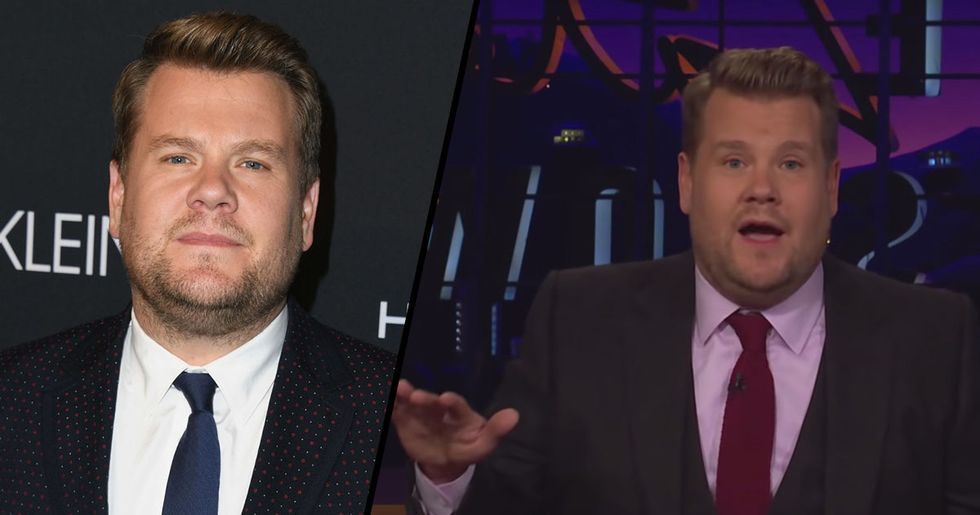 James Corden is a British national treasure that has gone on to win the hearts of fans across the Atlantic, here in the U.S. The star is known for his role as Smithy in the hilarious Gavin & Stacey, for his current global success as host of the Late Late Show, and, of course, the infamous Carpool Karaoke, which never fails to go viral.

But, what the actor and presenter isn't best known for is weighing into social issues. However, after seeing a segment from Bill Maher about why "fat-shaming needs to make a comeback," (yep, horrendously misinformed and ignorant) the star couldn't stay silent on the topic.

So, last Friday, Corden addressed the issue on his show, delivering a very powerful response to the comments, as well as talking candidly about his own experiences.

We live in a world full of body ideals.

In the era of social media, it's easier than ever to get a glimpse into the filtered lives of millions of users across the globe and compare ourselves to them, whether that be looks-wise, body-wise, or even when it comes to material things. It's no wonder that many of us are so self-conscious.

Though body-shaming has been around for years, when social media came along, people were able to post hurtful comments online anonymously, without any regard for the repercussions.

Fat-shaming is a growing issue.

Making someone feel ashamed of their weight isn't only hurtful and damaging to their mental health, but it also, despite what you may believe, doesn't "motivate" someone to get "healthier."

In fact, it has quite the opposite effect.

Fat-shaming simply makes people feel terrible about themselves, not to mention encouraging unhealthy eating habits such as binge-eating, restricting, and obsessive dieting.

Basically, nothing good comes from being unkind to people.

Though this clearly isn't rocket science, many people can't seem to understand the effect that their words have, especially online, where it's easier than ever to hide behind a screen.

Which is why the body positivity movement is on the rise.

The newest cover girl for Cosmopolitan UK is none other than model and body-positive activist Tess Holliday… https://t.co/pKXv98z55M
— BuzzFeed News (@BuzzFeed News)1535688120.0

Earlier this month, Bill Maher made some controversial comments about fat-shaming.

During an episode of HBO's Real Time, the television host caused a stir after he essentially said that fat-shaming should make a comeback.

His comments were massively uninformed and damn right cruel.

During the episode in question, the host took some time away from the usual routine of interviewing celebs to dedicate a segment to obesity.

During his rant, he informed viewers that "fat isn't a birth defect."

“Nobody comes out of the womb needing to buy two seats on the airplane," he added.

He turned the issue towards healthcare.

He went on to explain that “the problem with our healthcare system" isn’t its ridiculously high cost or the fact that it fails to serve a country struggling with a staggering poverty rate, but that “Americans eat sh*t, and too much of it." "We scream at Congress to find a way to pay our medical bills, but it wouldn’t be nearly the issue it is if people just didn’t eat like assholes."

“Fat-shaming doesn’t need to end. It needs to make a comeback," he said. We don't recall it ever leaving in the first place?

Of course, his comments riled the internet up.

Late to the game but to @billmaher some fat people have conditions that lead to the weight gain. Like lymphedema. M… https://t.co/xsoci6anXp
— Marissa Shirley (@Marissa Shirley)1568633408.0

Many pointed out his sheer ignorance towards the issue, including the fact that there's a multitude of reasons why someone may be deemed "overweight," both mentally and physically.

Though Corden isn't usually one to delve deep into societal issues, it seems like, this time, he couldn't stay silent.

On Friday, Corden addressed the fat-shaming comments on his show.

In fact, "addressed" is probably an understatement...the star well and truly slammed Maher for his ludicrous comments, delivering the most heartfelt and brutally honest response.

Here's what he said:

He kicked off his response by saying that he was addressing Bill Maher’s comments about fat-shaming and how it had “gone away and needed to make a comeback."

While insisting that he has always respected Maher, Corden said that he couldn’t stay silent about the issue.

“Fat-shaming never went anywhere," he said. “Ask literally any fat person. We are reminded of it all the time. On airplanes, on Instagram, when someone leaves a pie on the windowsill to cool."

Corden continued by quashing the misconceptions surrounding being overweight.

“There’s a common and insulting misconception that fat people are stupid and lazy and we’re not. We get it. We know. We get it that being overweight isn’t good for us. And I’ve struggled my entire life trying to manage my weight and I suck at it. I’ve had good days, and bad months," he explained.

In a very Corden-esque manner, the host still managed to inject a bit of humor into the topic.

"We’re not all as lucky as Bill Maher. We don’t all have a sense of superiority that burns 35,000 calories a day. I kid because I love. "Bill, I sincerely believe that what you think you’re offering here is tough love and you’re just trying to help by not sugar-coating the reality for fat people. Even though you know how much fat people love sugar-coating things."

He then explained that shaming people only leads to things like depression, anxiety, and self-destructive behavior.

“We’ve come up with this term ‘fat-shaming’, we’ve made a name for it. Let’s be honest, fat-shaming is just bullying. And bullying only makes the problem worse." He also cited miseducation and poverty as 2 of the main reasons for the obesity "epidemic." Concluding his response, Corden said: “Bill, please hear me when I say this: while you’re encouraging people to think about what goes into their mouths, just think a little harder about what comes out of yours."

Watch the full 7-minute response below.

And if you want to read more about people who are shutting down fat-shaming in the best way, keep scrolling to learn how beauty blogger, Callie Thorpe, demolished the hypocrisy of fat-shaming through 1 powerful tweetstorm.