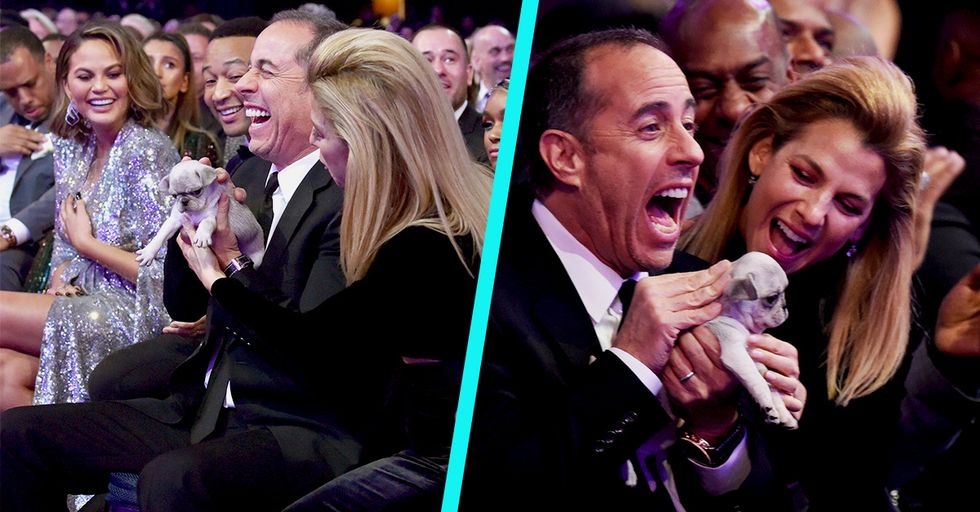 If you think about it, there are no real losers at the Grammys.

The people who get up on stage are all – for the most part – massively famous successes who routinely ink multimillion dollar deals and fly around in private jets. If they don't win a Grammy, they don't necessarily lose, since they can always say they were nominated for one.

Also, if they do in fact lose, they can cry about it on 500 thread count sheets while being massaged by twin masseuses named Svetlana and Irina. The point is, there are no real losers at the Grammys.

However, if there were any people that felt salty this year, host James Cordon had the most innovative solution – puppies!
That's right – as consolation prizes, people were getting puppies to hold onto during the remainder of the awards. Now, whether they can take them home is another story, but we're assuming that's the case.
For the first round, Jerry Seinfeld got Roxy who is "a biter," according to Cordon. Seinfeld lost out to Dave Chapelle in the comedy category, so he got a puppy.
So, apparently, did Sarah Silverman and Jim Gaffigan, whose puppy, Ruby, who wasn't potty-trained, according to Cordon. All the puppies looked very happy and well-adjusted, and we certainly hope they'll find homes by the end of the night.